“In Search of Clean Water” Expedition is a pilot initiative developed by NGO “Ecoaction” and local activists who have been collecting data on physicochemical characteristics of drinking water in their communities. The team’s goal was to study the condition and quality of ground and surface water in the rural areas, spread the environmental information that is socially significant, and popularize the practice of public environmental monitoring.

14 UTCs (United territorial communities) from 10 regions (oblasts) from the northern, central and southern parts of the country, located in the basins of Pivdennyi Buh (Southern Buh) and Dnipro rivers were represented in the expedition. 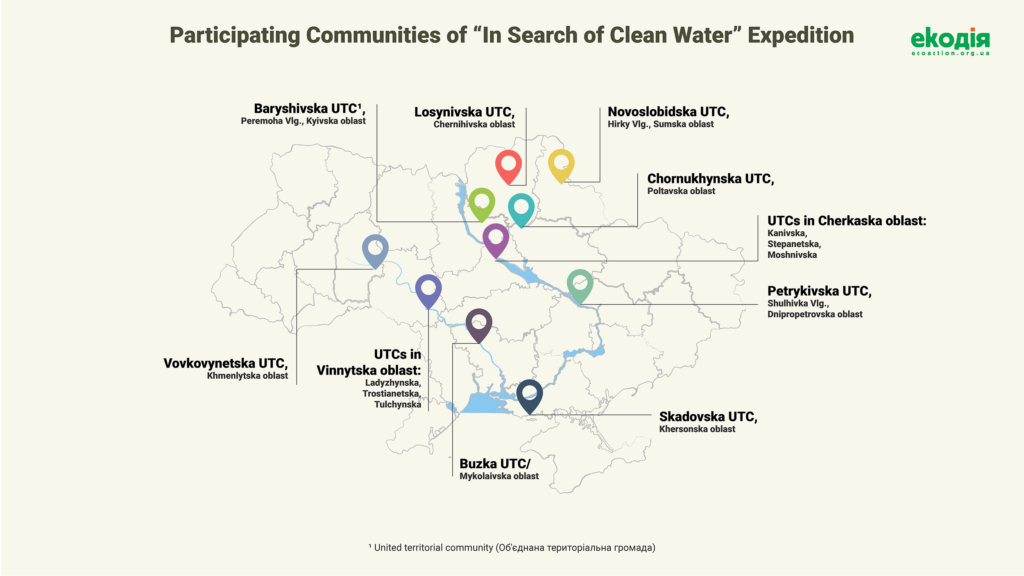 The testing points for water sampling were selected in conjunction with the communities’ representatives. Those were waters from the groundwater sources, namely wells and boreholes, used for drinking and household needs. Waters from the surface sources (rivers, streams, lakes, canals, and ponds) were tested as well. The number of water samples obtained from each community ranged from 5 to 13, with an even distribution between surface and groundwater sources. A total of 139 locations were tested, including 42 wells, 51 boreholes, and 46 surface water bodies. Details on each of the locations can be found on our online map.

Distribution of sites for water sampling among the communities is uneven: in some cases, the sampling locations were divided among the several villages of the same UTC, in other cases all the sampling were situated in one specific settlement of the community.

Among the whole body of data, pH and copper levels were within normal range, not a single aberration found in the groundwater, so further information and data analysis cover only the indicators with aberrations, namely: water hardness, ammonium (NH4), nitrites (NO2), nitrates (NO3); phosphates (PO4), and ferrum (Fe). 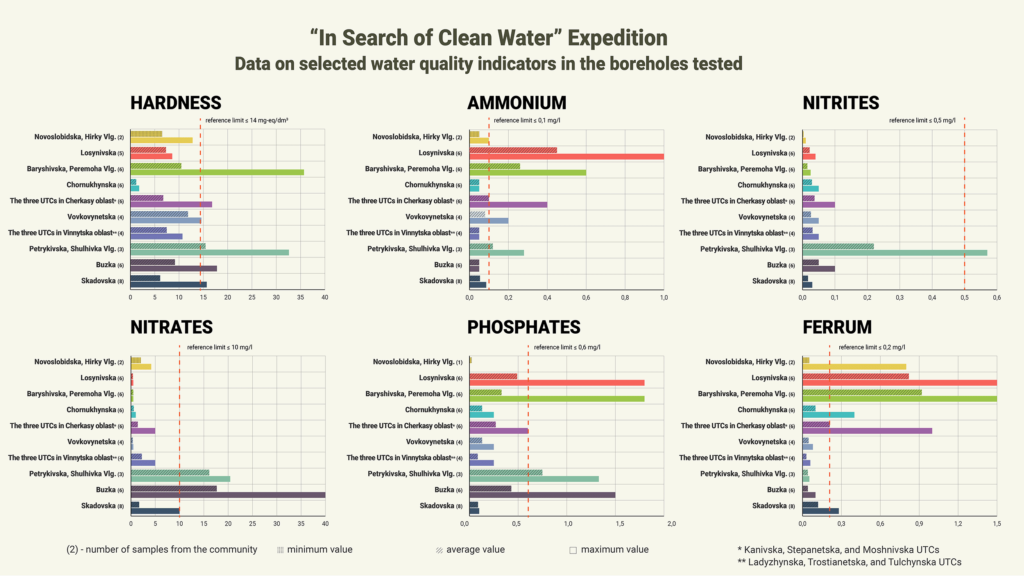 Hardness in 10% of the water sources was either borderline or above the norm (14 mg-eq/dm3). Exceeded hardness was documented in boreholes in five communities. The highest values of hardness were found in the villages of Peremoha (Baryshivska UTC) and Shulhivka (Petrykivska UTC).

There is a pattern of increasing in ammonium levels from south to north. While every sample from Losynivska UTC (Chernihivska oblast) and Baryshivska UTC (Kyivska oblast) had excess ammonium concentration, the same is observed in isolated cases in the central and southern communities.

Nitrites. Among the communities covered by this study, only one village (Shulhivka, Pertykivska UTC) had excess nitrites levels.

Nitrates. There is a pattern of increasing in nitrates levels from north to south. The highest numbers of cases of excess nitrates concentration were recorded in Buzka, Skadovska, and Petrykivska (specifically, In Shulhivka village) UTCs. In the first two communities, the worst results came from the water samples taken in relatively shallow (up to 40m) boreholes in isolated households.

Ferrum. The ingress of ferrum (iron) into drinking water depends on geological conditions of the area. 60% of the boreholes in the communities covered by this study had excess ferrum concentration. There is a pattern of increasing in ferrum levels from southern no northern regions. The highest levels were mostly observed on the left bank of the Dnipro river.

State standards for well water quality on a number of indicators are considerably lower compared to tapwater and boreholes water, and some indicators, such as phosphates and copper, have no regulation whatsoever. Therefore, we applied the standards for water supply systems and wells, or even the EU standards for drinking water (regarding the phosphates). 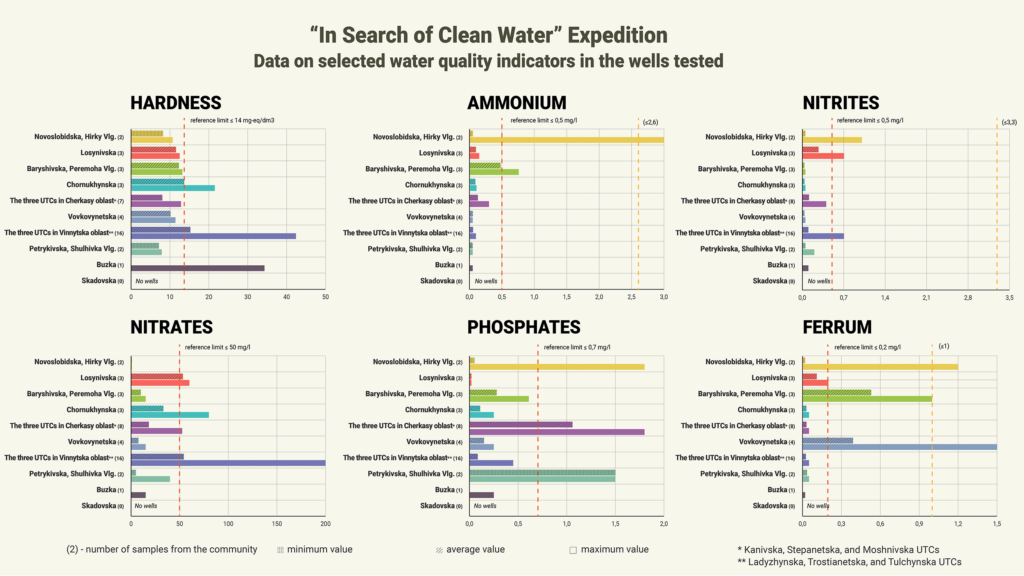 Hardness. The highest levels in this evaluation were recorded in the wells of communities in Vinnytska, Mykolaivska and Poltavska oblasts. Geological conditions of those regions were considered responsible for increased salt levels that resulted in high values of hardness.

Ammonium levels were high in northern communities, namely in Peremoha village (Baryshivska UTC, Kyivska oblast), while in the village of Hirky (Novoslobidska UTC, Sumska oblast), sample from one of the abandoned wells that is not currently used by the populace showed the highest level of ammonium.

Nitrites. Excess nitrites levels (compared to the safety norm for tapwater, 0.5 mg/l) were found in the upper aquifers in three communities. However, the formal limit for well water is significantly higher (3.3 mg/l).

Nitrates. High nitrates levels were found in wells of six communities in four oblasts, besides, the highest nitrates concentration was found in the villages of Trostianetska (Olianytsia village), Tulchynska (Kleban village) and Ladyzhnska (Zaozerne village) UTCs located in Vinnytska oblast. Of the 16 wells tested in those communities, 44% had either borderline levels of nitrates, or levels exceeding the safety limit (50 mg/l).

Ferrum. High levels of this element are mostly observed in the same northern regions that have high ferrum levels in their boreholes, determined by their geological conditions. In Vovkovynetska community (Khmelnytska oblast), one of the samples showed high levels of ferrum.

Samples from the surface waters had the same set of parameters for analysis plus the oxygen levels. In most cases, the oxygen regime met the standards, meaning that the vast majority of the water bodies have favorable conditions for revivng the water quality. However, 10 of the 46 samples showed oxygen levels at or below 4 mg/l, indicating an excessive load on aquatic ecosystems. Samples with low oxygen levels were found in the communities in Khersonska, Mykolaivska, Poltavska, and Sumska oblasts (one case in each), as well I the communities of Vinnytska oblast (two cases). However, most samples with the lowest oxygen levels came from the village of Shulhivka (Dnipropetrovska oblast): four of the six samples had very low oxygen levels.

We classified the natural and the artificial water bodies in terms of the most indicators, and performed ecological evaluation that incorporates several parameters. 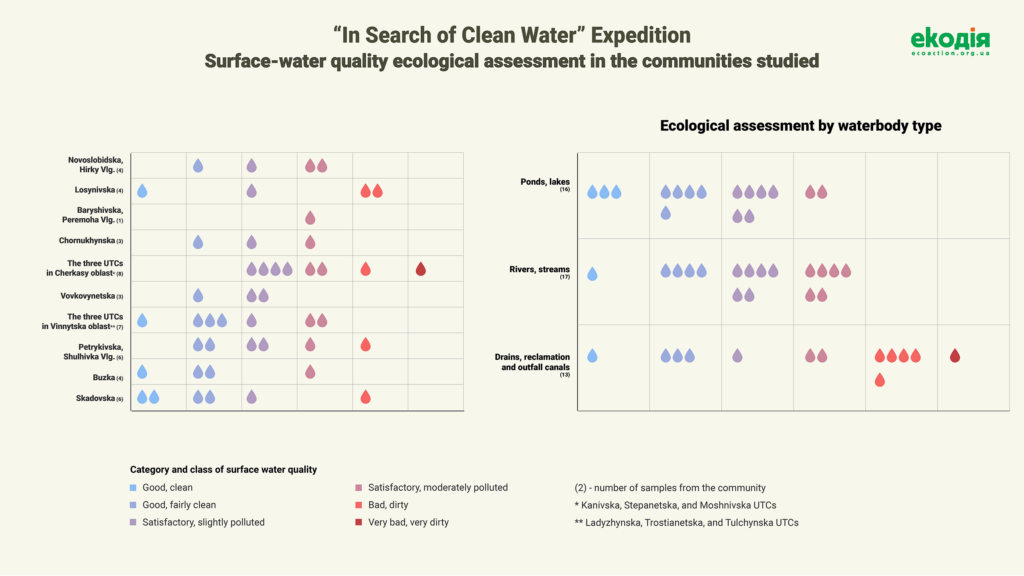 Half of the samples were labeled as “slightly and moderately polluted”, 37% were defined as “fairly clean”, and 13% as “very dirty”. The worst indicators were found in artificial drains, namely canals near agro-industrial facilities and territories.

The largest rivers tested in terms of our Expedition are Dnipro and Pivdennyi Buh (Southern Buh), they fell in the fourth category (“moderately polluted”). However, water samples from Pivdennyi Buh around Laduzhynska UTC (2 different points down the stream) were different: the upstream point is second category, while the downstream point is the fourth category. Further downstream, in Buzka community, the values remain unchanged.

Geographical patterns. With some of the tested indicators, there’s a correlation with the geographical location of the communities of this Expedition. Thus, there’s a fairly clear pattern of higher ferrum levels in the northern regions (in both wells and boreholes). A similar pattern with high levels of ammonium is observed: high ammonium concentration mostly occurred in the samples obtained in the northern communities, with only individual cases in the central and the southern regions. As for the other forms of nitrogen-containing pollutants, such as nitrites and nitrates, their levels have somewhat lower tendency for diffusion in the central and the southern communities. Increased hardness and phosphate levels were a frequent and ubiquitous occurrence.

Thus, excess levels and pollution with nitrogen and phosphorus in different forms is a ubiquitous occurrence in groundwaters. Such pollution often has signs of a chronic one and has many preconditions, as in most of the cases the significant part of the communities consists of farmlands where agrochemicals are applied. Part of those chemicals either seep into the soil or drain into water bodies, contaminating them. Other sources of such pollution include improper practices in livestock waste management, household sewage and other household waste.

Factors of chronic water pollutions also affect the quality of surface water bodies, accelerating the processes of degradation, namely eutrophication ( algae blooming and vegetal invasion). The probable cause for slightly better indicators in surface waters is the transfer of the pollutants downstream, with the flow, and oxidation processes of biogenic pollution.

Climate crisis factor. Climate change affects river runoff, along with nature and intensity of perspiration, which will further increase the risks of even more water pollution and deterioration. Even now the residents of the rural areas, where water wells are common source of water supply,  mention the problem of decrease in groundwater levels and wells  drying out.

The simulation data reveals that Dnipro and Pivdennyi Buh rivers can lose 20 to 30% of their runoff by the end on the century due to climate change. The amount of water is inextricably bound up with its quality. Besides, the more intense and sudden the perspiration is, the more agricultural chemicals are rainwashed (nutrients runoff), thus increasing the pollution of both groundwater and surface water bodies.

At the national level, it is necessary to introduce changes in policies and practices that would ensure systematic monitoring and control of both water use and pollution in  rural areas, as well as allow transition to more environmentally friendly management, farming and household practices. In particular,

At the local level, decentralization has given new powers, tasks and opportunities for the local communities. At the same time, the local authorities often lack the data on the state of environment (water pollution in particular). The lack of data on the gravity of the problem is the reason why the cation on it is delayed. Therefore,