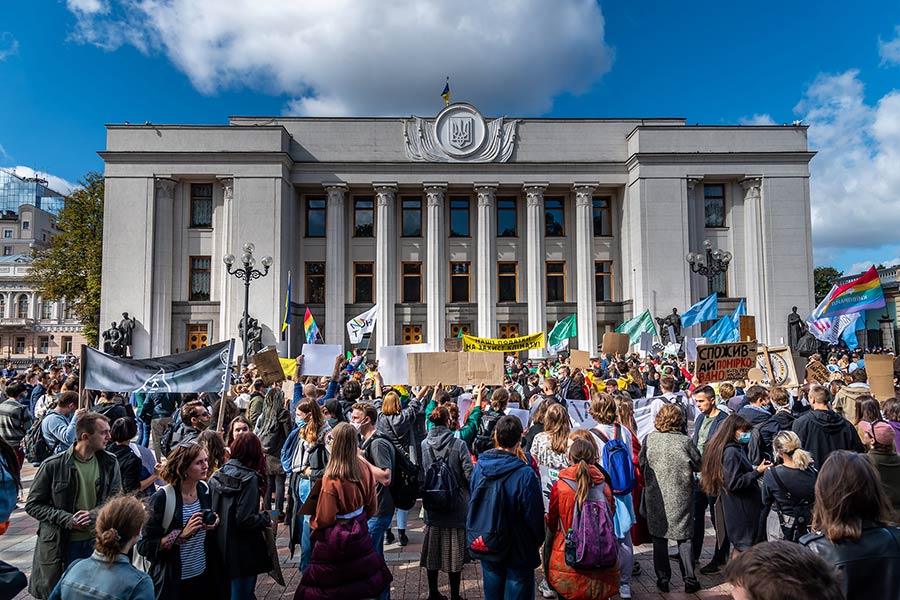 About a thousand people marched at this year’s Climate March to demand more funding for climate change and environmental activities from the authorities. This message was written on the main banner — “Our Taxes for Climate Protection” — on the posters of marchers, and it was included in the official appeal that Ecoaction delivered after the March to the Verkhovna Rada and the Cabinet of the Ministries of Ukraine. However, have the people’s voices been heard, and have environmental problems been prioritized in the 2022 budget? We shall discuss whether politicians have fulfilled the ten environmental requirements of their citizens.

1. Make effective use of funds for adaptation to and prevention of disasters’ adverse effects – failed

The State Budget of Ukraine annually forms a Reserve Fund to prevent and eliminate the consequences of natural emergencies: forest fires, floods, abnormal downpours, etc. This year it had 1.5 billion UAH, of which only 210.6 million had been used by the beginning of November. This is one of the significant failures because already this year, the rest could have been used to prevent the negative consequences of natural disasters, thus saving money in the future.

And even a small victory in this area — the approval of the Environmental Security and Climate Change Adaptation Strategy — is not entirely triumphant since the budget has no funds for its implementation.

2. No subsidies for coal – ignored

29 of 33 state-owned coal mines in Ukraine are unprofitable and totally dependent on annual state subsidies, while their jobs are decreasing annually. Over the last 5 years, they were gradually growing, for which Ukraine spent 1-4 billion UAH annually.

Instead of planning a gradual phase-out of the industry harmful to the climate and burdensome to the state, the 2022 State Budget allocates 3.5 billion UAH for industry restructuring, which means supporting it. In previous years, the funds for “restructuring” mainly covered state debts for payments to mining towns and did not provide any additional development conditions.

Moreover, the Ministry of Energy is developing a “Concept of the State Target Program for Reforming the Coal Industry until 2026”. According to the ministry, the objective of this concept is to “make state-owned mines profitable” and “phase out subsidies”. This kind of work is entirely inadequate to mitigate climate change.

The 2022 State Budget includes a subsidy to local budgets for the just transition of Ukraine’s coal regions of 118 million UAH, which is over 10 times less than the subsidies to support the loss-making coal industry.

In addition, four days before the Climate March 2021, the government adopted the “Сoncept of the State Target Program for the Just Transition of the Coal Regions of Ukraine until 2030”. The program needs 15.7 billion UAH for the next 9 years, of which 3.6 billion UAH must come from the State Budget.

Although the confirmed subvention is still smaller than the declared annual need of 400 million UAH, this is already a victory. For the first time, just transition of the coal regions has received support not only in words but also in the State Budget.

4. Support for renewable energy – none

The authorities have ignored the requirement to allocate sufficient funds to support municipal renewable energy projects. The 2022 State Budget has no funds for this, and the central administration provided no response on this requirement.

5. Energy efficiency – only for the chosen ones

We demanded that at least 40 billion UAH be allocated annually from the state and local budgets to improve energy efficiency in buildings. Only 2.6 billion UAH were allocated from the budget for energy efficiency. Still, there is no money for “Teply (warm) credits” in the budget — the function of this program should now be fulfilled by the Fund. However, it works only with condominiums, so other apartment buildings and private homes will not receive government support.

On November 26, 2021, the President announced a large-scale program of thermal modernization of residential and communal buildings, which aims to attract 100 billion UAH over the next three years to improve energy efficiency. Experts of the Ministry of Economy and the Presidential Office are currently developing its concept.

This is an important and necessary initiative for the energy security of Ukraine, reducing energy bills for people and use of fossil resources, as well as combating climate change. Important that the program concept needs to be discussed with experts and the public to establish a transparent and systematic mechanism for the thermal modernization of buildings.

The development of the state air quality monitoring system is funded through the budget program “Implementation of Environmental Protection Measures, in particular, to improve the environment”. Only 128.8 million UAH were allocated. However, 100 million UAH were added to final State Budget, precisely to purchase and install the necessary air quality monitoring equipment. We will monitor how effectively this system will be implemented.

7. Encourage eco-modernization of the agro-industry – none

When it comes to eco-modernization of the argo sector, the Ministry of Agriculture reports on crop rotations, resource-efficient cultivation of drought-resistant varieties, development of modern soil cultivation technologies, and energy-efficient measures in livestock production, without specifying which ones. At the same time, the state reimburses 50% of investments in the reconstruction of existing and construction of new livestock farms.

One of the challenging sources of greenhouse gas emissions in industrial agriculture is handling of mineral fertilizers and manure. Their use, storage, and disposal are poorly regulated in Ukraine. The solution is to legislate the Nitrate Directive, which has not yet been adopted, with its best agricultural practices.

For the greenhouse gas emissions from agro-industry to be effectively reduced, it is necessary to control the management of agrochemicals and livestock waste, legislate and enforce the best agricultural practices, and make the latest sustainable technologies available for agribusiness.

The state currently does not fund eco-modernization of the agro-industry.

8. Conservation and restoration of ecosystems and biodiversity – critically low

Ukraine needs to increase the Nature Reserve Fund (NRF) area to 30% of the country’s territory; currently, it is less than 10%. However, the funds allocated are insufficient to preserve even the existing NRF.

To achieve its renewed climate goals, Ukraine needs to increase natural ecosystems’ area and change land-use approaches to more sustainable ones. In the next 10 years, Ukraine needs approximately €3 billion for the sector. Thus, the sector’s funding should be at least twice as significant as 2020 or 2021. The 2022 State Budget includes funds for biodiversity and ecosystems conservation, but not for their restoration:

Hence, funding has fallen by about 155 million UAH compared to 2020 and is definitely not reaching the necessary figures. However, there are funding sources available — for example, the environmental tax alone paid by polluters brings about 4 billion UAH to the budget.

On November 30, 2021, the Verkhovna Rada adopted Law No. 5600, which triples the carbon tax rate to 30 UAH per ton of CO2 from January 1. It is now essential to ensure that carbon tax are used exclusively for effective measures to reduce greenhouse gas emissions and protection of the environment.

The implementation of the renewed climate goal will require €102 billion by 2030. During 2019 and 2020, almost €1 billion was collected from the tax. An increased tax on CO2 emissions could be another source of funding for implementing the adopted targets.

To implement climate target one of the solution could be a separate fund, the money from which will be spend on specific emission reduction and adaptation goals. Or other mechanisms may also be developed to achieve the climate target.

So far, funds for safe closure of nuclear power plants have been accumulated in the Financial Reserve for the Decommissioning of Nuclear Power Plant Units, which has not enough money to close even one of the 15 existing units. These funds do not protected against inflation. The Ministry of Energy is working on documents to help protect them from depreciation by investing in securities. However, increasing the Fund’s financing and attracting additional investments are still disregarded.

The Climate March 2021 has shown the government that environmental conservation is vital for people. It has provided additional arguments for important decisions: the tax on CO2 emissions has been raised, the budget for air quality monitoring equipment has been increased, and funds for thermal modernization have been allocated. Due to the efforts of experts and activists at the national and international levels, politicians start a discussion about the just transition in coal regions. For the first time, and the State Budget of Ukraine includes funds for it.

The more people influence politicians in the fight for environmental protection, the faster the environmentally friendly initiatives will be implemented.