“There is no Planet B” – Ukrainian youth organised a climate strike 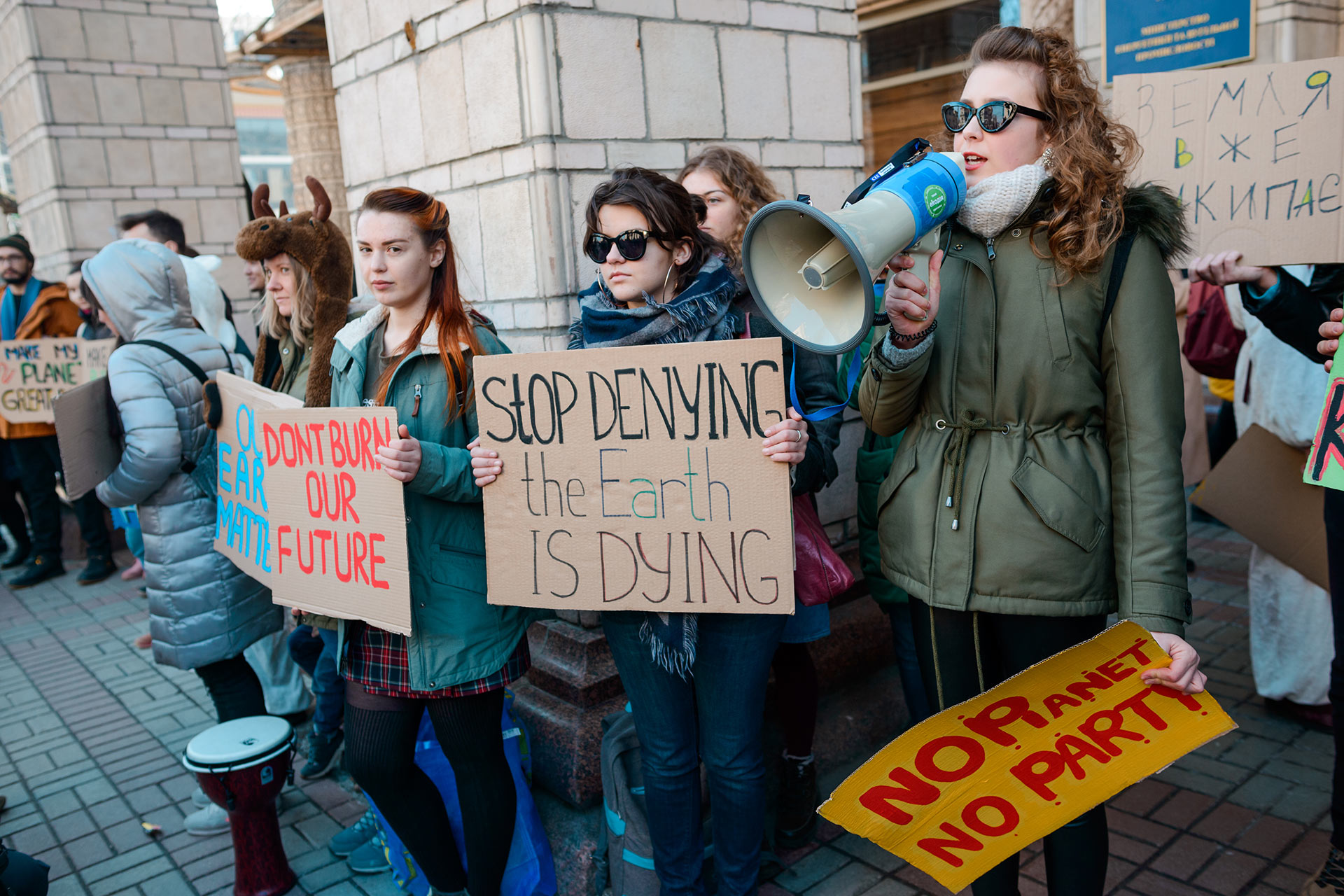 On 15th March at 11 a.m. near the Ministry of Energy and Coal Industry of Ukraine (Kyiv) an action of the youth took place “There is no Planet B!” calling to save the climate and ensure transition of Ukraine to 100% renewable energy sources. The event took place within the Global Climate Strike for Future which is happening this day in more than 100 countries around the world and is the largest simultaneous youth strike in history.

Around 100 people came out to the Ministry of Energy with banners, drums and chants: “We have no Planet B – we need renewable energy!”, “Strike, love and protect the climate”, “Coal, oil, nuclear, gas – we can do without you!” 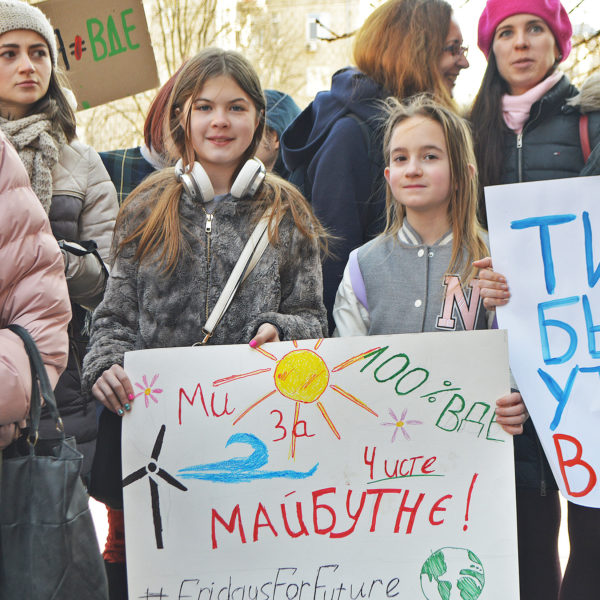 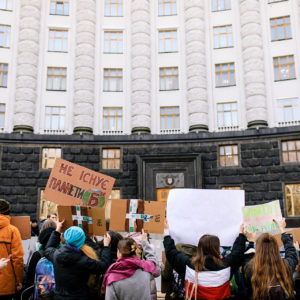 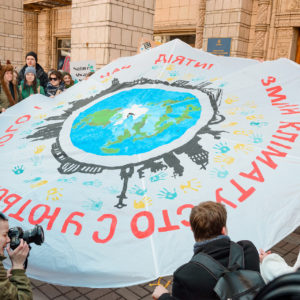 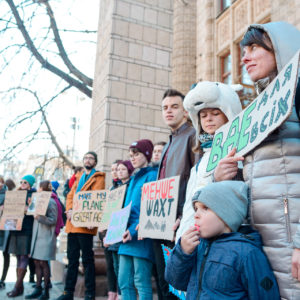 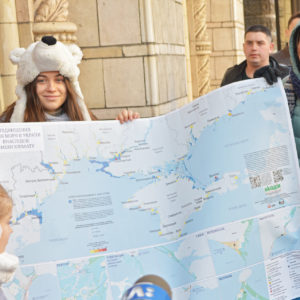 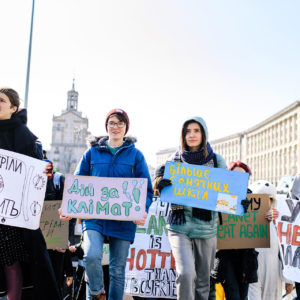 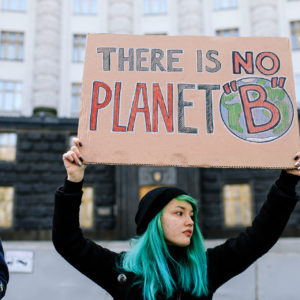 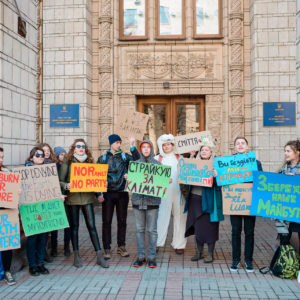 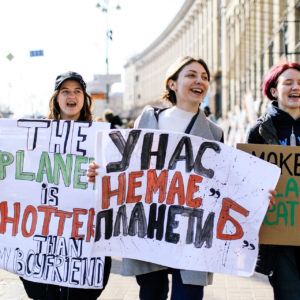 The activists were demanding from the government to draw attention to climate change issue and to start active action, in order to stop global warming at a safe level. The youth is worried because of not ambitious climate policy of the country and a lack of implemented actions directed toward reduction of greenhouse gas emissions. Key demands to the Ministry and the Government are to abandon plans of construction of new coal and nuclear power units, and to favour transition of Ukraine to 100% renewable energy. This is because burning fossil fuels (coal, oil, gas) is the largest source of greenhouse gas emissions which when released into the atmosphere are causing global warming.

“I want more people to understand that climate change is not something that is far away. It happening to us already now, and we have to start solving this problem. Because later it will simply be too late. The processes which are launched now will soon be impossible to halt. Planet’s flora and fauna are suffering. That’s why I came here today and am demanding from the government to act”, – says climate activist Ksenia.

“Climate change is not only about melting glaciers. It is also about droughts and floods. And the youth will have to bear financial consequences of these changes. It is using our taxes that the problems will have to be solved in the future: problems which are created by those taking decisions today. We want to live and develop, not to be compensating the losses caused in the past”, – stated in her speech activist Katya.

In the end of the action, activists handed over to the Ministry a printed map showing possible impact of sea level rise from global warming on the coastal areas of Ukraine.

According to the scientific studies, with current emissions humanity is yet moving toward global warming of more than 4°С till the end of the century. According to the study “Water is close: sea level rise in Ukraine caused by climate change”, 590 towns, 52 thousand buildings, 660 environmentally hazardous facilities, 200 thousand ha of agricultural lands and other areas could be fully or partially flooded along Ukraine’s coastal areas. Moreover, 75 thousand inhabitants of these territories will have to look for a new home.

Today one more strike took place in Kyiv near the government building (Cabinet of Ministry of Ukraine). Similar events also happened in Kharkiv, Dnipro, Zaporizhia, Mykolaiv, Ternopil, Lviv and other cities of Ukraine.

All protests were taking place within the Fridays for Future movement, which was initiated by 16-teen year schoolgirl Greta Thunberg from Sweden. The strike was supported by tens of thousands of students all over the world who went to their parliaments and municipalities with a demand to save their future. Before today, strikes happened in more than 30 countries, and on 15th of March youth came on the streets in more than 100 countries.