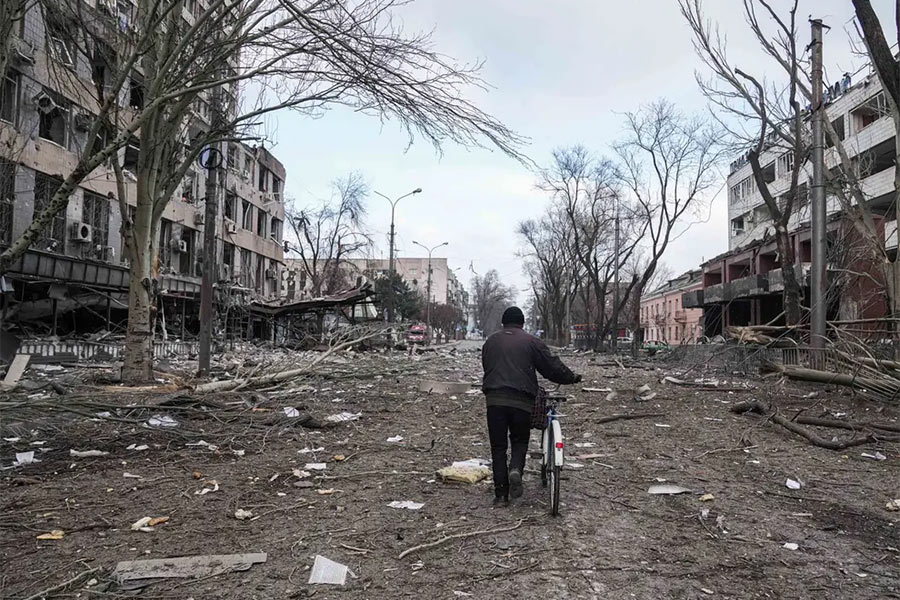 ‘They’re destroying not only people and infrastructure, they also destroy nature,’ says Yevgenia Zasiadko, head of the climate department at an environmental protection group in Kyiv.

Maksym Borodin has spent much of the past decade battling for an improved quality of life in the Ukrainian city of Mariupol. Today, his city is fighting for its very survival.

Situated on the Azov Sea, before the war Mariupol was known in Ukraine for its heavy industry and heavily polluted skies. But in recent years a burgeoning movement of local activists and politicians has been attempting to transform its reputation, working hard to make it a greener place to live.

That progress now looks set to be lost amid the rubble of this city of more than 400,000 people, as Russian forces besiege it and satellite images show utter devastation.

The actions of the Kremlin were subject to international condemnation after an airstrike hit a maternity hospital in the city, reportedly killing at least three people including a child. Residents trapped inside the city say they have run out of water and fuel.

Before the Russian invasion, Borodin, an activist turned politician, was among those who felt that, however slowly, progress was being made on environmental and climate issues in Ukraine.

But as the war enters its third week, the fighting is leaving an ever growing trail of humanitarian and environmental destruction, and the hopes of many environmentalists have largely been put on hold as they scramble to protect their families and defend their country.

“It’s very hard now to even think about pollution, because we’re all concentrated on how to keep our country in one piece,” Borodin, 43, tells The Independent by phone from western Ukraine, having fled the city with his family. “It’s a question of priorities.”

Borodin was among the leaders of the environmentalist movement in Mariupol.

He had been campaigning against air pollution for years before becoming a city councillor in 2015, and later won a national televised competition, and funding, for his air-quality monitoring project in the city.

Under the leadership of its mayor, Vadym Boichenko, the city pledged millions of euros for investment in new public transport and waste infrastructure, created a “Green Council” for residents to tackle environmental issues, and redesigned a square as a “green garden” filled with dozens of plants, from magnolia “Daphne” to Japanese spirea.

“Mariupol is on the path of sustainable green development,” Boichenko told a conference in London in 2019. “We are building a new ecological environment.”

Last year, Mariupol set out a Green City Action Plan as part of the European Bank for Reconstruction and Development’s EBRD Green Cities programme, aiming to address climate change and environmental challenges within its infrastructure. 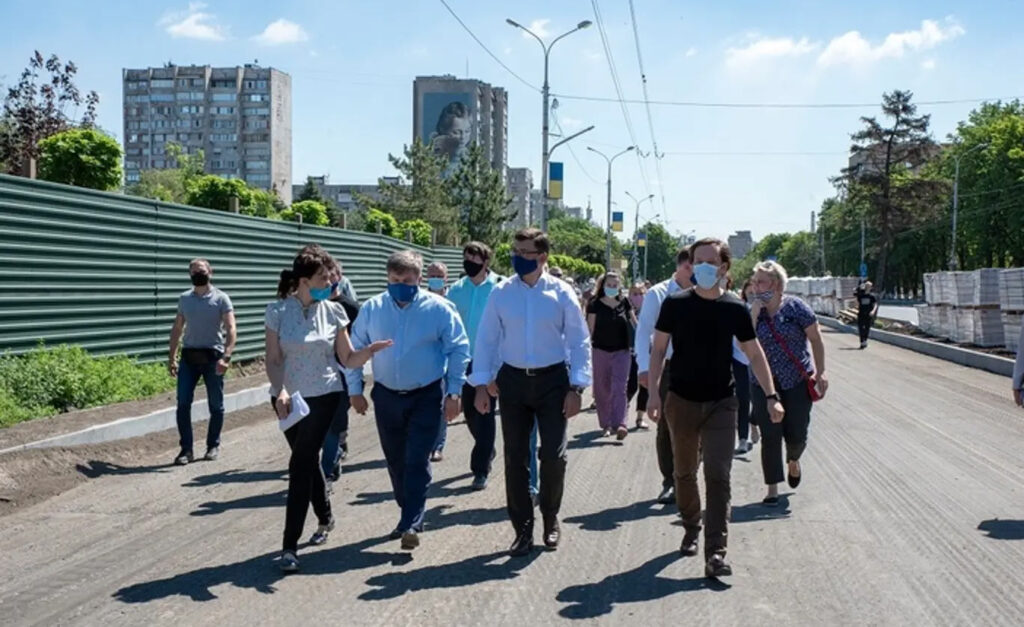 Mariupol’s mayor Vadym Boichenko visits Freedom Square, which was being transformed into a ‘green garden’ of plants before Russia’s invasion

It wasn’t just air quality that concerned residents, but water quality, soil contamination and a lack of green spaces in the city, according to Nigel Jollands, co-leader of the programme.

“They were one of the most engaged cities that we had,” he says.

During his meetings with city officials and residents, Jollands says there was a sense of hope that things were changing, and a sense of ownership and empowerment that they were developing a plan.

“Their vision was to have continuous economic development that went hand in hand with constant improvement in environmental quality and quality of life,” he adds. 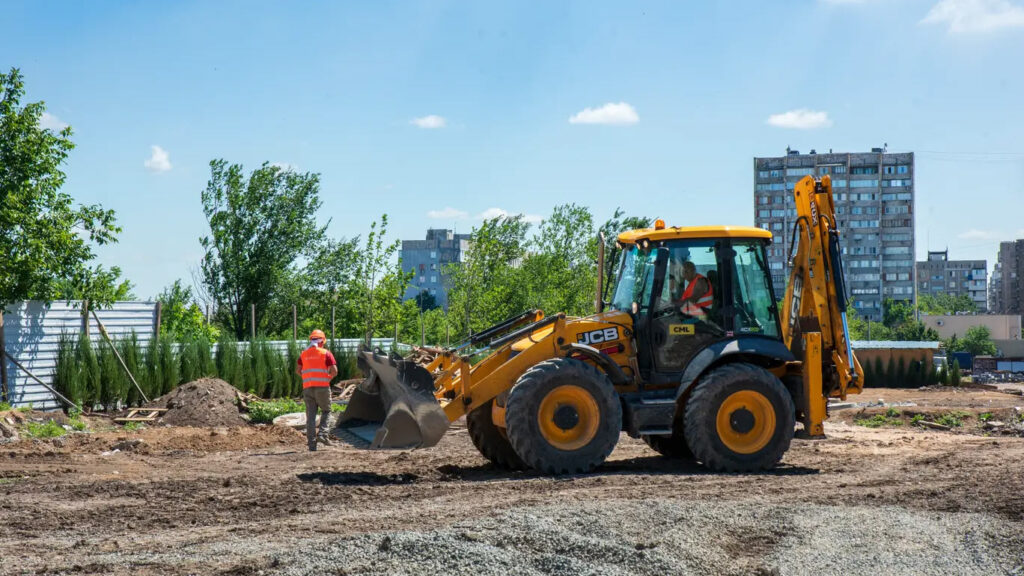 Reconstruction of Freedom Square in Mariupol prior to the invasion

Similar stories of environmental progress can be found across Ukraine. Last year, the country approved an ambitious NDC (nationally determined contribution) committing to reduce emissions by 65 percent relative to 1990 levels.

And there had been high hopes among clean air activists that this year the country’s parliament, Verkhovna Rada, would adopt a law to combat industrial air pollution in line with a European directive on industrial emissions.

“Ukraine made a huge success in [the] last years,” says Mykhailo Savenets, a researcher at the Ukrainian Hydrometeorological Institute in Kyiv, ticking off a long list of climate and environmental initiatives. But then Russia invaded, and the majority of projects were put on hold, he says.

At the same time, the conflict is leaving environmental scars of its own.

Within hours of Russia’s invasion last month, the Conflict and Environment Observatory said it had recorded pollution incidents that placed people and ecosystems at risk of acute and long-term harm.

In its most recent report on 5 March, it said there was “growing concern” over the environmental threats that the highly destructive war posed in a heavily industrialised country. “War damages ecosystems,” Mr Savenets says. “War is a great source of air, soil and water pollution.” 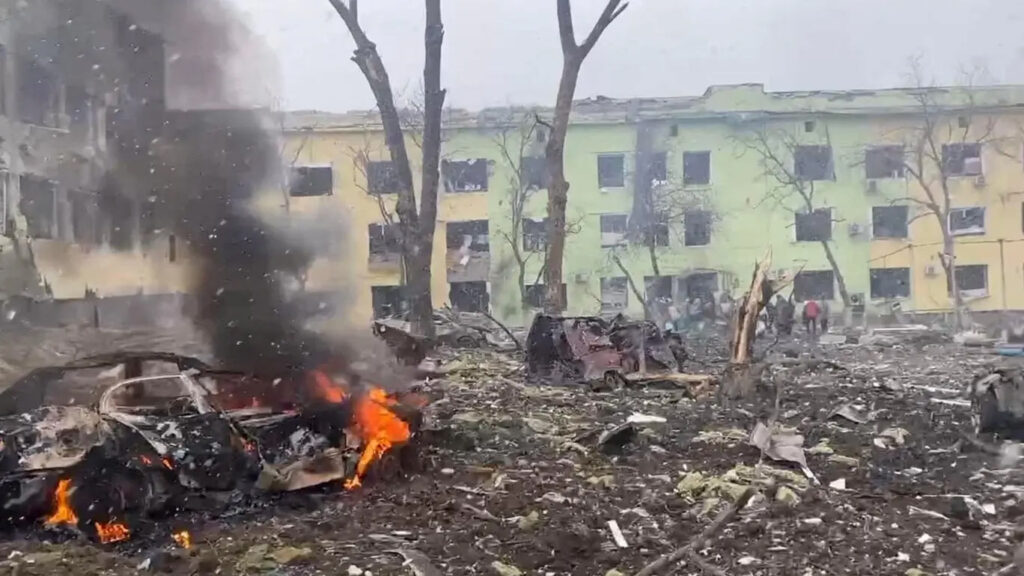 These problems have already reversed environmental progress, he adds, and will need to be solved before Ukraine can re-implement its environmental policies. But, he says, he still holds out hope that when the war ends, Ukrainians will build back better and faster.

Dismay at the growing destruction is a sentiment shared by Yevgenia Zasiadko, head of the climate department at Kyiv-based environmental protection group Ecoaction.

“They’re destroying not only people and infrastructure, they also destroy nature,” she says of the Russian forces.

As for Ukrainians, they are focused on survival.

“Environment today [is] not the focus,” says Zasiadko, who recently left the eastern city of Kharkiv, which has also seen heavy fighting. 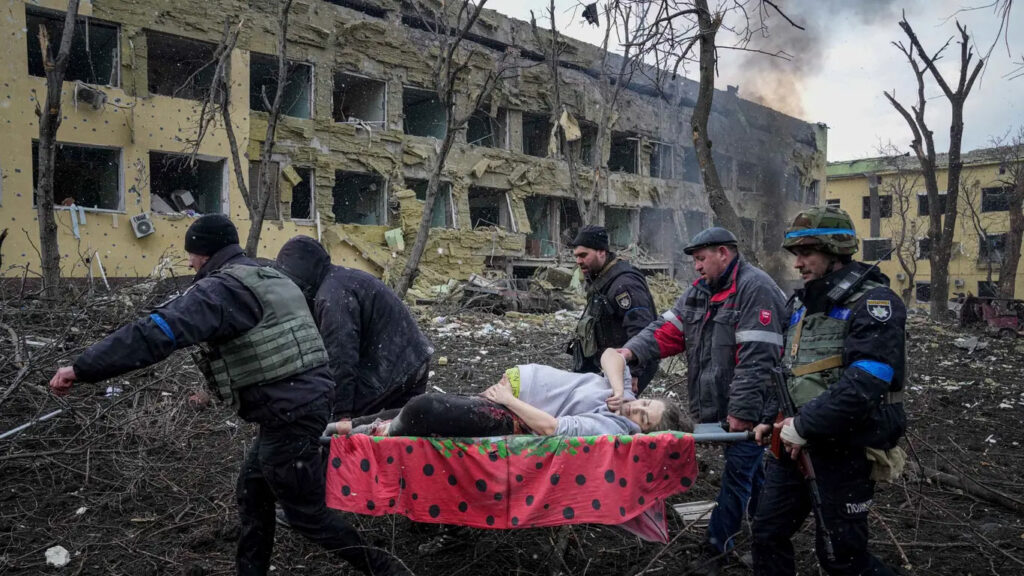 Nor does Zasiadko, 29, believe it will be a priority for Ukraine when the war eventually grinds to a halt. Even if the war stopped tomorrow, the environment, climate adaptation, and emissions reductions would be far down the agenda, she says. Besides, she adds, it was never far enough up to begin with.

However, Zasiadko and other activists are doing what they can. They’re calling on the rest of the world to ban imports of Russian fossil fuels and divest interests in Russian fossil fuel companies, and are monitoring the environmental destruction caused by the war. Zasiadko says she also hopes that once the fighting is over Ukraine will be able to rebuild in a sustainable and efficient way.

Another environmentalist doing what he can to help Ukraine’s war effort is Olexiy Angurets, co-founder of the Dnipro Environmental Monitoring Centre in central Ukraine. The centre was set up to monitor pollution levels, but since the Russian invasion began last month Angurets, 46, says he has focused his attention on nuclear radiation.

So far, he says, levels are normal, but he is concerned that with Europe’s largest nuclear power plant, Zaporizhzhia, and the Chernobyl site both having come under Russian control, things could change.

“We remember Chernobyl,” he says, referring to the 1986 nuclear meltdown.

In a statement on Thursday, the embassy claimed without providing evidence that Ukrainian “militants” had been using the maternity hospital in Mariupol as a headquarters and had driven out all patients from the site. It also described accusations that Russia had opened humanitarian corridors to shell civilians as “beyond cynical”.

Back in western Ukraine, Borodin laments that the war means he will never know to what extent Mariupol’s environmental policies would have helped its residents. They didn’t have enough time to find out, he says.

He hopes that one day, when the war is over, Europe and the United States will help Ukraine rebuild in the most environmentally friendly way possible, with the “best available techniques”.

But for now, the situation in the country is such that Ukrainians are forced to prioritise, he says.

“People are trying to save their lives,” he says. “Mariupol, my home, is … totally destroyed.”