European Parliament shall stop nuclear and gas in EU Taxonomy 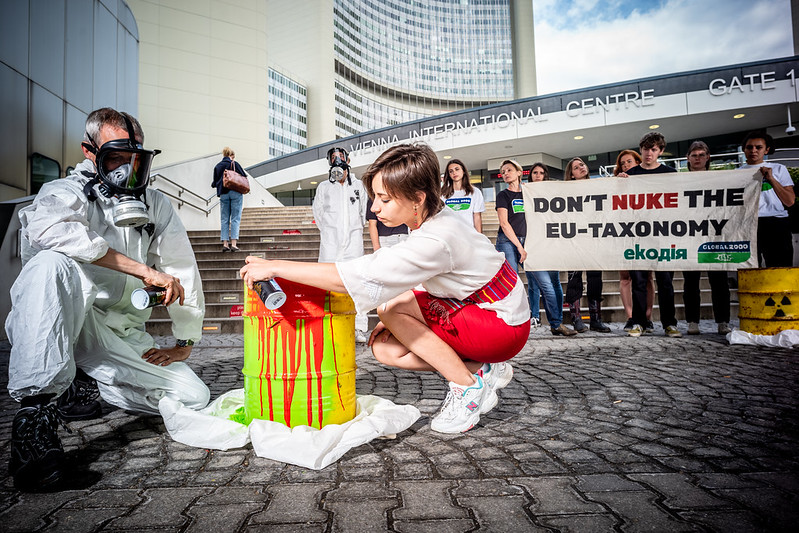 Vienna, 13 June 2022: Today, environmentalists from the Ukrainian Centre for Environmental Initiatives “Ecoaction” and GLOBAL 2000 are protesting in front of the headquarters of the International Atomic Energy Agency IAEA in Vienna. With a vivid action they expose the attempts of the nuclear lobby to smuggle their financially failed high-risk technology into the EU taxonomy for green finances: Symbolic “nuclear waste” barrels are “greenwashed” with green paint by activists, while blood-red paint is used to refer to attacks by the Russian invaders at the Ukrainian nuclear facilities: operating Zaporizhzhya nuclear power plant, the largest nuclear power plant in Europe, and Chernobyl Exclusion Zone.

“The Russian state corporation Rosatom is acting as a nuclear buccaneer – after , the military onslaught on the Zaporizhzhia nuclear power plant, which caused damage to the reactor compartment building and several service buildings, the whole plant was placed directly under Rosatom control,” says Dr. Reinhard Uhrig, anti-nuclear spokesperson for GLOBAL 2000. “This is the first time in history that a nuclear power plant has been captured in a war – but also the first time that a hostile takeover has been carried out by a globally active nuclear corporation that remains involved in the Hungarian Paks II nuclear power plant project and supplies nuclear fuel to European reactors.”

Rosatom is directly subordinate to the Russian government and, as an integrated state-owned company, controls both Russian nuclear weapons and the construction of reactors and, via subcontractors, the maintenance of reactors and fuel supplies. For the activists it is therefore clear: “The EU, all EU states, must impose sanctions not only on Russian energy sources such as oil and gas, but of course also on the Russian nuclear industry,” says Vitana Oliinyk, spokesperson for Green Finance at Ecoaction. “We call on the EU Commission to immediately propose sanctions against the Russian state-owned corporation supporting nuclear terrorism actions in Ukraine – Rosatom.”

The EU Commission’s attempt to include nuclear power with its unresolved nuclear waste problem and climate-damaging fossil gas into the EU taxonomy’s green finance guidelines via the delegated act must finally be stopped. Further subsidies for fossil gas and unsafe nuclear power are only leading us deeper into dependencies on crisis states and into the climate crisis itself. The solution is energy independence through energy efficiency and domestic clean energy.

“Tomorrow, the  Economic Affairs and Environment Committees of the European Parliament will vote in joint session. Nuclear power and natural gas were included into the taxonomy for ‘energy security’ reasons but have already turned out to be the exact opposite, namely a massive threat to the electricity supply of EU countries. In Slovakia and Hungary, more than 50 percent of electricity generation is dependent on fuel supplied by Rosatom – there is no commercially available proven fuel from other suppliers,” says Patricia Lorenz, anti-nuclear spokesperson of GLOBAL 2000. “We call on each and every MEP to consider whether, in the light of this situation, their conscience will allow them to vote in favour of nuclear and gas tomorrow in the Committee and also in the plenary vote in early July.”