The EBRD’s response to the war in Ukraine 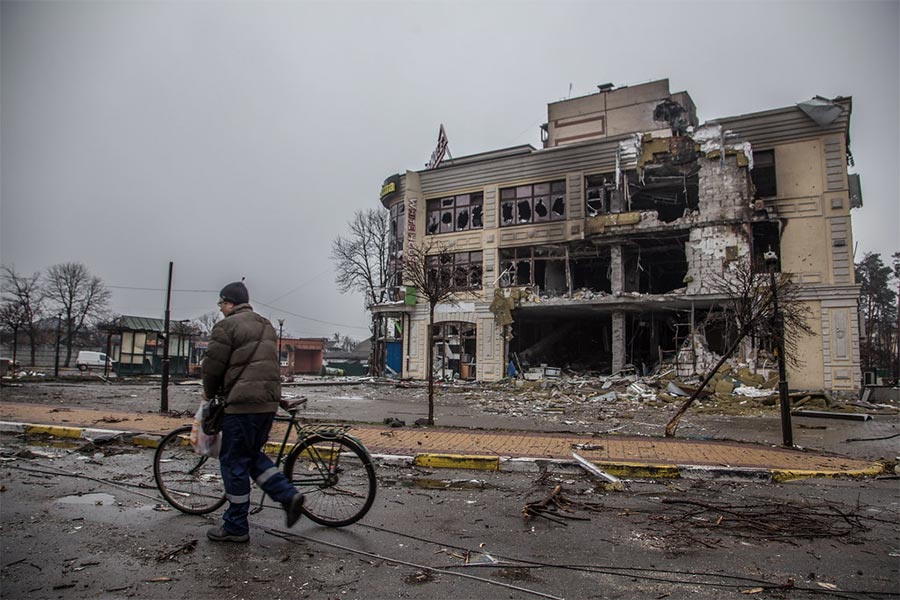 Russia’s war in Ukraine has brought horror and destruction to the country, and has had a tremendous impact on the European Bank for Reconstruction and Development’s (EBRD) regions of operations. The Bank needs to support efforts to address both the current impacts and the future needs arising from the war. Helping Ukraine to get through the war is the most urgent, and the Bank has already joined the international effort to put economic pressure on Russia that can speed up the end of war, and to contribute to the quick recovery of Ukraine’s infrastructure and economy.

Ukrainians have demonstrated readiness to defend their country against Russian aggression, but they rely on the swift response from the international community. The fighting, which involves tens of thousands of soldiers, is ongoing, and the scale of destruction continues to rise. In the areas of the country where Russian forces have retreated, war crimes range from the targeting of nuclear power plants to the rape and torture of civilians. Rebuilding destroyed infrastructure in areas that have been returned to the control of Ukraine is an uphill struggle for local and central governments. There is pressure to make it fast and low-cost, though there is a shared understanding that reconstruction should build a better Ukraine, with more people-oriented, accessible and environmentally-sound infrastructure and cities.

We welcome the EBRD’s quick reaction to the war in Ukraine through its EUR 2 billion Resilience and Livelihoods Framework (RLF). We note the funds provided to the Bank’s existing clients under the RLF for the Food Security Guarantee facility (FSG). We also welcome the EBRD’s support for Ukraine’s neighbours, who are dealing with the influx of Ukrainian refugees. The EU quickly invoked the Temporary Protection Directive to accommodate these refugees. At present, more than 5.1 million people have left Ukraine. Accepting such a high number of refugees in such a short period puts significant pressure on accepting countries. This is particularly true for neighbours like Poland and Moldova. It will be appropriate to provide these countries support in a way that will not cause additional debt pressure.

I. The EBRD’s stance on sanctions against Russia and Belarus

The EBRD stopped considering new loans for projects in Russia following the occupation of Crimea in 2014. The Bank has also said that it did not invest in Belarus following the disputed presidential elections and the crackdown on protests in 2020. In February 2022, the EBRD strongly condemned the Russian aggression, and consequently, the Bank’s Board of Governors decided to suspend the access of Russia and Belarus to the Bank’s resources. It has further decided to close its offices in both countries.

We welcome these steps as a part of a wider strategy to put economic pressure on Russia with the aim of speeding up the end of war. There are several actions the Bank can take to close existing loopholes that allow its money to continue flowing to Russia and Belarus:

European states have largely agreed that the EU should stop importing Russian fossil fuels and came up with the REPowerEU plan, which aims to cut imports from Russia by two-thirds by the end of the year. The European Commission envisages the development of new infrastructure to make this possible. However, this effort should not undermine European climate ambitions by investing in major new gas infrastructure with long payback periods and a lock-in effect. The EBRD’s stated mission is to support its countries to decarbonise by cutting consumption and enabling a prompt switch to sustainable green technologies instead.

It will be expensive for Ukraine to win the war and to restore its economy. Rebuilding towns, transport infrastructure, power plants, schools, hospitals, water infrastructure, etc. will require massive investments. The process will entail many challenges and difficult choices, as it will require proper donor coordination and transparency. For the EBRD, an institution with long experience in Ukraine, it will be important to contribute with long-term and high-quality finance.

Ukrainian officials are already under pressure to rebuild significant areas of the country where the Russian army has retreated. People find themselves living without basic services, such as electricity and water. Although Ukraine should be supported with cash for this rapid response, it will be important to base these investments on a proper assessment of needs, opportunities and the cost and benefits of alternative options for reconstruction. The timely steps that the EBRD has taken thus far to ease the financial pressure on its clients in Ukraine are appreciated.

The EBRD should be clear on its added value for the country’s long-term development. The Bank’s projects should be focused on supporting the best available solutions, practices and technologies. Ukrainian business and municipalities should not go into debt to obtain temporary, low-quality solutions. The Bank should properly asses funding proposals from the integrity and sustainability perspective. In addition, the EBRD should put emphasis on knowledge and technology transfer as well as capacity building for clients on reconstruction that will be economically and energy efficient and will contribute to future climate, environmental and security objectives.

Ukraine is mired in external debt of over USD 129 billion (78.8 per cent of GDP)  and is expected to repay USD 14 billion of it in 2022.  Future loans will be another burden for the country’s economy. We urge the EBRD to consider long-term, no-interest (or very low-interest) loans for Ukraine, especially for projects aimed to assist municipalities. The Bank should work with partners to lower the cost of future projects, including with the help of grants for technical assistance from donor funds. The Board of Governors should also take steps to direct some of the Bank’s profits for this purpose.

Maintaining due diligence, transparency and monitoring

The rush to assist Ukraine in tough conditions brings the risk of simplifying the project appraisal process. Although speed is much appreciated, it is important that this does not come at the cost of quality standards for projects. It will be important for the Bank to maintain transparency for the projects it prepares and to ensure proper public participation in the decision-making process. The environmental and social impacts, energy efficiency indicators, and assessments of clients’ capacities and track records should be maintained to avoid future negative impacts.

The Ukrainian government has made an effort to simplify all of the procedures, including for environmental impact assessment. Although this is understandable in the time of war, it will be important to have safeguarding procedures in place by the time major reconstruction projects are implemented. Should the government delay the process of restoring environmental legislation provisions, EBRD safeguards can serve long-term public interest in their place.

Corruption risks might negatively impact the entire reconstruction effort. A proper transparency procedure is the first step in dealing with corruption, and Bank should not give up on its requirements.

Over the years, the EBRD and EIB have found themselves considering dubious projects proposed by the Ukrainian government as a part of national strategies that were well past their due date. The most obvious examples of this are gigantic energy facilities designed during the Soviet Union as a part of highly centralised energy systems. The Ukrainian energy sector was in need of a strategy update before the war. The push for renewables that happened by 2020 with the introduction of feed-in tariffs was paused, as the state was not able to meet its commitments to investors. The president’s administration insisted on maintaining the electricity tariff by keeping a higher share of state-owned nuclear with an electricity price that does not cover any external and future costs connected to the decommissioning and waste management. There is a concern that new versions of the energy strategy will be prepared based on similar obsolete principles.

Any investment in the energy sector should be done with decarbonisation in mind. The EBRD should not get involved in the development of new gas or oil wells in Ukraine. Instead, it should focus on financing best available approaches to low-carbon energy production. For example, the central heating systems of many Ukrainian towns will need to be rebuilt. This is where the EBRD could be the frontrunner, helping to design and build modern central heating systems that are not based on burning fossil fuels.

Shortly before the war, the Cabinet of Ministers of Ukraine approved the National Action Plan on Energy Efficiency until 2030, which stipulates that primary and final energy consumption in Ukraine should not exceed 91.5 million and 50.5 million tons of oil equivalent, respectively. As a result of Russia’s military aggression, energy consumption in Ukraine has declined significantly. The EBRD must stimulate a revision of the National Energy Efficiency Target to declare a more ambitious one. It will be important that all new projects with EBRD financing have the highest possible standards, demonstrating to the industry and state what is achievable and at what cost.

Distributed energy production is crucial for the development of modern, sustainable energy systems. However, the owners of small, private energy sources face uncertainties in a view of the rocky government policy. This means there is high financial risk for anyone who is ready to invest in private solar or wind energy production.

The EBRD should contribute to funding programmes that channel affordable lending to small businesses and individuals ready to invest in private energy solutions. The decentralisation of energy sources should be one of the priorities for the further development of the Ukrainian energy sector.

Most Ukrainian power plants are operating beyond their designed lifetime with the support of an EBRD loan for the project Nuclear Power Plant Safety Upgrade Program called ‘safety upgrade’. However, the Ukrainian government failed to ensure allocations for the decommissioning of nuclear facilities, radioactive waste management and connected liabilities by the nuclear operator company Energoatom.

The Ukrainian government committed to solving the lack of allocations for waste and the decommissioning funds, as well as to guaranteeing the independence of the Ukrainian nuclear regulator, when it signed an agreement with the EBRD for the safety upgrade loan. The Bank should insist on the rapid implementation of these provisions as crucial elements of the country’s nuclear safety.