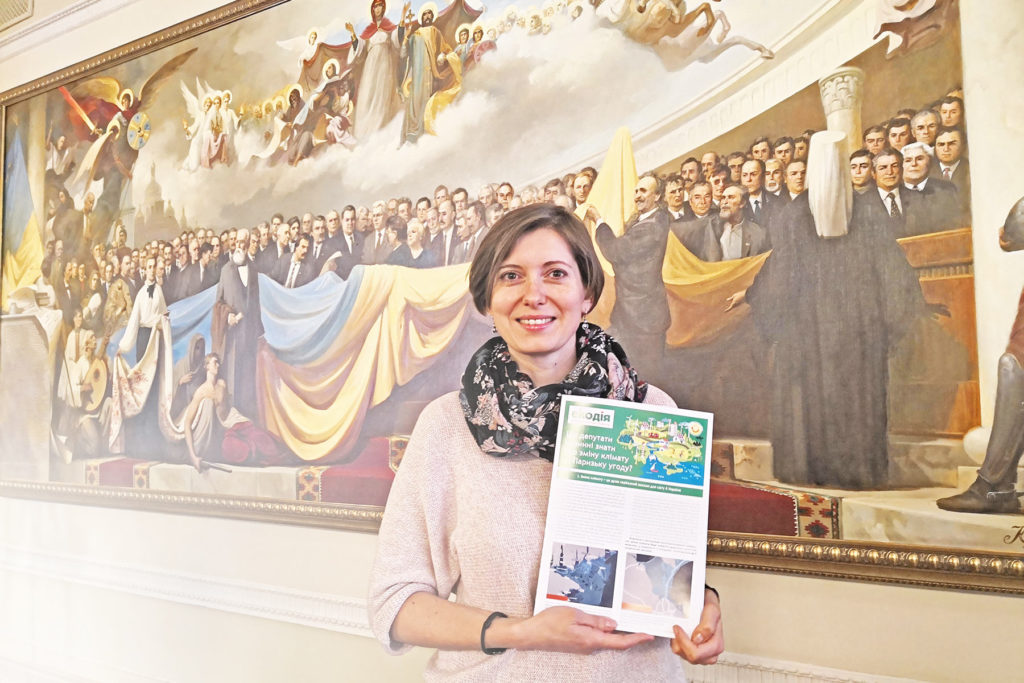 My name is Iryna Stavchuk. I represent an NGO Centre for Environmental Initiatives “Ecoaction” and Ukrainian Climate Network.

I would like to share with you three key things about the climate change in Ukraine that you should know:

First. The climate change poses very serious challenges for all of us and we have no time to wait around.

I am confident that most of you observe the climate changing as many Ukrainians do. However, the problem could seem to be insignificant. The thing is that it will be too late to act by the time when we finally realise the consequences of, and get wise to, the problem.

It is impossible to stop the climate change, but our actions and decisions will predetermine the patterns of living of our children and next generations today, tomorrow and during ten years to come.

We are all required to do everything to prevent that scenario from materialising.

Second. To avoid devastating consequences of the global climate change or, speaking the language of international treaties, to achieve the goals of the Paris Agreement, all countries in the world are expected to abandon the use of fossil fuels and achieve the target of 100% renewable energy.

I would like to emphasise: all the countries in the world must switch to 100% renewables by the mid-century.

What does this mean? It means that to address the climate change we need a new vision and strategy for the development of the Ukrainian energy sector. It will be insufficient to prepare an action plan for combating the climate change within the scope of the Ministry of Ecology, while other sectors maintain business as usual. The climate change and the need to reduce emissions must be one of the key criteria for all sectoral and local strategies of the country.

You may wonder whether it is generally possible for Ukraine to achieve 100% renewables and, if so, how much it will cost. Yes, it is possible. Last year, the National Institute for Economics and Forecasting published a report presenting a model showing how to achieve 91% of renewables in the Ukrainian energy mix by 2050. As for its cost, the scenario in question will in aggregate be only 4% more expensive for the country compared to the approved Energy Strategy. However, it is far from certain that this will be achieved with the government’s funds given that the role of the state is to create favourable conditions for both large businesses and small renewable producers with generating plants installed on the roofs of houses, buildings belonging to the associations of multi-family houses, schools, hospitals, and energy cooperatives.

Third. Strong climate policy will create opportunities but not additional expenses for Ukraine.

Climate protection measures that we have already started implementing should be our priority task. It relates to laws and mechanisms that would promote energy efficiency, especially in the housing sector, a gradual transition to renewable energy, investments in the public transport and cycling infrastructure, and the strengthening of the government’s control and regulation of the agricultural sector and waste management.

These are actions that will make living in our country more comfortable with less pollution.

The two-thirds of Ukraine’s generating facilities have been operating since the Soviet times, are critically deteriorated, and should be replaced with new ones. It offers us a unique opportunity to have the entire energy system gradually shifted to new renewable energy technologies.

Today, more than 50 countries in the world, including developed and emergent nations, have announced their plans to achieve the target of 100% renewables by 2050. Hundreds of cities around the world have a similar intention. Twenty countries announced 2030 to be the last year to abandon the use of coal in its entirety.

On 22 June, two weeks ago, Zhytomyr became the first Ukrainian city that presented its plan to achieve 100% renewable energy by 2050.

Ukraine will achieve 100% renewables, but the sooner relevant political decisions are made, the greater will be the benefits.

What can you do as the Members of the Parliament?

When comparing the scenarios, not only the amount of necessary investments should be considered, but also their nature is important. The development of a decentralised RE infrastructure and raising private investments on a large scale will strengthen our economy and create more jobs, while preserving the existing structure of the energy industry will do nothing but harm the economy and increase energy dependence.

Additional information:
During the Parliamentary hearings on Climate Change, 4th July 2018, the representatives of Ecoaction and Ukrainian Climate Network distributed a publication entitled ‘What Parliament Members Should Know about Climate Change and Paris Agreement’ to Parliament’s Members.

To read the publication (available in Ukrainian only) please see below or follow
this link:

Watch video (available in Ukrainian only):