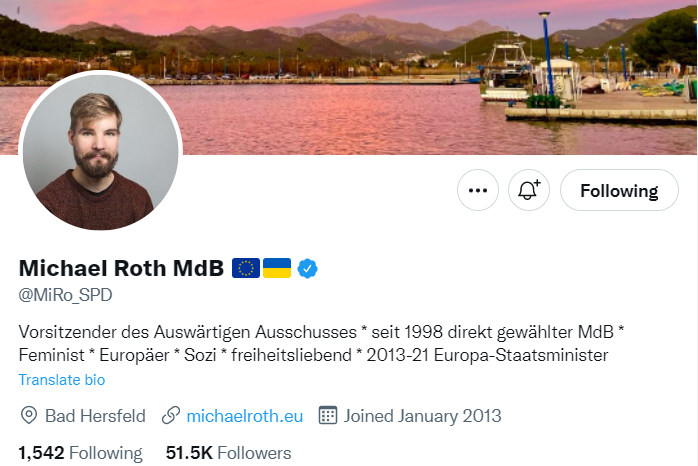 Another German politician that represents the governing party in the parliament agreed on handing his Twitter account to the Head of the Energy Department of the NGO “Ecoaction” Kostiantyn Krynytskyi.

For several days Kostiantyn Krynytskyi will be posting on Michael Roth’s Twitter. This is how a representative of the ruling party SPD (Social Democratic Party of Germany) announced it:

“And now it’s time for my Easter break again. Tomorrow here takes over @KKrynytskyi. He tweets in English and Ukrainian”.

A profile picture of the page has also changed — instead of the portrait of the German Minister of State for Europe in 2013-2021, Chair of the Committee on the Foreign Affairs there is a photo of Kostiantyn Krynytskyi now.

The aim of this takeover of the social media of the well-known German politician (Roth has been a member of the German Bundestag for seven terms in the period since 1998 until now) is to urge German authorities and society to more intense actions regarding direct help to Ukraine, as well as the reorientation of the economy, which is overly dependent on russian fossil fuels.

Earlier, the Head of the Energy Department of the NGO “Ecoaction” had already had access to the account of the German politician and publicist Yannick Haan, Chairman of one of the branches of the German SPD.

Since 2021, Social Democratic Party has become a leading party in the German federal government, which the SPD formed with the Greens and FDP (Free Democratic Party). Germany’s new chancellor Olaf Scholz is also a member of the SPD.