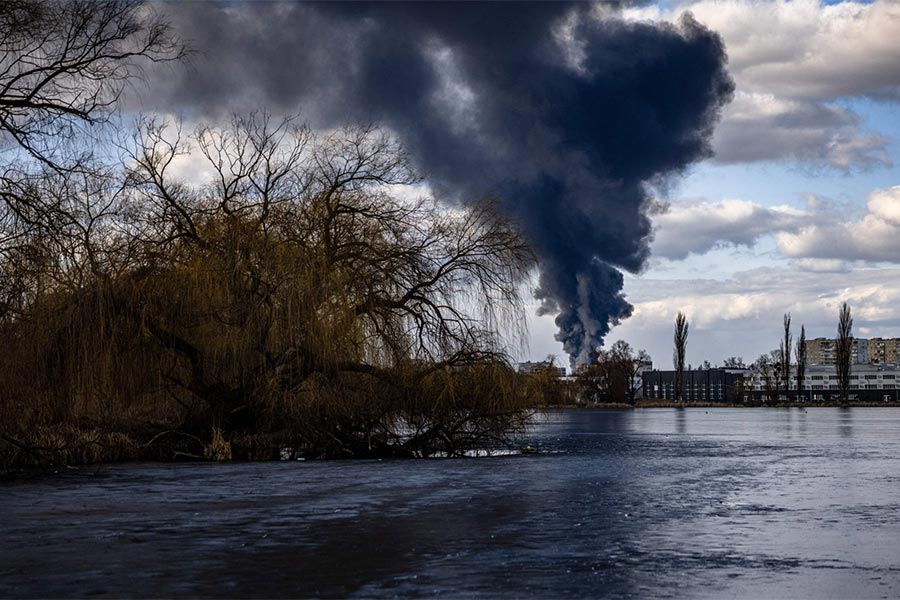 Full-scale russian invasion of Ukraine has been ruining people’s lives and civil infrastructure since February 24. But it also impacts Ukrainian wildlife.

For now, it’s still impossible to evaluate the overall environmental impact of the war because of lack of accurate data. There are two main reasons why. First, it is dangerous for the experts even to gather such information for the warfare is still on. Secondly, not all data can be disclosed for the tactical reasons.

Yet it’s obvious that the longer this war lasts the harder it damages the environment and the tougher its consequences may be in the future. It was seen at the beginning of this war 8 years ago when russia annexed Crimea and parts of Donetsk and Luhansk regions of Ukraine, though in the smaller scale. Warfare, as well as the actions of the occupational administrations, impacted the nature of those regions. And by the way it happened we may try to foresee the consequences of the current full-scale attack.

Impact on landscape and habitats

In the first few days of the full-scale invasion russian troops moved through the existent infrastructure. But for the war lingered russians are changing their tactics and preparing to extended fights. For this reason, they’re forming bases and fortifications. It means they’re moving farther into the wildlands taking up forests and conservation areas. Moving of the heavy machinery, construction of the fortifications and fights damage soils that leads to degradation of vegetation and worsen wind and water erosion.

According to preliminary estimates of the Ministry of Ecology and Natural Resources of Ukraine, as of March 1, russia wages hostilities in 900 objects of nature reserves 12 406,6 sq. km – that makes almost 1/3 of Ukrainian protected areas.

After the fights, parts of the forests in Kyiv, Chernihiv, Sumy, Luhansk, Donetsk and Kherson regions are temporary controlled by russian occupants. For now, it is impossible to evaluate losses for property and forestry. There are now lots of fallen rockets and unexploded ammunition in the forests. It will create potential risk for people for decades as it happened after WW2 – State Emergency Services (SES) sometimes report on accidentally found aerial bombs of that times even now.

Besides, russian troops use forest wood for building of fortifications and infrastructure, heating and cooking.

Spring is a season of higher risk of wildfires and the shellings make it even higher. The snow melts and last year’s grass dries out and becomes more flammable. In the dry conditions fires instantly spread widely. SES cannot provide necessary help and liquidate fires on the territories occupied by russians. Especially favourable conditions for the wildfires spreading are in the monocultural pine forests in the North and East of Ukraine.

Lots of Ukrainian peatland are dried so they’re also extremely flammable. Such wildfires are hard to fight even in peaceful times so further warfare in the North of Ukraine – the region full of dried peatland – would cause tough consequences for the environment and public health. Burning peat cause toxic emissions into the air: CO, CO2, PM2,5, volatile organic compounds containing acrolein or formaldehyde. 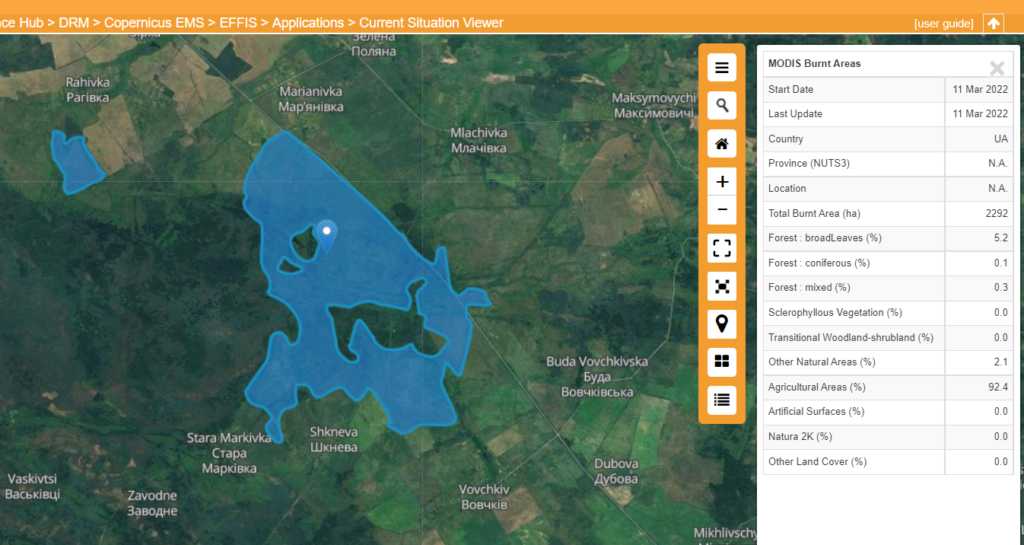 Satellite images show that currently there are small wildfires raging in wildlands, including Chornobyl zone.

The Ministry of Defence of Ukraine reports, that in 20 days russia shot roughly 900 rockets of different types and calibres at Ukraine. Enemy attacks civil and military infrastructure, including airports, ammunition warehouses in Krasnopillya, Kryvyi Rih, Dnipro and Zhytomyr cities, airfields and their fuel storages in Hostomel, Chuhuyiv, Chornobayivka, Melitopol, Ivano-Frankivsk and Mykolayiv cities, as well as naval objects. But most of the shellings target settlements and their industrial objects. Explosions of rockets and artillery create a bunch of chemical compounds: carbon monoxide and dioxide, water vapour, nitric oxide (NO), nitrogen oxide (NO2), nitrous oxide (N2O), formaldehyde, hydrogen cyanide vapour (HCN), nitrogen (N2) and loads of toxic organic. They also cause acidification of soil, wood, sod and metal constructions such as bridges.

After the explosion, those compounds are being fully oxidated and the products of the reaction release into the atmosphere. The main ones – carbon dioxide and water vapour – are not toxic and are dangerous only for climate change for both of them are greenhouse gases. On the other hand, sulfur and nitrogen oxides may cause acidic rains changing the pH of soils, causing vegetation burns, especially for conifers. Acidic rains are also dangerous for humans, other mammals and birds, impacting mucosae and respiratory organs.

Metal fragments of shells are also not completely safe for the environment. Cast iron mixed with steel is the most common material for ammunition cases and contains not just the usual iron and carbon, but also sulfur and copper. Those substances get into the soil and may drift into the underground waters, eventually penetrating food chains impacting humans and animals.

On a smaller scale, pollution may also be caused by burning tanks, transport, airplanes and other warfare remnants.

Russian troops attack port infrastructure alongside the Black and Azov seas shores, as well as the anchored ships, causing water pollution and spreading of poisonous substances into the sea. Oil products harm marine biocenosis forming pellicles on the water surface and breaking energy, heat, humidity and gas exchange between sea and atmosphere. Moreover, they impact directly the physical chemistry and hydrologic conditions killing fish, marine birds and microorganisms. All the components of the oil are toxic to marine life. Oil also has other harmful qualities. Its hydrocarbons can dissolve other polluters such as pesticides or heavy metals, which alongside oil concentrate in the upper layer and poison it even more.

Soil pollution with fuels and oil materials and other petroleum products is due to the movement and damage of land military machinery. In this case, soil water permeability is reduced, oxygen is displaced, biochemical and microbiological processes are disrupted. As a result, water, air and nutrient cycles deteriorate, root nutrition is disrupted, and their growth and development are inhibited, leading to death.

Consequences of the fires on the industrial objects

Shellings of the industrial and infrastructural objects lead to fires that cause additional air, soil and water pollution. Products of burning that penetrate the environment consist of toxic gases and particulate matter. Water and soil on those objects also risk being polluted. After the fires are liquidated the environment may also be polluted with the remnants of the firefighting foam.

Risks related to the damaged communications, enterprises and other environmentally dangerous objects in uncontrolled conditions and without the ability to liquidate harmful impacts may worsen the consequences.

On February 27, russian troops hit the oil base in Kyiv region with a ballistic rocket causing the fire. On the premises near the Kryachky village 10 tanks with 2000 m3 of oil and diesel outflamed. Similar cases happened in Okhtyrka, Luhansk, Chernihiv, Zhytomyr and Chernyakhiv. 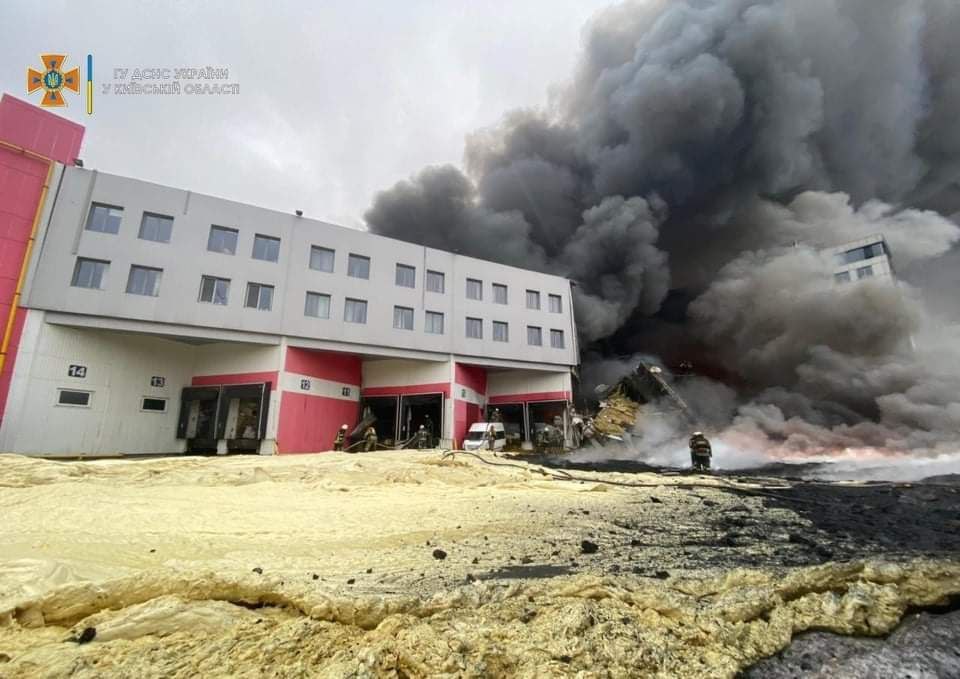 On March 3, in the Chaiky village near Kyiv missile hit the foam rubber storage causing a fire there and in the nearby office building. Products of rubber foam burning cause poisoning of both humans and animals and may also lead to acidic rains. Such rains may harm the vegetation leading to biomass loss in crops and weakening of wild plants and forests. Pests may destroy such forests faster and the growing amount of dead wood may in turn help forest fires spread wider.

Wastewater in the Dnipro River

Damaged municipal communications may lead to organic pollution of water. On March 14, russia shelled sewage treatment plants in Zaporizhzhya region destroying the pump station that distribute wastewater of Vasylivka city to the facilities so those waters are now flowing directly into the Dnipro River without any filtering. They consist of lots of organic substances, helminth eggs, pathogenic bacteria, sulphates and chlorides. It may cause a large-scale algal bloom in the Dnipro River and the Black Sea when the warmer weather comes.

Biodiversity losses and danger to the threatened species

Warfare disturbed wildlife so animals either die or try to escape. If the war doesn’t stop by the end of the spring it may endanger mating for lots of birds and mammals. Most of the birds need peace in this period to produce offspring. Mooses – the rare specimen from the Red List of Ukraine – produce their offspring during April-June. Warfare puts at risk this process and the survival of the calves.

Three main bird flyways lay through the territory of Ukraine: Azov-Black Sea latitudinal (southern pathway) with the highest concentration of migrating birds in Ukraine; Polissia latitudinal along the forests of Polissia and in the North of forest-steppe; and Dnipro meridional migration route which lays along the stream bed of the Dnipro River and its tributary Desna. This route is widely used by waterfowl and shorebirds – geese, ducks, loons, waders, gulls, terns, etc.

Large flocks of geese, ducks, swans, gulls, terns stay at the water; cranes, waders, etc – at swamps and meadows; lots of species of songbirds – chaffinches, thrushes, buntings, starlings, robins, warblers, flycatchers – on trees and bushes. Those places are extremely important for migrating birds to feed and rest so they need to be preserved.

Most of the flyways are now located over the warfare zones. It may be disturbing for the birds and cause exhaustion because of changing routes or losing places to rest, as well as direct deaths from shootings and shellings.

What happens after the war is over?

After the war, we will face the consequences of the attacks: destroyed ecosystems, polluted soils, biodiversity losses, and higher amounts of pests in the forests. Moreover, the country will need lots of natural resources to be rebuilt. There is also a risk that Ukraine will fail to reach our declared climate goals for the war is an additional contribution to climate change and the rebuilding will be inevitably related to greenhouse gas emissions.

Since the major chemical pollution of soils and waters is expected, it is crucial to create effective environmental monitoring. It would help to evaluate the overall environmental damage and take necessary measures to avoid further aggravation and recover ecosystems for people and for the wildlife.

Now the Ministry of Ecology of Ukraine, civil society and environmental committee of the Parliament should document all the environmental damage caused by the russian invasion to make the aggressor pay for it.

It is also important to include ecosystem recovery and protection into the Ukrainian recovery plan and rebuild our settlements focusing on nature-based solutions and adaption to climate change.