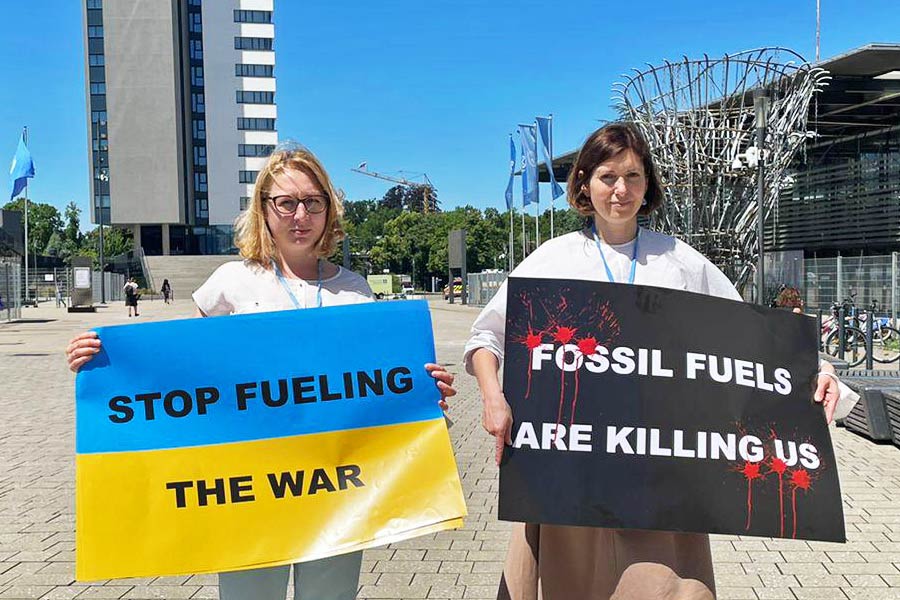 The 56th session of the Subsidiary Body of the United Nations Framework Convention on Climate Change is taking place from 6 to 16 June in Bonn, Germany. The purpose of the meeting is to bring together stakeholders from around the world to prepare for the UN Climate Change Conference 2022 (COP27) in November this year.

Russia’s actions jeopardized global climate efforts, including Ukraine’s. That is why during the meeting of the Subsidiary Body, activists held an action of solidarity and demanded to stop funding war through fossil fuels and accelerate the implementation of climate goals to prevent future wars and conflicts.

Ukraine`s made a lot of efforts to increase climate ambition at the legislative level and achieve Paris Agreement Goals during the last years. We still had a lot to do, but the first steps had been taken. In July 2021, the government approved an updated NDC target for an actual reduction. Ukraine committed itself to a 7% emission reduction by 2030 compared to 2019. The first Strategy on Environmental Security and Adaptation to Climate Change was approved. Ukraine has pledged to achieve carbon neutrality in 2060. In recent years, the number of renewable energy sources has increased significantly. The share of renewables in the total balance of electricity production exceeded 13% in 2021.

But on 24 February 2022, Russia openly attacked Ukraine after the war on Donbas and the occupation of Crimea since 2014. In 113 days of the full invasion, tens of thousands of people were killed, thousands of settlements were ruined, 20% of Ukrainian territory was occupied, more than 200 industrial facilities were bombed, about 40% of all renewable energy facilities were occupied or destroyed. The war directly hit the agricultural sector in Ukraine, and damaged wetlands, forests, and marine ecosystems, causing irreversible consequences not only for Ukrainian nature but threatening the whole world. War and climate change, hand in hand, have hit the most vulnerable segments of the population the hardest, which could have resulted in additional casualties from the war. 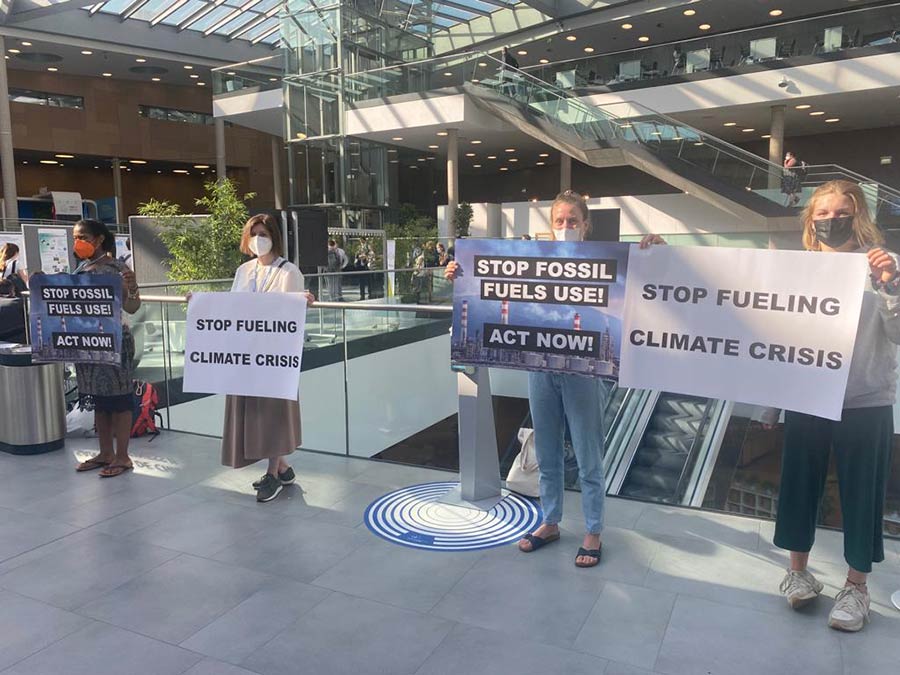 Climate change and the war against Ukraine have a direct link and have the same roots. It is fossil fuels and sick dependence on them. 40% of Russia’s federal budget comes from export of fossils, which also make up 60% of Russia’s exports. Russia’s invasion not only hurt Ukraine, but also jeopardized the implementation of global climate goals and the world’s ability to adapt to climate change. Instead of an accelerated transition to renewable sources and the development of energy efficiency, countries are looking to replace Russian fossil sources with sources from other countries. An increase in oil, gas, and coal production is planned.

Increasing the world’s climate ambitions and accelerating the abandonment of fossil fuels could stop the war in Ukraine and prevent future resource-based conflicts. It is essential to ban all fossil fuel resources from Russia to prevent more losses.

For all its horrors, Ukraine continues to support the vision of the EU Green Deal and is considering green and sustainable recovery. So please, be brave like Ukraine and stop dependence on fossil fuels. World needs a clean energy transition, and rapidly accelerated investments in the development of energy efficiency and energy savings to increase energy security and speed up climate action for every country. To ensure adequate climate action in fragile and war-affected countries and that climate adaptation is supported at the local level, transparent and flexible mechanisms of access to climate finance should also be developed and supported.