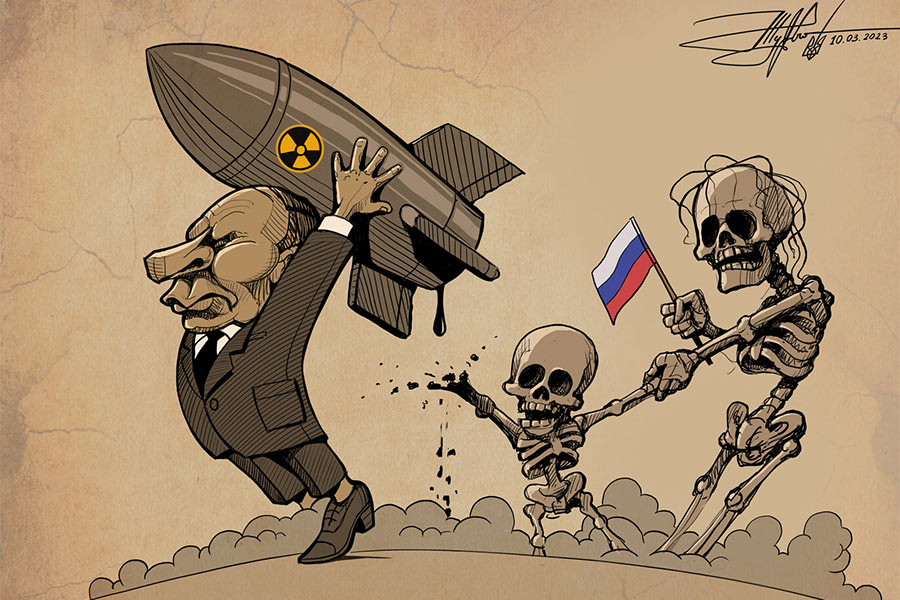 As of March 11, both Chornobyl and Zaporizhzhia nuclear power plants remain under the control of Russia. With its terrorist actions, Russia violated all seven IAEA pillars of atomic safety. Russian troops hold staff captive, cut off electricity, and shell the containments, thus imposing the threat of radiation leak.

Ukrainian nuclear NGOs demand international recognition of Russian military actions as the first ever case of nuclear terrorism. During the media briefing, five experts explained why the huge risk persists and urged authorities to act.

For sixteen days, the aggressor’s army has kept exploiting the Chornobyl nuclear power plant (NPP) as its temporary base on Ukrainian territory. Although three existing reactors are not operating, the facility remains a huge complex with three spent fuel storages and various sites with radioactive waste.

The Russian army keeps NPP’s staff as hostages to date, as reported by Valerii Korshunov, a founder of NGO European Institute of Chornobyl. Their detention conditions are rough and are comparable to such in slavery. This results in staff malnutrition, no proper shift rotation, emerging health issues, no heating, and no fresh clothing, which is paramount for workers on radioactive sites.

“We were approached by relatives of the station workers, who since then — 16 days at the station, without replacement, have been working without proper sleep, food, and medical care at gunpoint of the Russian military. Most of them do not believe that they will be able to return from the station alive. I urge representatives of IAEA and EU to visit the site and see what’s happening with their own eyes” — says Valerii Korshunov, a founder of NGO European Institute of Chornobyl

The International Atomic Energy Agency (IAEA) and the American Nuclear Society agreed on the following: the current state of the NPP does not pose any threat to the public. Unfortunately, both of them seem to be downplaying the risks. Closer inspection of the surroundings showed the increased radiation level near the facility. Russian officials, however, conceal this information and attempt to misinform the international community.

“Russia lied about big things, small things, and about every single step of that information. The situation is not under the control of Ukraine and the IAEA. We demand the liberation of the Ukrainian NPPs from the Russian troops and the recognition of their actions as nuclear terrorism.” — Korshunov added.

From the technical side, spent nuclear fuel storage 1 (CSFSF-1) houses over 20,000 fuel assemblies of RBMK nuclear reactors. To disperse heat from the fuel assemblies, cooling is necessary, which is ensured via uninterrupted water pumping. Now cooling is at stake since the Russian military de-electrified the plant on March 9, and emergency diesel generators can last only 48 hours. It becomes nearly impossible to create a safe environment for equipment under such circumstances.

“If the work of all control and safety systems is not ensured at the Chornobyl NPP, the current personnel, among whom there are liquidators, will have to physically examine the nuclear facilities, thus getting exposed to unknown amounts of radiation. As survivors of the Chornobyl explosion, we know it first hand: depending on the level of exposure, it is either a quick ugly death or a very slow ugly death. Please no more nuclear disasters!”, – plea devastated relatives and family members of the personnel held hostage at the Chornobyl NPP.

“The absence of ventilation results in accumulation of radioactive hydrogen. If it reaches a concentration of 4%, a hydrogen explosion may occur. The second moment: if the pool is shut down and the water goes away, there will be a chain reaction that will lead to the melting of the cover destroying a physical barrier between radioactive particles and the environment.” — says Olga Kosharna — an expert in nuclear energy, previously worked at the State Nuclear Regulatory Authority of Ukraine.

As for Zaporizhzhia NPP, we observe the unprecedented fact of nuclear terrorism, the first ever case in history. Nuclear containment shelling is an untold atrocity since none of the NPPs were designed for war emergency. Considering that six reactors have been active over the years, and 2 out of 6 currently operating, Zaporizhzhia raises even more significant concerns than Chornobyl.

According to nuclear operator EnergoAtom, the Russian military has managed to mine the border side of the NPP. As a result, explosives were brought directly next to the site, making it impossible for Ukrainians to retake the facility due to nuclear safety. Moreover, it complicates further operations for the NPP staff.

“There is no oversight from the nuclear regulators. They cannot monitor what’s happening directly. We also do see the Russian army movement toward Southern Ukraine NPP with the possibility of a similar scenario upcoming if they break through. The nightmare, however, is a prospective battle near Rivne NPP, where two of four reactors are of the older design with no containment and are far more vulnerable,” — says Jan Haverkamp, senior expert on nuclear energy and energy policy, Greenpeace.

Most notably, Russian military actions are endangering not only Ukraine, but also Europe and their own territories. As of March 4, the model of potential radioactive material spread based on the current conditions indicated that Russia and Belarus would be the first to suffer from the emission.

“Shelling resulting in severe fires at Zaporizhzhia NPP would affect not only the nearby area but surrounding countries. From history, the Chornobyl accident led to contamination spread to many countries and regions. For example, there was 200 times higher radioactive activity in my hometown in Sweden than in Chornobyl, even though it’s located 1,400 km away,”— says Lembit Sihver, a founder and CTO of the Cosmic Shielding Corporation in the USA.

The physical integrity of the facilities has been impaired, equipment is not normally functioning, and the operational staff is reportedly physically and psychologically exhausted. Next, there is no stable power supply, disrupted logistics in the occupied area, and lack of communication with regulators. Effective off-site and on-site radiation monitoring is absent entirely.

This blatant assault on the Ukrainian energy infrastructure gives Ukraine the grounds to submit the case to the international court. According to the experts, both the UN and IAEA do not dispose of powerful leverage to influence the situation. Instead, the appeal to the governments of the nuclear states may be helpful.

“We should remember that IAEA was created to promote the nuclear industry, and talking of risks is a tricky position for them to be in. So we rather have hope on the governments of the states that operate nuclear and expect major states like China and India, Brasilia, South Africa to join European states to communicate with Moscow.” — says Olexi Pasyuk, environmental expert, NGO Ecoaction.

All five experts unanimously agreed on the need to exclude Russia from all nuclear unions and sue the country for the previously unseen act of nuclear terrorism. They urge the authorities to put more pressure on Russia to withdraw their troops from Ukraine without regard to blackmail and deception coming from the country’s officials.

Around 3pm February 24th Russian troops captured Chornobyl NPP, eyewitnesses say they saw soldiers in Belarusian uniforms as well. Military forces took the NPP’s staff, whose shift began at 9pm February 23rd, as hostages. On March 9, the facility was cut off from the crucial 750 kV power supply. On March 3, 2022, artillery strikes by Russian forces damaged some buildings at Zaporizhzhya NPP, the largest NPP of Europe, and scattered mines around the site. On March 10, Russia bombed Nuclear Research Lab in Kharkiv containing a reactor. Ukraine repeatedly asked the UN and NATO to close the sky above Ukrainian nuclear sites but to no avail. As of March 11, there is still no electricity at the Chornobyl NPP.