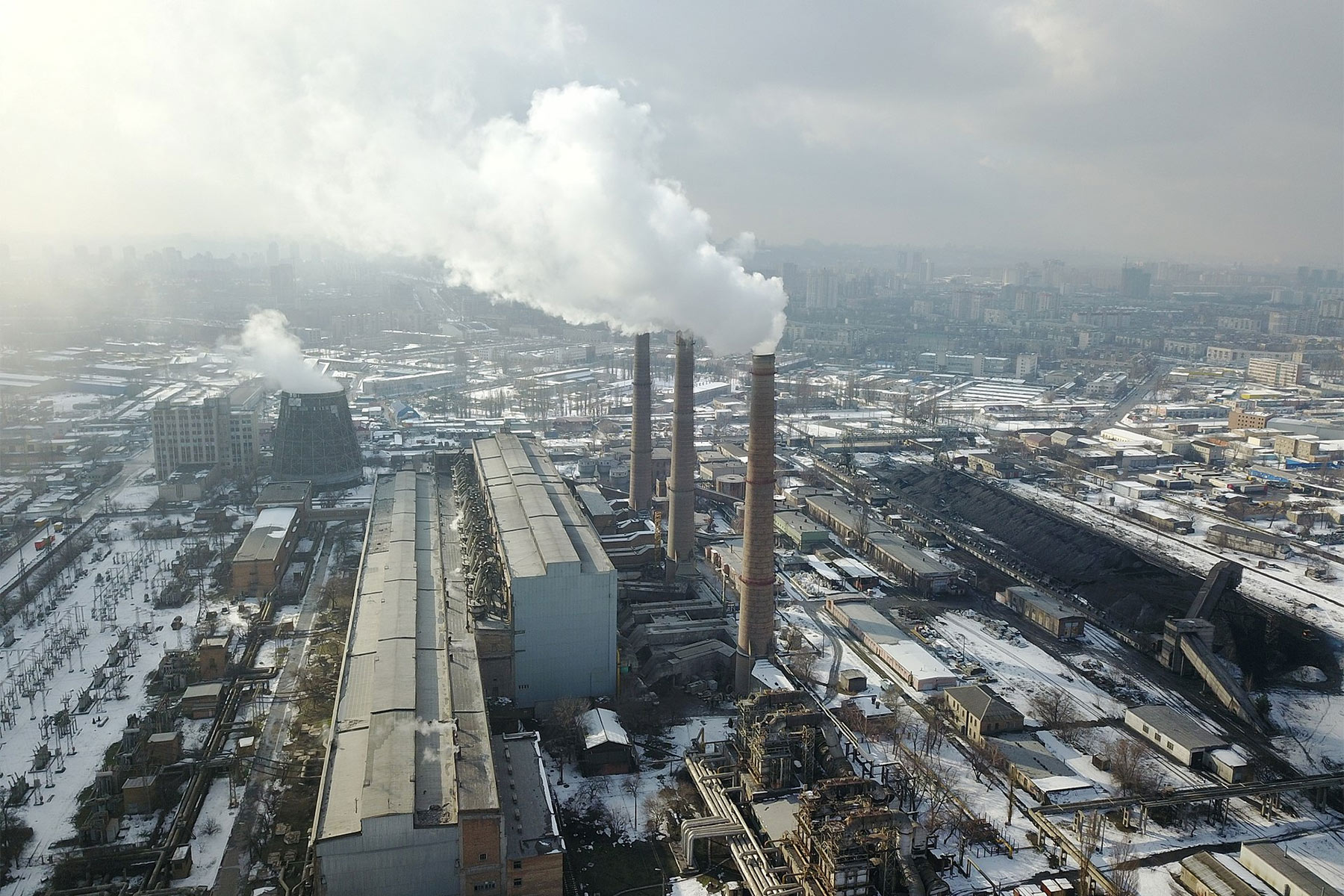 This is reported based on aggregated emissions data in a new study of the independent climate and energy policy think tank EMBER.

According to the study, Ukraine produces 72% of all emissions of fly ash, 27% of sulfur dioxide, and 16% of nitrogen oxides in all of Europe combined with Turkey.

In terms of sulfur dioxide emissions, Burshtynska TPP ranks 1st on the continent (Figure 1). It is also the oldest thermal power plant among dozens of top pollutants – it was commissioned in 1964. Among the 30 largest sources of emissions of this toxic substance are 12 Ukrainian power stations. 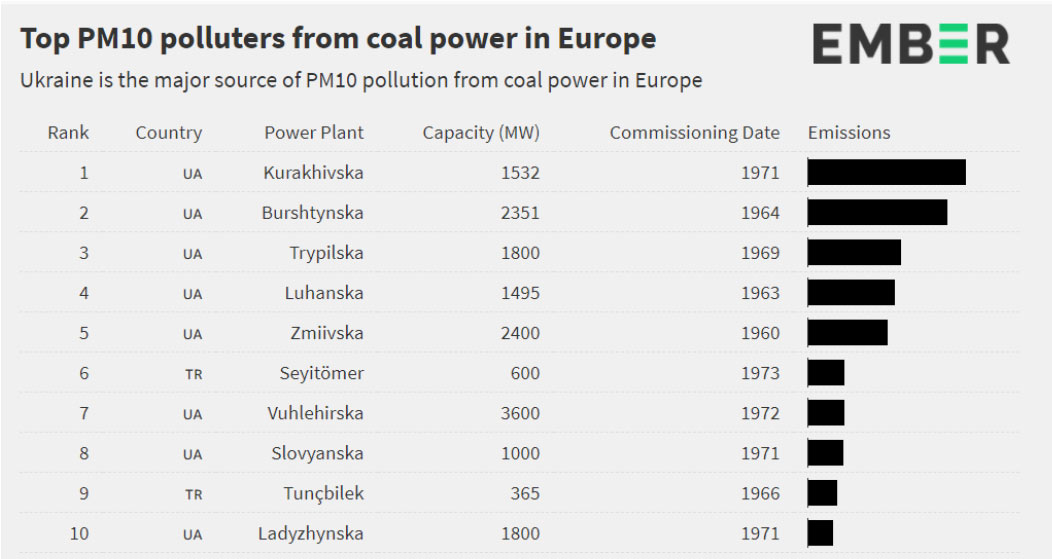 In the anti-rating “Top 10 power plants with the highest dust emissions” Ukraine has 8 power plants. These include Kurakhivska, Burshtynska, Trypilska, Luhanska, Zmiivska, Vuhlehirska, Slovyanska and Ladyzhynska TPPs. All of them were put into operation in the 50-70s of the last century. The top 30 for these emissions include 18 Ukrainian TPPs. 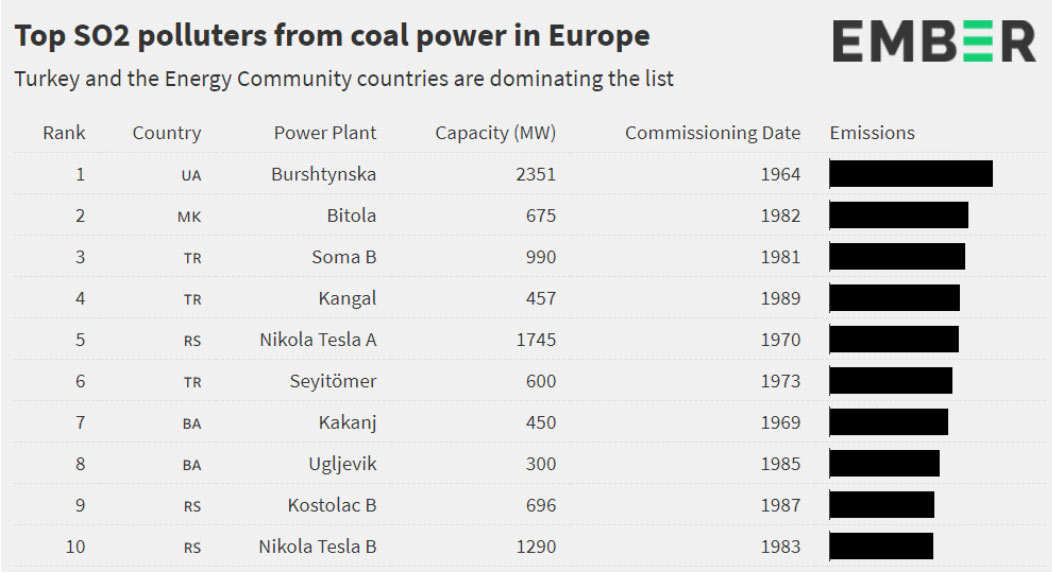 In terms of nitrogen oxide emissions, Zaporizhzhya TPP ranks 2nd among the largest polluters. Other Ukrainian thermal power plants are second only to the largest power plants in Europe (located in Germany, Poland, and Serbia). However,  in the NOx ranking of the top 30 polluters in Ukraine belongs 9. 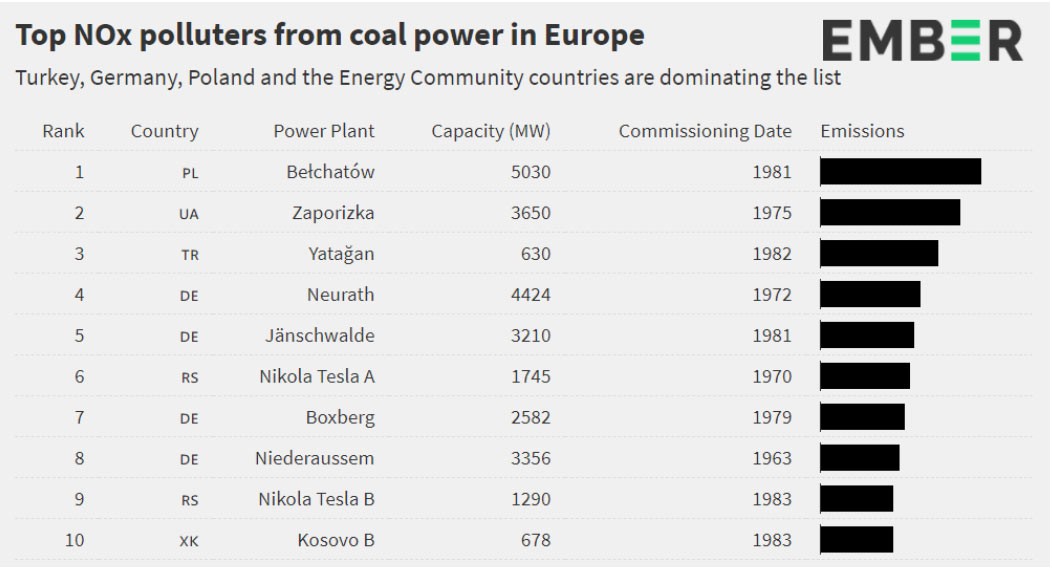 The authors of the study note that since Ukraine joined the Energy Community Treaty 10 years ago, none of Ukraine’s TPPs has been brought inline with the requirements of the EUDirectives on large combustion plants and industrial emissions.

According to the estimates of the Secretariat of the Energy Community, the volume of state subsidies for the coal industry in Ukraine is the largest in the entire region and in 2018-2019 amounted to 751 million euros.

“Being Europe’s biggest polluter is a questionable achievement. The use of coal is an economic burden for the state and poses enormous risks to the health and lives of our citizens. Ukraine must abandon the use of coal in the energy sector and close old, dirty, unreliable, and dangerous coal capacities. At the same time, this should be done in a just transition way for the residents of those towns that are currently economically dependent on coal mining and thermal power generation. The creation of new clean power capacities and retraining of employees should become the basis for a just transition of the respective regions”, – comments Kostiantyn Krynytskyi, head of the energy department of the NGO Ecoaction.