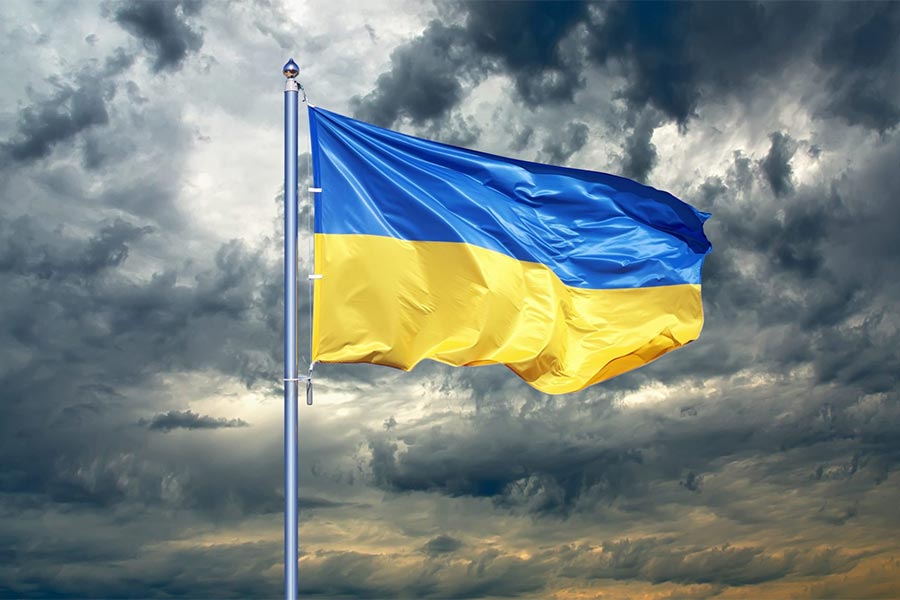 For the past month we have seen our homeland transformed into the frontlines for an atrocious imperialistic war fuelled by Russian oil, gas and coal.

Russia’s war on Ukraine coupled with the rebound in demand for oil and gas is leading to higher food and energy prices and economic shockwaves throughout the globe. We know that this war has been bankrolled by the coal, oil and gas industries, which account for 40% of Russia’s federal budget and 60% of Russia’s exports. This is why we, members of Ukrainian Climate Network, are endorsing the Fossil Fuel Non-Proliferation Treaty as a way forward for Ukraine and the world.

As Russia’s war in Ukraine enters its second month, it is deafeningly clear: fossil fuels are a weapon of mass destruction, one for both this war and the ongoing climate crisis. As we stand resolute to boldly resist Russia’s incessant attacks on our country, we call on world leaders to stand in solidarity by making a bold commitment to end the world’s addiction to fossil fuels with a Fossil Fuel Non-Proliferation Treaty.

Fossil fuelled wars are not new. The industry inspires conflict wherever it goes, whether it’s Ukraine today or the decades of violence perpetuated in places like the Middle East, Nigeria and Ecuador in the Global South, which already suffer from severe weather, poverty and oppression.

Climate change, same as nuclear weapons, is a major global threat. This is not the time to simply displace Russian coal, oil and gas with those from other countries and definitely not the time to increase production of fossil fuels. This is a moment to create a path to global security through energy and climate security. By stopping the expansion of oil, gas and coal, phasing out fossil fuels and jumpstarting a just transition powered by viable and accessible renewable energy, we create a better future for all.

Scientists have already issued their “bleakest warning yet” on the climate crisis and people’s fundamental rights must be at the core of solutions to the climate emergency. The latest report from the IPCC makes clear that there are a number of institutional barriers that prevent climate solutions from happening at scale. This is why we need a Fossil Fuel Non-Proliferation Treaty to serve as an anchor for international cooperation and lay out a binding global plan to:

These three pillars of the Fossil Fuel Non-Proliferation Treaty also provide us with hope and a vision for socially responsible, equitable and green post-war recovery of Ukraine. As we enter the second month of fighting, we see how much destruction has already been done to Ukraine by this fossil-fuelled war. We would need to rebuild all that has been damaged, but we don’t want to do it the old way. Post-war reconstruction of Ukraine should follow the path of green and secure recovery, with all financial resources applied to eliminate dependence on fossil fuels, boost energy efficiency, deliver accelerated energy transition and create a decarbonized economy of XXI century.

Fossil fuels are weapons of mass destruction, threatening our ability to protect livelihoods, security and the planet. Fossil fuels are dreadfully destroying our country being the main source of putin’s profit that enabled this war of unprecedented crimes, violence, misery, murders of civilians, children, millions of refugees and humanitarian catastrophe. We are calling on governments who have all necessary means to phase out fossil fuels to stop putin’s war machine immediately, endorse and implement the Fossil Fuel Non-Proliferation Treaty.

Ukraine is on fire because of war and the world is on fire because of the climate emergency. Both are fueled by coal, oil and gas. We are calling on Europe and the world to put an end to additional fossil fuel reserves exploration, cancellation of any new oil, gas and coal infrastructure projects. We call for war time mobilization aimed at massive investments in energy efficiency and renewables. Peace and climate justice go hand in hand: world leaders should fulfill their pledges under the Paris Agreement goals and enforce them with the Fossil Fuel Non-Proliferation Treaty.

It is heartbreaking for me, as a climate activist, to be living through a war which has fossil fuels money at its core. The money, that we begged not to invest in dirty energy, is now flying over our heads in the form of bombs. The blackmail that is coming from the aggressor right now is working due to Europe’s dependence on fossil fuels. We need to come out of this war better than we were. We need to learn how to act in a more intelligent way and put the great power of Ukrainian people into green recovery. This is why I want Ukraine to become a part of the Fossil Fuel Non Proliferation Treaty.

Every drop of oil bought from russia – is another drop of Ukrainian blood spilled all over the country, as every piece of russian coal – another bullet fired into Ukrainian civilians. This needs to stop.The world, collectively, needs to ban russian fossil fuels but this mustn’t (and cannot!) mean a lock-in for gas, oil and coal from other countries. International fossil addiction needs to be kicked once and for all. We must make it impossible for dictatorial regimes propped up by the export of fossils to break international laws and wage wars in the future.

This is a break moment for the world to change a path entirely. I worked for years trying to convince the government that fossil fuels will bring us only destruction. And now world dependence on russian fossil fuels destroys my country. Only in a month thousands of people were killed, cities razed to the ground. We can not live years in war until countries would find a comfortable solution to stop fossil fuel supplies from russia. Action needs to be done now. The solution has long been known – a just transition to 100% renewable energy with universal access. This is the time to make a strong-willed decision to protect people and the future of all countries from the climate crisis. We can stop terrorism based on fossil fuels.