Adults and youth, left-wing and right-wing, citizens of more than 20 Ukrainian cities, community activists, celebrities, students, employees of various spheres, and even politicians – more than 2 thousands people came together in Kyiv for one purpose: to demand from the authority real action to fight climate change. 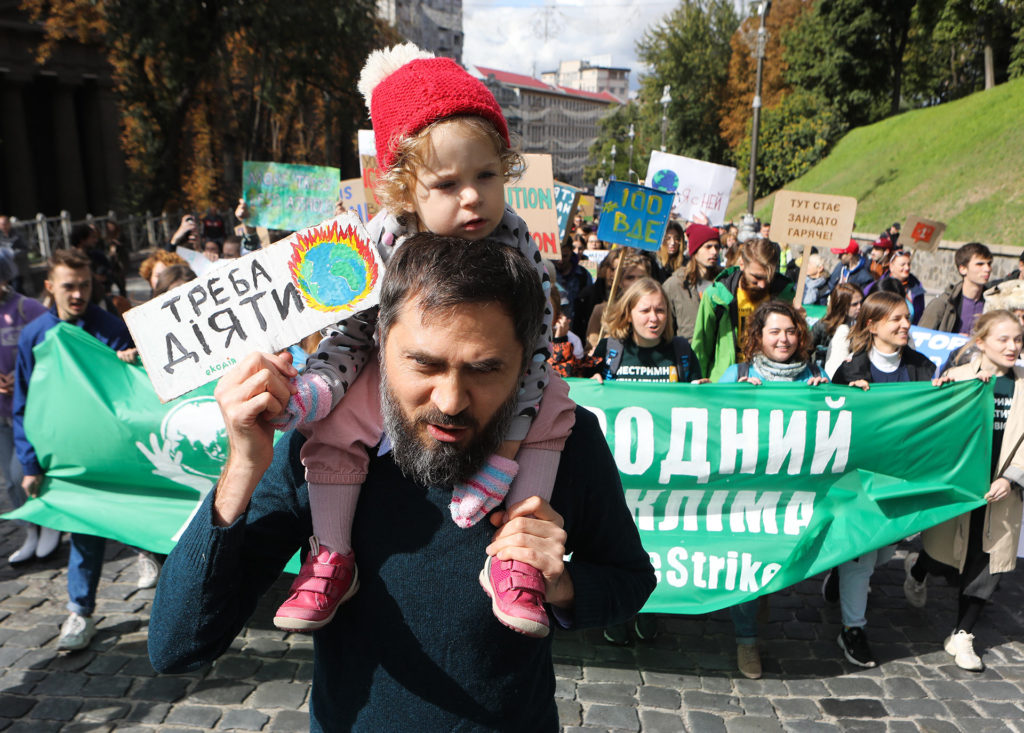 By the Cabinet of Ministers of Ukraine, activists had met with Minister of Energy and Environmental Protection Olexiy Orzhel. He admitted that climate policy is one of the new Ministry`s priorities and emphasized that he supports Ukraine`s transition to renewable energy and net-zero emissions by 2050 or even faster.

The March had ended near the Office of the President, where activists declaimed the speeches to the new Ukrainian authorities. An open letter with 6 demands on climate was publicly signed by the heads of organizations, which initiated this March, and was passed to the representative of the Office Sergiy Melnyk. Following the symbolic letter activists will also send an official appeal with the same demands. 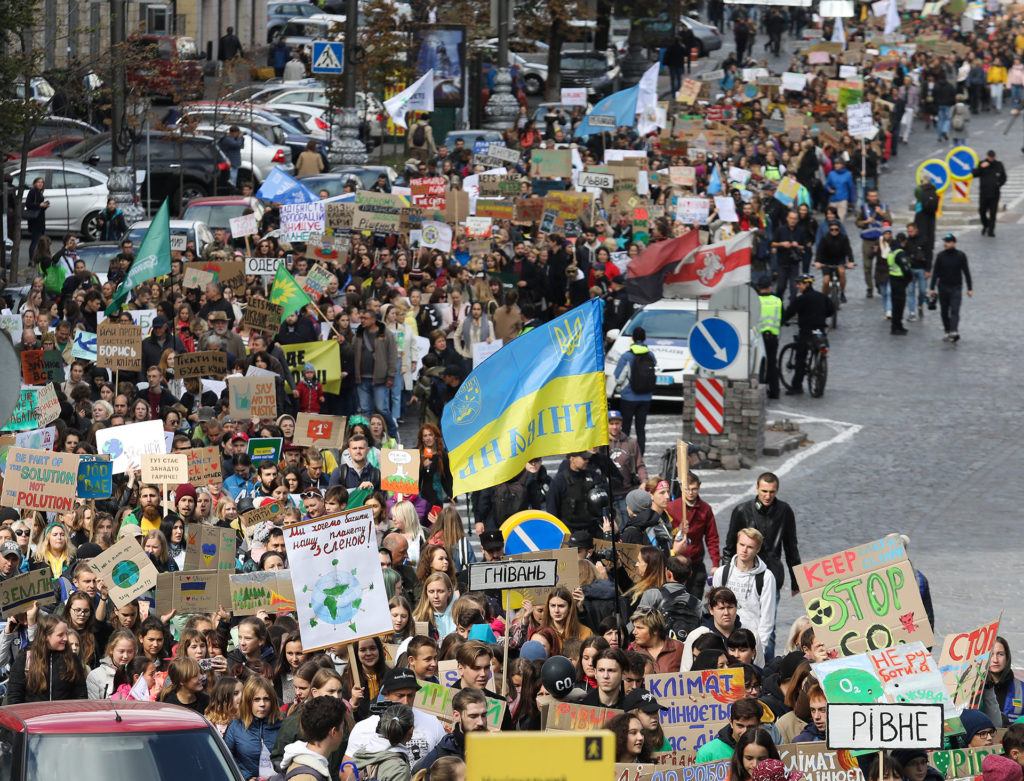 It was the largest climate action in the history of Ukraine. It has also become the largest in the world since similar events took place in over 150 countries and brought together millions of people. The UN Climate Change Summit takes place in New York on September, 21-23, where countries will discuss their contribution to the common fight against the climate crisis. People from all corners of the globe have come forward to show that they want changes, they are determined and they require the same determination from the authority.

So, what do all these people want?

The global movement calls for politicians to acknowledge the climate crisis and to change their policies, in line with the recommendations of scientists from the Intergovernmental Panel on Climate Change (ІРСС). These are thousands of scientists from 195 countries who have been collecting, analyzing and providing objective climate data for 31 years. Their reports have the pessimistic forecasts and the steps required to avoid the climate crisis. Ukrainian activists have put forward six key demands that will help to contribute and reduce gas emissions in our country.

“The use of green electricity and heat instead of burning fossil fuels is necessary to solve the climate challenges, as energy is one of the largest sources of greenhouse gas emissions in Ukraine. The transition from a centralized system to an increasing number of small-scale renewable energy plants provides additional benefits for Ukrainians and the energy system as a whole: own source provides energy independence, community and local development, reduced transportation costs, and sustainability,” says Tetiana Astakhova, Renewable Energy Campaigner, Ecodiya.

“The coal era is coming to an end. Leading countries in the world set clear dates for the abandonment of coal in the energy sector. This is due to both economic and environmental factors. Ukraine should not be an exception. 6 of the 10 largest air pollutants in our country are coal-fired power plants. These emissions have a negative impact on human health, dramatically reducing life expectancy and are the cause of climate change,” comments Kostiantyn Krynytskyi, Just Transition Campaign Coordinator, Ecodiya.

“Livestock is responsible for at least 1/5 of all greenhouse gases that cause climate change. Forests are being cut down for new pastures at an unprecedented rate: livestock has already occupied 2/3 of the land suitable for agriculture and continues to expand. We urge the authorities to immediately review priorities and stop subsidizing the climate-damaging industry and providing savings into plant development and other projects that will bring humanity closer to disaster relief, and not vice versa”, urges Pavlo Vyshebaba, Chairman of the NGO Yedyna Planeta, Ambassador of the United Nations Development Program in Ukraine.

“Cycling doesn’t emit harmful substances into the air. This is critically important to reduce air pollution and prevent global warming. In particular, in Kyiv, pollution from cars is 84%. People are suffocating, so it is necessary to develop public electric transport and bicycle infrastructure in cities,” says Maria Shenenko, Volunteer Coordinator of the NGO U-cycle – Kyiv Cyclists Association.

“The community is concerned about the impact of plastic on the ocean, ecosystems and human health, but little is known about the plastic industry’s impact on the climate. If plastic production and use are to increase as projected by 2030, emissions can reach 1.34 gigatons per year, equivalent to more than 295 coal-fired power plants. The rapid global growth of the plastics industry is undermining efforts to reduce carbon pollution and prevent climate catastrophe,” says  Anastasia Martynenko, Chairman of OZERO and Zero Waste Alliance Ukraine.

The effects of climate change can be felt right now: severe weather changes, abnormal heat, more frequent droughts, floods, hurricanes, lost crops, water scarcity, rising sea levels and, as a consequence, flooding. And if the temperature continues to rise, it will only get worse. With the current rate of climate change, by the middle of the century, 250 million people are at risk of becoming climate refugees due to rising sea levels or lack of drinking water.

Due to climate change, 590 settlements, 52 thousand buildings, 660 environmentally hazardous sites, 200 thousand hectares of agricultural land by the end of the century may completely or partially be flooded in Ukraine. 75 thousand residents of these territories will be forced to seek a new home.

The reason for all these changes is greenhouse gas emissions, which contribute to faster heating of the planet. Only in the last 150 years (a period of rapid industrial development), their concentration has increased from 280 ppm (ppm) to more than 400 ppm. This rapid increase in atmospheric CO2 occurred on the planet for the first time in human history.

Overcoming the climate crisis requires dramatic reductions in greenhouse gas emissions and, therefore, major systemic changes in the areas that cause them the most: energy and transportation, livestock farming, waste management. That is why, at first glance, multidisciplinary organizations have united for one purpose: to save life on the planet.

Ukrainians, together with the whole world, have confirmed that climate change is a challenge that worries everyone and needs immediate action to overcome it. Experts have helped to find solutions. The next step is for authority. Authority needs to hear us and start implementing policies that will lead to a harsh but necessary reduction in greenhouse gas emissions.

We are ready to help. 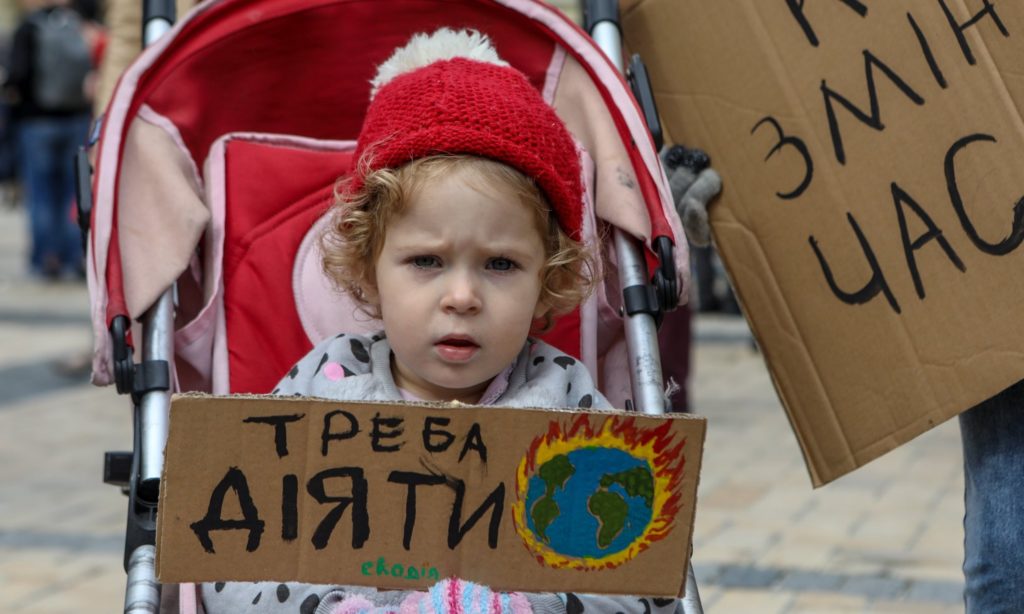 “Climate change is an eternal conflict of natural human rights and a social contract with capitalism and consumption, which has come into acute phase due to the depletion of natural resources, their scarcity and rise in price, the overpopulation of the planet, the prolonged intensive burning of oil, gas and coal, and crazy growth in energy dependency.

Climate change will be devastating for the least protected: environmental objects that are tearing into resources, people living in climate-deprived territories and people living in extreme poverty. Millions took to the streets today to make politicians aware of the climate threat and to choose a new green future, not apocalyptic regression at nuclear power plants, fires of unique forests, coal mines, dirty transport, and dirty industry,” reports Svitlana Romanko, Executive Director of 350.org in the Eastern Europe, Caucasus and Central Asia (EECCA).

“At present, climate change is not a priority issue for Ukraine. But every year, in different parts of the country, we can see changes in our usual environment, such as the drying and flowering of reservoirs, sharp changes in weather conditions, heavy rains and droughts, heatwaves. Climate change is one of the factors behind such phenomena. That is why people around the world go on climate strikes for changing the priorities of the countries’ policies,” explains Yevgeniya Zasyadko, Climate Change Specialist, Ecodiya.

“Climate change is a challenge for all of humanity, which is why we need to act decisively. On September 20, major climate action will be held around the world, where young people and adults alike will demand a clean and safe environment for themselves and future generations. We will appeal to the authorities to acknowledge the problem and take action,” says Olga Boyko, Climate Expert, Ecodiya, Coordinator of CAN International Climate Network, co-coordinator of Climate  March in Kyiv.

“Ukraine has to take The green new course of development! Our people need a big uniting dream for which we`ll work. Transition to 100% of renewable energy sources could also become this dream, which will lead to energy independence from our eastern neighbors. The scenario of such energy transition is already developed by scientists from the Institute of the Economy and Forecasting of the National Academy of Sciences of Ukraine. Since the main reason for climate change is burning of coal, gas, and oil, the main solution is to rapidly switch to clean and safe energy. Even if the global temperature didn`t rise, we are not able to burn fossil fuels for long. We have resources only for a few decades. Today Ukrainians have gathered up on the streets of their cities to show that they are ready to change and they need the support of the leaders of the country,”  – says Julia Melnyk expert of the development of RES, 350.org in the EECCA region.

“We joined the biggest wave of climate actions in history. It had happened neither in Ukraine nor in the world. 156 countries, 5200+ events on the world map. More than 2000 people in Kyiv from 20 cities and in 5 more cities at the same time. We united to demand to cut the greenhouse gas emissions and to prevent climate catastrophe. We want just and safe future for us and the next generations,” – assures Inna Datsiuk, peoples coordinator, 350.org in the EECCA region, co-coordinator of Climate  March in Kyiv.