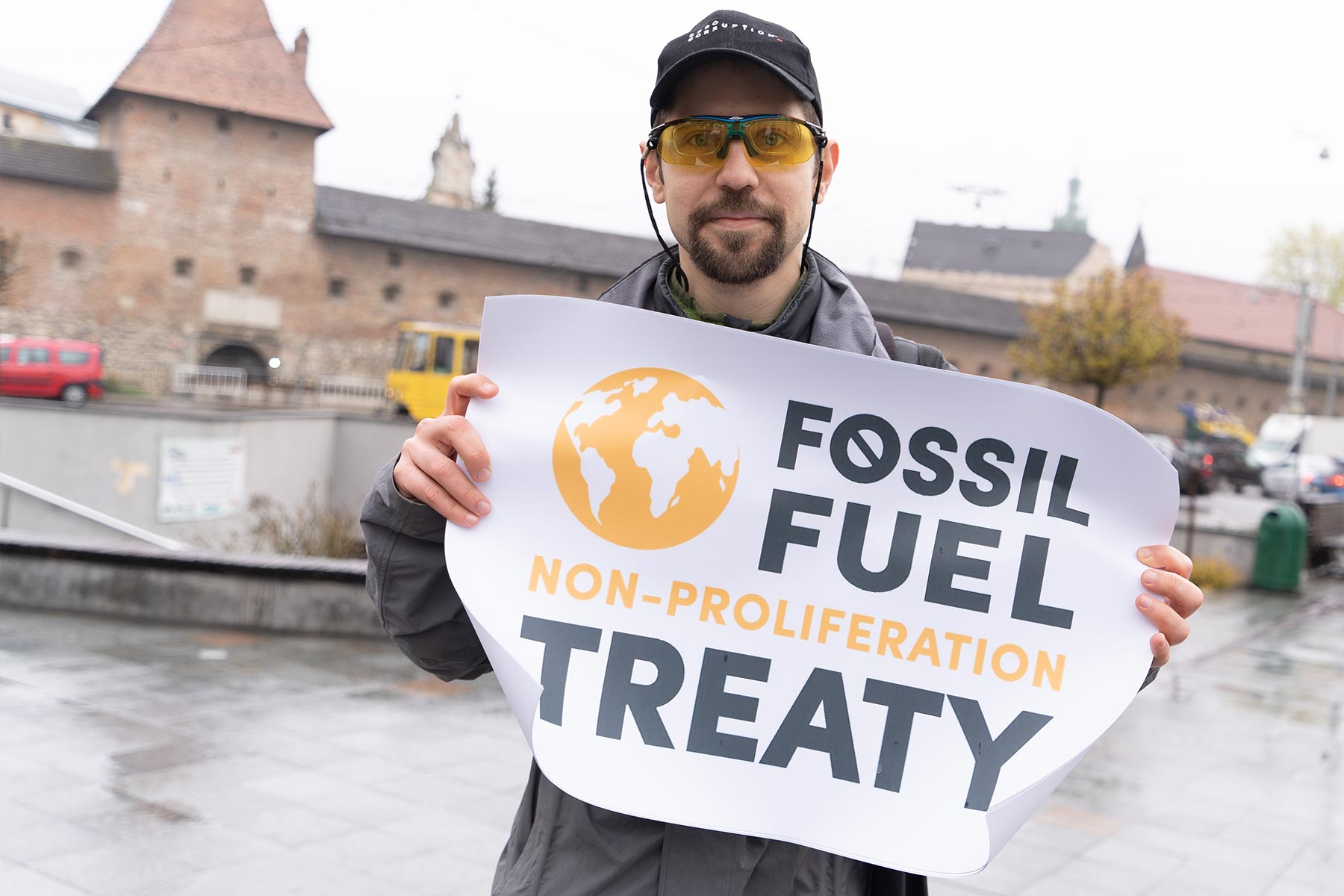 Scientists and activists have been warning for decades that unlimited extraction and burning of fossil fuels poses a dare threat to humanity due to climate change. Now Ukraine and Ukrainian people are facing even greater and immediate danger.

After all, Russian coal, oil and gas industries, which bring 40% of the revenue to the budget of the aggressor country, continue to finance the bloody war, while the world, desperately addict to fossil fuels, delays phase-out of supplies of these resources from the aggressors and is in no hurry to switch to renewable energy sources.

“Climate change is as much a threat as nuclear weapons” – this is a statement from more than 400 NGOs that initiated the global Fossil Non-Proliferation Treaty. For Ukraine, the world’s addiction to fossil fuels is a weapon with which the Russians continue to relentlessly destroy our people and entire cities. Therefore, this Treaty is of utmost importance for Ukraine. Here is what it involves and how it works.

Why the world needs a new agreement to combat climate change

The global threat posed by climate emergency requires global solutions and cooperation between all countries of the world. Stopping the rapid rise in global average temperatures, and with them the dire consequences it can have, is possible only if all countries around the world begin to drastically reduce their greenhouse gas emissions. This requires, in particular, reducing fossil fuel consumption and replacing them with renewable energy sources.

According to scientists, in order to keep global warming at an acceptable level – not higher than 1.5°C from the pre-industrial level – by 2030 emissions must be reduced by at least 45%.

International dialogue to address the necessity of emissions reduction has been built for a long time. In 1992, almost two hundred countries signed the UN Framework Convention on Climate Change. It was followed by the 1997 Kyoto Protocol, which called on developed countries to reduce greenhouse gas emissions. And although during the first period of its operation, the Annex I countries, which had industrialized economies at the time, met their stated goals, global emissions continued to grow. The Paris Agreement of 2015 has now entered into force, the main goal of which is the same – to reduce emissions.

However, Paris Agreement concerns the reduction of greenhouse gas emissions and does not address the issue of limiting the extraction and use of fossil fuels. Moreover, the text of the agreement itself does not even mention the words “fossil fuel”, while its combustion has caused 80% of anthropogenic carbon emissions since the beginning of the Industrial Revolution. In addition, according to the latest data, in 2018, one in five deaths in the world was caused by air pollution from burning fossil fuels. In Ukraine, according to estimates, 2,690 people died due to emissions from coal-fired power plants in 2019 alone.

Today thousands of people are dying in Ukraine under devastating rain of Russian missiles, bombs and shells, in a war that became possible because of the EU’s, and especially Germany’s, addiction to Russian fossil fuels.

According to the latest data from the United Nations Environment Program (UNEP), published in the Emissions Gap Report 2021, to keep warming within 1.5 °C, global fossil fuel production must be reduced by at least 6% per year on average this decade.

As scientists stress in their letter in support of the Treaty, global efforts are currently aimed only at reducing the demand for fossil fuels, while supply (i.e. production) continues to grow. This means that either it will continue to be burned, or companies and entire countries, who are dependent on extraction of fossil fuels, will face significant problems caused by misinvestment in mining and drilling, which will affect workers and citizens.

So, in order to stop all new projects in the field of fossil fuel extraction and gradually phase-out the existing production, the Fossil Fuel Non-Proliferation Treaty was launched. It acknowledges that fossil fuels are the main cause of the climate crisis, and declares readiness to end addiction to them forever, as half a century ago such an initiative prevented the total destruction that was looming by threat of the spread of nuclear weapons.

The agreement is based on three main pillars, which those who support it promise to abide by.

The first is the non-proliferation of fossil fuels – the abandonment of any new exploration and production projects for coal, oil and gas. Currently, the world plans to produce twice as much fossil fuels as it can afford to keep the average global temperature rise at an acceptable level. And while countries around the world are trying to pursue more ambitious targets for reducing greenhouse gas emissions, energy companies plan to increase production of fossil energy resources, which cause these emissions in the first place, by an average of 2% annually.

Secondly, an equitable reduction – curtailing the existing production of fossil fuels in accordance with the goal of preventing the average global temperature from rising above 1.5 °C from pre-industrial levels (currently, according to scientists, the world has already crossed the 1 °C mark). The initiators of the Treaty believe that it is necessary to start regulating the supply of fossil fuels – limiting production, shrinking unnecessary infrastructure, waiving fossil fuel subsidies and redistributing support to safer alternatives, as well as supporting indigenous peoples and other communities affected by environmentally hazardous fossil energy projects.

And third, accelerated just transition for all workers, communities and countries. For many communities, the energy industry is the backbone of their economy. For example, there are about 40,000 miners in Ukraine and there are even entire cities whose lives are built entirely around the coal mine. These communities risk losing their main – and often only – source of income if mines close. Therefore, the phase out of fossil fuels must be accompanied by the support of dependent regions and the development of alternatives, such as new safer renewable energy facilities to ensure a secure and sustainable energy supply in our cities, and the creation of new employment and career opportunities.

Who has already joined

The Treaty is now open for endorsement to all those who agree that the fossil fuel era must come to an end. It was supported by open letters from 101 Nobel laureates and 2,755 scientists and academics. In addition, it has already received support from more than 1,250 NGOs and more than 150,000 people from around the world. They all call for an end to fossil fuel extraction and to provide support for those who have already suffered from it or may suffer.

But this is not just an initiative of the active public, which wants to express its position. 43 cities in the United States, Canada, Australia, Costa Rica, Nepal and European countries, including the city of Paris, have already endorsed the Treaty. Their city governments have officially acknowledged the threats posed by fossil fuel extraction and use and have agreed to abide by the Treaty. The initiative offers a draft document for cities, which each of them can adjust and adopt at the local level.

But the struggle against fossil fuels should not end with promises, so the initiators of the Treaty have also prepared instructions for cities on what they can do to fulfil their promises. And cities can actually do a lot: from appeals to other cities or even national states to support the Treaty in the same way, to ban the advertising of fossil fuel companies, or to limit the activities of these companies on their territory. For example, Los Angeles, a city that has endorsed the treaty and is already suffering from the effects of climate change, such as heat waves, droughts and more frequent hurricanes, plans to curtail oil production (California produces more than 8% of its oil in the United States) and halt construction of new gas power plants.

The initiators of the Treaty also provide guidance for those who are in cities that not joined yet. An instruction was developed with all information about the Treaty, samples of official appeals, and arguments in support of it, so that local activists can appeal to their city authorities and urge them to join the Treaty. Extensive support for the initiative by local authorities will eventually force national governments to sit down and negotiate the Fossil Non-Proliferation Treaty at the UN level.

This year marks half a century since the first UN environmental conference, which was held in June 1972 in Stockholm and launched many international treaties in the field of environmental protection. In commemoration of this date, the Stockholm+50 Summit will be held on June 2-3, which can become a turning point in the fight against climate change. To this end, government officials meeting in Stockholm must recognize the need for a Fossil Non-Proliferation Treaty and launch its implementation process.

Thirty years ago, Ukraine became the first country to renounce nuclear weapons in favor of a peaceful end to the Cold War. Today, we can be the first country in the world to support the Fossil Non-Proliferation Treaty and launch its implementation at the UN level. The Government of Ukraine has a historic chance to show real leadership in the fight against a new deadly threat – climate change, which threatens the extinction of not only humanity but also most species of animals and plants that live on Earth today.

Protecting the environment and protecting peace are inseparable. The atrocious war in Ukraine is just one of many wars caused by the world’s devastating addiction to oil, gas and coal. If we continue to base our economy on dirty fossil fuels, from which authoritarian regimes feed, violence and brutal wars will continue to be allowed around the world and the climate crisis will intensify. The whole world must unite against fossil fuels, dictators and wars.

Starting from 22 April – the Earth Day – activists in many countries in Europe and the world will demand an immediate embargo on all fossil fuels from Russia and an end to global dependence on fossil fuels. We call on Ukrainians who are currently abroad to join actions in all available locations.