War and the Sea: How hostilities threaten the coastal and marine ecosystems of the Black and Azov Seas 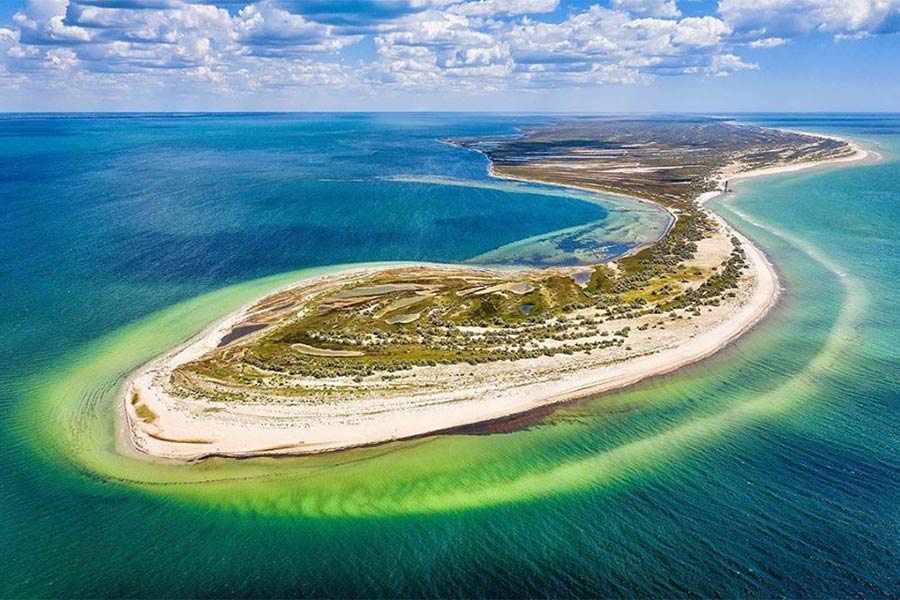 Active marine hostilities and Russian warships currently stationed in the northwestern region of the Black Sea not only block Ukraine’s seaports, putting the world at risk of global famine, but also create man-made disasters that seriously affect the coastal and marine ecosystems of the Black and Azov Seas.

The Azov-Black Sea coast in southern Ukraine is a kaleidoscope of unique coastal and marine habitats, including estuaries, lagoons, islands, salt marshes, and seagrass meadows, which, together, are home to hundreds of rare species. Many protected areas created to preserve this diversity are found here. Today, these protected areas and water bodies face potential destruction. The Black Sea Biosphere Reserve, National Parks Azovo-Syvasky, Dzharylgatskyi, Meotida, and others are squarely in crosshairs of hostilities and a humanitarian crisis. Here, the war renders it impossible to ensure the safety of protected area employees or implement conservation measures to ensure proper protection and preservation of rare species.

Territories of many protected areas were also affected by fire. The total surface area of fires in Ukrainian forests has increased a hundredfold since the beginning of 2022 (compared to the same period in the previous year). These fires have affected many reserves in coastal areas in Mykolaiv and Kherson regions: Biloberezhya Svyatoslava National Nature Park, Kinburn Split Regional Park, Black Sea Biosphere Reserve, and the Lower Dnipro National Nature Park. In May, the Kinburn Spit Park, located on the Black Sea coast and home to unique coastal habitats, burned. It was not possible to extinguish the fire due to Russia’s occupation and minefields. The nesting places of wild birds and the largest orchid field in Europe were under threat. The full extent of the damage is difficult to assess at this time, but preliminary estimates suggest that the fires damaged almost 2,000 hectares of forest and coastal ecosystems, resulting in the deaths of rare animal species and harm to Kinburn Split’s unique sand habitat flora. Fires of this scale had not been seen on the Kinburn Peninsula since World War II. 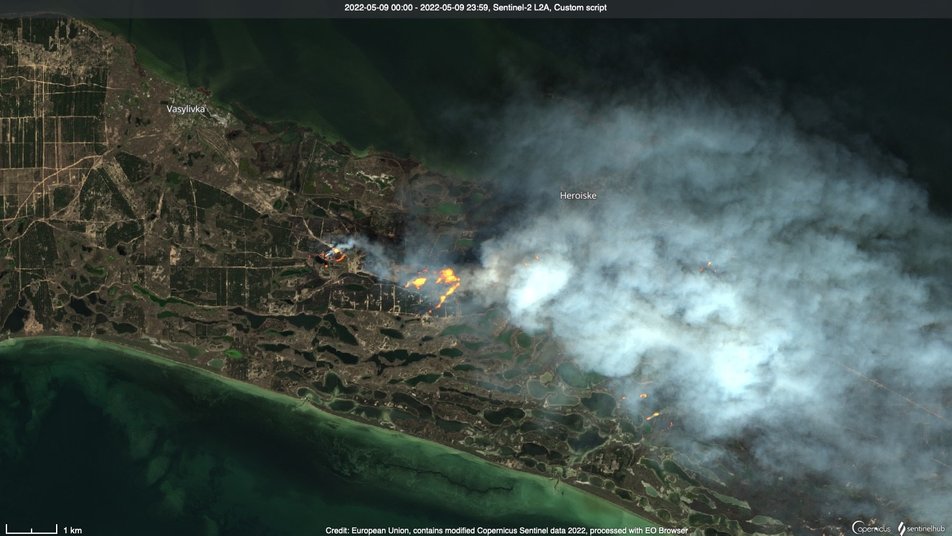 Military equipment movements and construction of fortifications lead not only to the physical destruction of soil and vegetation, but can also pose a threat to coastal marine habitats. Biotopes in the swash and surf zones containing unique biodiversity among the sand and shells, may also be damaged during coastal minelaying, explosions, and sand mining from beaches for use in building fortifications.

The consequences of Russia’s military actions for coastal ecosystems can already be seen in some nature reserves on the Crimean Peninsula, occupied since 2014. In particular, the condition of Opuk Nature Reserve, essentially converted into a military training ground, is very revealing. Bombing, military equipment movements, detonation of acoustic bombs in the sea, and troop landings during Russian military exercises have all distorted local coastal, steppe, and estuarine habitats.

Underwater marine ecosystems are also affected by hostilities. Remains of sunken ships and missiles, anchor usage, and munitions explosions can damage underwater communities on the seafloor. The greatest biological diversity is usually concentrated in benthic seagrass or algal communities, so damage to them may be a determining factor for the entire ecosystem. While the remains of sunken ships can serve as the foundation of new habitats on artificial “reefs” colonized by aquatic organisms, damage stemming from long-term pollution still far outweighs any potential benefits. 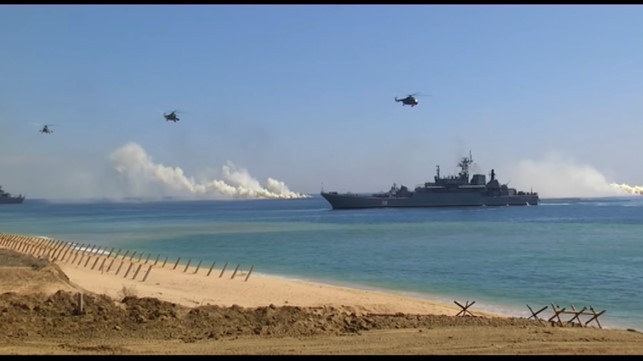 In addition, warships do not only disturb the delicate balance of underwater ecosystems when they sink. Vessels can also accidentally introduce non-native invasive species into regions where such species were not previously present. This, in particular, can happen through the discharge of ballast water, generally governed in peacetime by laws and regulations and overseen by relevant authorities. In the early 1980s, Atlantic comb jelly Mnemiopsis (a jellyfish relative) was introduced in Black Sea via ballast water. This biological invasion shook the entire Black Sea ecosystem and resulted in huge economic losses due to reductions in anchovy stocks.

Animals suffer both above and below the water’s surface

Military actions can also directly affect marine animals, threatening their existence. Underwater explosions cause a shock wave that can travel long distances underwater, stunning fish and killing other organisms. This effect has already been observed in Ukraine’s freshwater bodies during this war. In particular, the Irpin River near Kyiv was threatened with ecological disaster by the sheer number of carcasses of fish killed by airstrikes. This is primarily a result of the anatomical structure of bony fishes, which have a gas-filled swim bladder that bursts readily in the event of large pressure drops.

Explosions can also pose a serious threat to marine mammals, especially those that are already vulnerable, listed in Ukraine’s Red Book, and protected by many international conventions. There were specific cases in the Baltic Sea in 2019 where several porpoises (small cetaceans found in the Black Sea) died as a result of damage to their hearing organs caused by explosions during removal of World War II mines in the sea. 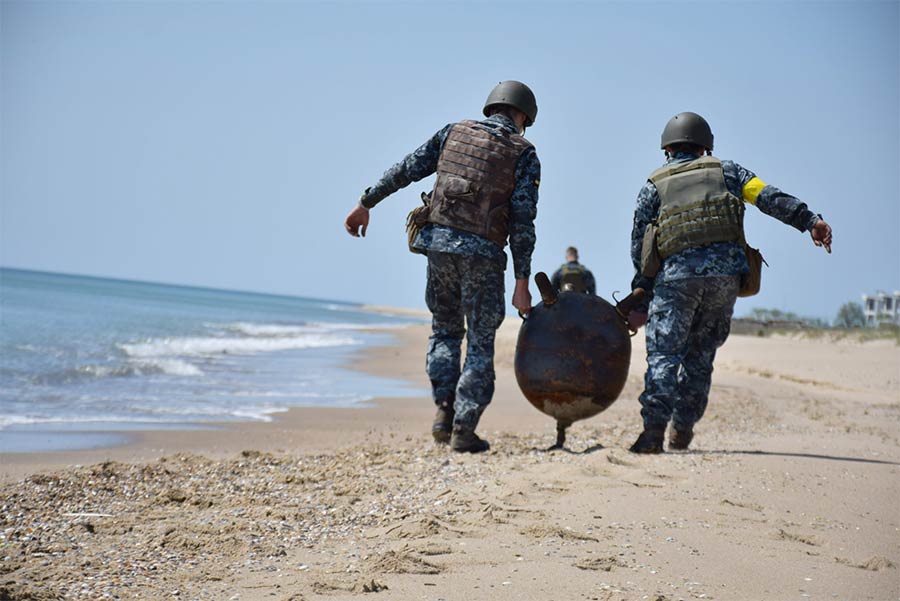 Scientists in Black Sea countries began to record cases of dolphin mass mortality at the start of active sea-based hostilities in early March. Cases have been documented on the coasts of Ukraine and Turkey, where an extremely large number of White-sided dolphins washed ashore, a rare event on those coastlines. Dead and disoriented dolphins with wounds and extensive burns, most likely received as a result of explosions, were found on the coasts of Bulgaria and Romania. Scientists say that mass dolphin mortality in the Black Sea may be the result of a combination of several simultaneous factors. Detailed research is needed, but preliminary data already indicate that Black Sea dolphins are another innocent victim of this war.

In addition to explosions, warships and submarines, now continuously patrolling the Black Sea with the use of sonar, can also pose a threat to dolphins. The acoustic frequency used by cetaceans coincides with marine sonar frequencies, a fact that may damage the animal’s hearing. Dolphins rely on echolocation for most biological aspects of their lives, and the use of sonar technologies can affect their behavior and ability to survive. 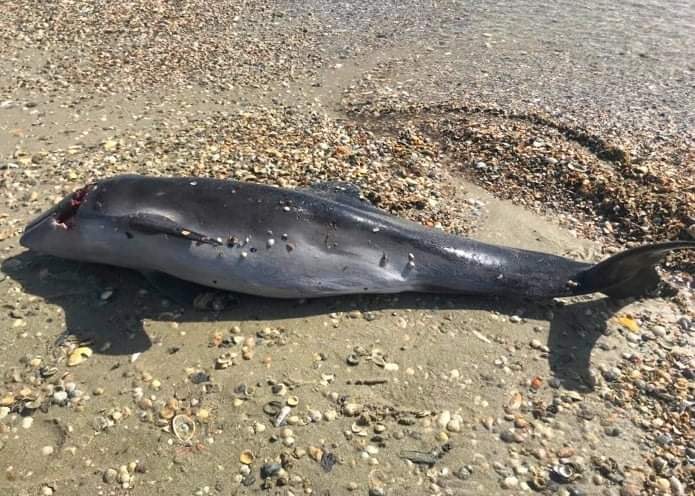 The Azov-Black Sea coast of Ukraine generally plays a key role in the conservation of many European bird species. Active hostilities threaten the survival of such rare species, are a habitat disturbance, and interfere with nesting and migration. Russia’s seizure of eastern Ukraine is a striking example of the war’s impact on birds. Prior protection of sand spits on the Azov coast and creation of Meotida National Nature Park in 2009 resulted in a rapid increase in populations of rare wetland birds. Great black-headed gulls, Dalmatian pelicans, Oystercatchers, and many other species listed in Ukraine’s Red Book nested in the park. This diversity immediately vanished when the war came to Kryva Kosa Spit in 2015. In subsequent years, only certain species continued to nest there in small numbers.

Wartime pollution of the marine environment

Sinking of warships, aircraft, and other military equipment can lead to oil spills toxic to marine life and can poison the marine environment for decades. According to expert estimates, hostilities during World War II resulted in more than 15 million tons of oil being spilled into the Atlantic Ocean alone. In the Pacific Ocean, where hostilities also occurred, hundreds of sunken ships still lie in numerous straits between islands. Although this underwater ship graveyard, known as the Iron Bottom Sound, attracts tourists and divers, oil products, chemical compounds, and unexploded shells from these ships still pose a danger to people and the marine and coastal environments, as well as to the region’s fisheries.

Unfortunately, past events have provided significant experience in addressing the impacts of oil spills on the marine environment. The largest oil spill in the marine environment occurred specifically as a result of war. In 1991, during the Persian Gulf War, up to 11 million barrels of oil were spilled into that sea, resulting in serious environmental consequences for the region. Spilled oil destroyed nesting sites for endangered sea turtles and birds, damaged beaches, coastal habitats, and seagrass beds, and killed thousands of rare herons, flamingos, and other bird species.

In addition to pollution by petroleum products, ammunition itself poses an additional threat, sometimes causing significant environmental pollution from chemicals and metals. Some munitions may use highly toxic chemical compounds, including white phosphorus, which emits a poisonous gas, causes severe burns when ignited, and poisons soil and water when released into the environment. Phosphorus is largely insoluble in water and can persist for decades in salty seawater in oxygen deficient conditions.

To this day, chunks of white phosphorus still wash ashore on German beaches in the Baltic Sea. Roughly 1.2 tons of phosphorus ended up in the sea near Usedom following World War II bombing. Tourists are still seriously burned after finding remnants of white phosphorus on beaches, often mistaken for Baltic amber due to its appearance.

Even rocket shells and bullets themselves are often made of materials that can be environmentally toxic. In particular, lead – one of the metals most often used in bullets and shells – can negatively affect various organs in vertebrates, including the nervous system. Shells or debris left over after hostilities end can also poison birds, which often swallow small stones to aid digestion. The toxic effects of munitions residues can have significant consequences for marine organisms, disrupting food chains in ecosystems.

Chemical weapons can have an even more catastrophic effect on the marine environment. Many compounds developed as chemical warfare agents highly toxic to humans are also toxic to other vertebrates at high concentrations. They can affect some aquatic organisms and accumulate and persist for years in the natural environment. Unfortunately, our knowledge of the effects of chemical weapons on marine ecosystems is not theoretical either. Hundreds of thousands of metric tons of chemical munitions (sulfur mustard, lewisite, and nerve agents) were buried at sea after World War II, long before the world adopted the London Convention on the Prevention of Marine Pollution by Dumping of Wastes and Other Matter. Such residues still pose a threat to human life and marine biodiversity.

Destruction of coastal infrastructure, an additional threat to the sea

The seaports of Ochakiv and Mykolaiv were repeatedly attacked, the bridge over Dniester Estuary was shelled five times and completely destroyed, and heavy battles were fought on the territory of the Azovstal plant, located directly on the Azov coastline in Mariupol. Shelling damage to such facilities can lead to leakage of hazardous substances into the marine environment, endangering biodiversity and public health.

On 14 March, Russia shelled sewage treatment plants in Vasylkivka near Zaporizhzhya. A pump station was destroyed and unfiltered wastewater flowed directly into the Dnipro River, ultimately flowing into the Black Sea. Attacks on treatment facilities and water distribution facilities can cause serious damage and release sewage waters and quantities of organic compounds into the marine environment. This can ultimately lead to marine pollution and algal blooms under certain weather conditions.

Past experience from previous military conflicts illustrates the possibility of devastating consequences for the marine environment. Unfortunately, this war has already had clear negative consequences, and the ecosystems of both the Black and Azov Seas are both under threat. Munitions explosions and marine vessel movements kill dolphins, destroy unique habitats, and damage protected areas. Constant shelling threatens marine pollution from petroleum products and poisonous chemicals. These seas are currently inaccessible to researchers and we can only approximate impacts through satellite imagery and fragmentary data. Thus, the real and full extent of the damage to marine ecosystems due to the war remains impossible to assess while active hostilities continue.