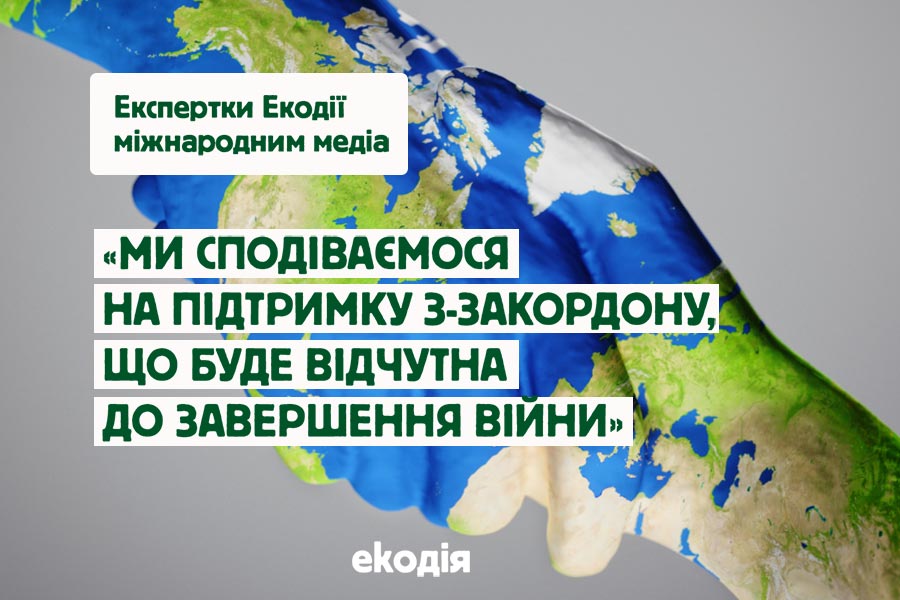 From its very first days, russia’s full-scale invasion of Ukraine has had a significant impact on the global political and economic processes. Will the EU overcome its dependence on russian energy sources? What will be the alternative: replacing them with resources from other countries or the ambitious development of renewable energy sources?

Ecoaction’s experts don’t stand aside from these important issues and together with environmental organizations and other allies do their best to defend the interests of Ukraine and the environment on the world stage. And one of our superpowers in this battle is communication with the international media.

For instance, Ecoaction’s energy policy expert Valeria Izhyk gave an interview to the author of a Chinese YouTube channel that focuses on the coverage of international relations. In it, she described the biggest challenges that the EU faces considering the energy supply, along with the further steps that European countries might take regarding the relationships with Asian countries.

“There are some reports disclosing that China and also India are increasing the purchase from the russian energy market. Although these efforts are not enough to save russian economy, this is something that can save russia from the entire economic collapse. And this is why the position of China in energy policy is so important. For this reason, as much effort as possible should be directed to this political dialog.”

Learn more on how are connected the development of renewable energy in Europe and its relations with Asia in an interview with Valeria. You can watch the video in English here:

About a week after the beginning of the second phase of the war in Ukraine, environmental and climate organizations published an open letter expressing solidarity with the people of Ukraine, condemning russian aggression, and calling on countries to prohibit the import of fossil fuels from russia and also quickly abandon all fossil fuels. The letter was signed by more than 600 organizations from Ukraine and 56 other countries, including three Israeli organizations.

Ecoaction’s executive director Natalia Gozak believes that this letter was a part of a resonance that has prompted Western countries to talk about a significant reduction in fossil fuel imports from Russia over the past few weeks. Here is her comment for the Israeli newspaper Local Call:

“I’m mostly concerned that this should have happened long before these days: eight years ago, when russia began to occupy Ukrainian territories (Crimea and the Donbas region). Іt was clear that fossil fuels were a means of influencing Europe. This was the moment to listen to the calls of the climate movement.”

Natalia made it clear that phasing out fossil fuels is a huge challenge, but it’s also a problem that requires immediate solutions.

“For years it has been cheaper to import fossil fuels from russia rather than find clean alternatives. But this ‘bargain price’ is now stained with blood.”

You can read a full article dedicated to the change of the European energy course in Hebrew or with a help of the automatic translation of the website: https://cutt.ly/AFajrPN

German organization BUND — Friends of the Earth Germany had a conversation with the Ecoaction’s head of the climate department Yevgenia Zasiadko. Among the other questions, they asked one relating how can people and organizations out of Ukraine help Ukrainians. These are some ideas proposed by Yevgenia:

“First of all, it is important to continue to report on what is happening in Ukraine. We must work together to ensure that russia pays for committed environmental crimes. We need support from abroad. I very much hope that the world will support us until this war is over.

Internationally operating companies must cease their business with russia and countries should stop importing russian oil and gas.

Many NGOs make statements about the war, but do not name russia as the aggressor. Yet abstract appeals to peace will not help us. In this war, there is only one aggressor and that is russia.”

You can read a full article in German or with a help of the automatic translation of the website here: https://cutt.ly/GFav8m8