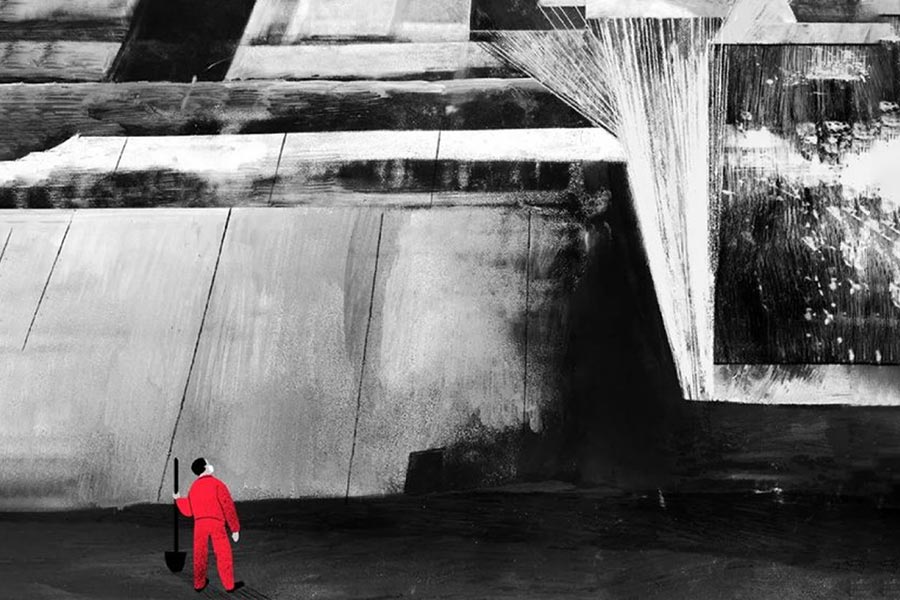 For one month Ukraine is on fire, under constant enemy shelling. Hundreds of thousands of lives were cut short or broken. According to the UN, 3.5 million Ukrainians left the country after the month of the war, another 11-12 million resettled in other regions. My family and I had to leave home because of the active shelling of Kharkiv. Russia has destroyed not only human lives, but also the environment of the country, the consequences of which Ukrainians will feel for years to come.

More than one hundred. This many environmental crimes caused by Russian aggression were collected by Ecoaction staff from open sources during the first month of the large-scale war. The conflict brought new environmental risks threatening to increase the number of war-related casualties. Crimes against the environment are also part of war crimes.

According to the Geneva Convention, “it is prohibited to use methods or means of warfare intended to cause or may be expected to cause widespread, lasting and severe damage to the natural environment”.

From the first days, shelling and bombing of industrial and energy facilities, burning of forests, blowing up oil depots, and polluting the Black and Azov Sea (primarily due to the ship sinking) by russian forces were recorded. On February 24, as a result of enemy shelling an explosion occurred on the territory of the Tripillya thermal power plant located on the Dnipro coast, 45 km south of Kyiv.  Trypilska TPP is the largest supplier of electricity to Kyiv, Cherkasy and Zhytomyr regions.

In early March, Ukraine’s Ministry of Environment initiated the collection of information on crimes against the environment, the initiative was joined by various civil society organizations.

The overall losses and impact of war on the country’s environment will have to be evaluated after the victory. However, the State Environmental Inspection estimated as much as USD 77 million in damages connected with land contamination. 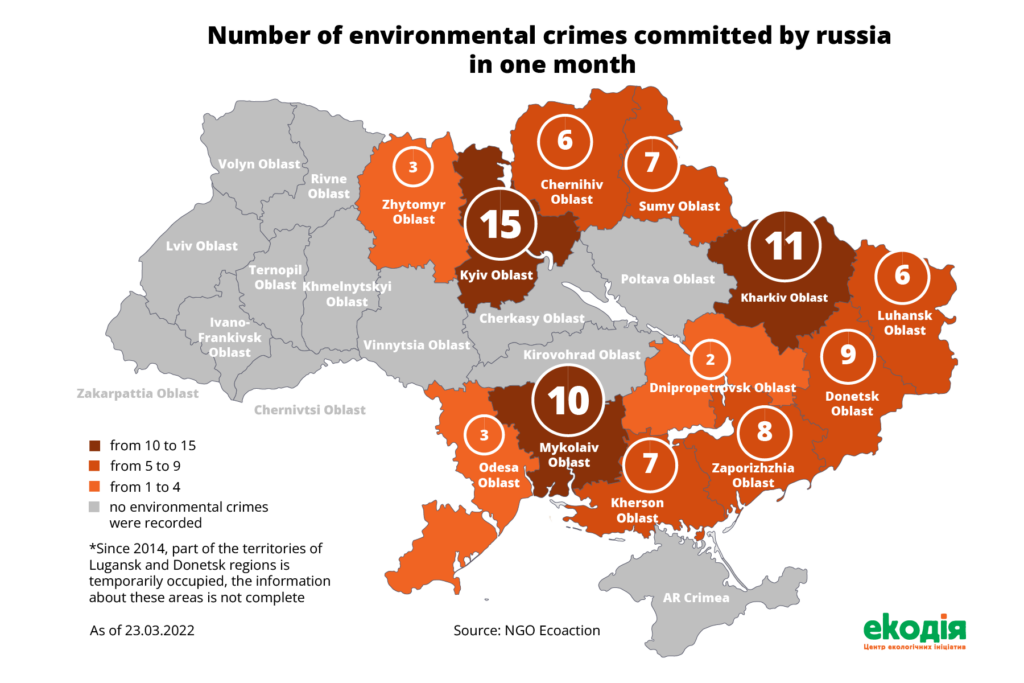 Any war poses huge environmental threats to the population. But war in Ukraine can also have particularly catastrophic consequences for the environment. The east of Ukraine is heavily industrialized. During war, the risk of environmental disasters has increased. Under normal conditions, it would be possible to localize the risks, but not under shelling and bombing. The russian army often does not allow specialists to localize negative environmental impacts. For example, on March 22 in Chornobyl Exclusion Zone was forest fire, but the State Emergency Service workers could not get there because of constant shelling. As of March 24, the fire was localized.

According to the Ministry of Environment, over the past two weeks the Exclusion zone had more than 30 fires on the area of more than 10,111 hectares. 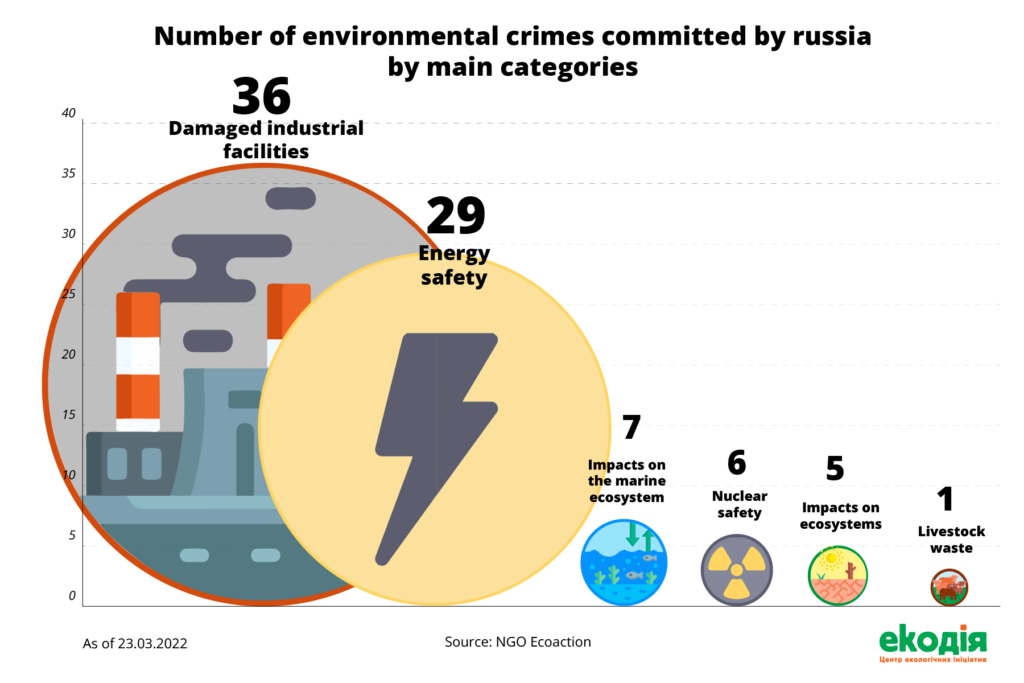 The news of the seizure of the Chornobyl and Zaporizhzhia nuclear power plants shook the world. On March 14, the occupiers detonated some munitions at the site of the seized Zaporizhzhia NPP.

At the Chornobyl plant, they damaged a high-voltage line supplying electricity that for cooling of spent nuclear fuel in local storage pools. The lack of electricity could cause temperatures to rise in the spent fuel pools, potentially releasing radioactive substances into the environment.

The wind could have carried radiation to other regions of Ukraine, Belarus, russia, and Europe. Ukrainian power engineers have repaired the high-voltage line, but Chornobyl and Zaporizhzhia plants are still under russian control.

In addition to nuclear hazards, shelling and occupation increase the risk of toxic waste emissions from industrial facilities in Ukraine. So far, the State Register of Potentially Hazardous Facilities contains information about more than 23,000 facilities, including 2,987 warehouses storing highly toxic pesticides. The most significant number of these facilities are located in Donetsk, Dnipropetrovsk, Zaporizhzhia, Kharkiv and Lviv regions. Some of these industries are located in the zone of military operations. On March 21, at the chemical plant “Sumykhimprom” near Sumy, ammonia leaked due to enemy shelling, and the village of Novoselytsia became affected by the leak. 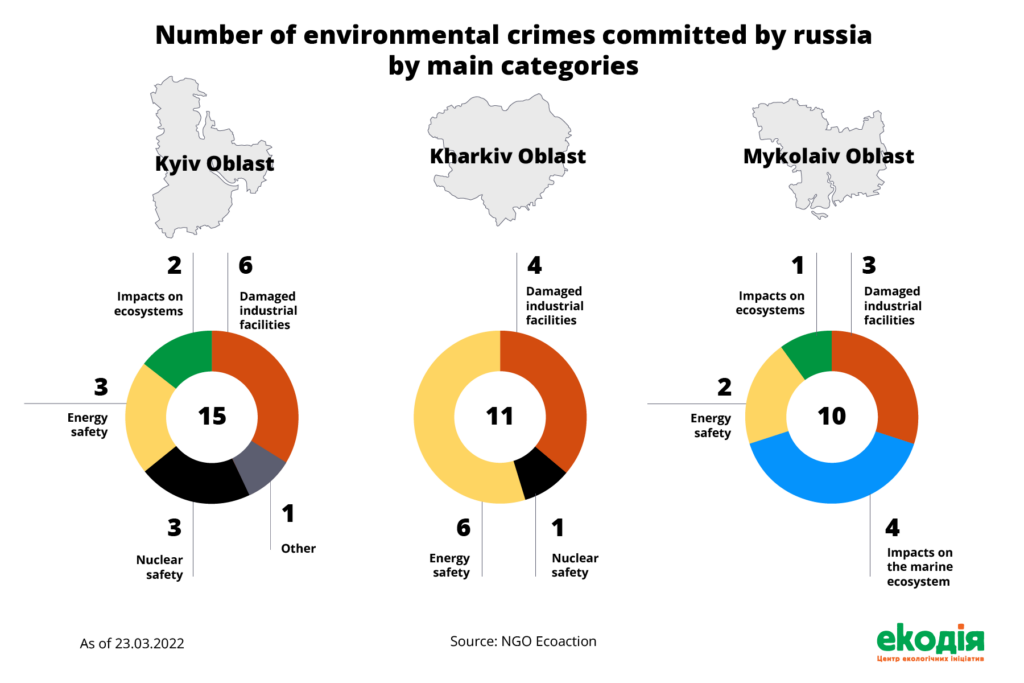 Most environmental crimes were recorded in the Kyiv, Kharkiv, and Mykolaiv regions.

In these regions, the enemy destroyed industrial and energy facilities. As a result of enemy shelling, explosions at thermal power plants, seizure and damage of the Kakhovska HPP, and damage to gas pipelines and gas distribution stations were recorded. In particular, the mining of a gas pipeline in Kharkiv on February 27 caused a powerful explosion that damaged buildings in residential areas. According to civil safety standards, an accident of this scale is a technological disaster, which means the population should immediately leave places close to the accident.

Since 2014, Donbas has been on the brink of an environmental catastrophe due to the occupation by pro-russian forces and active hostilities over eight years.

Due to the lack of free access to the occupied territories, no clear information about environmental damage over these years is available. Water supply facilities were damaged, leaving hundreds of thousands of civilians without access to water.

Energy infrastructure has been damaged causing problems to normal functioning of pumping systems, which as a result poses flooding risks on mines where toxic and nuclear waste is stored. 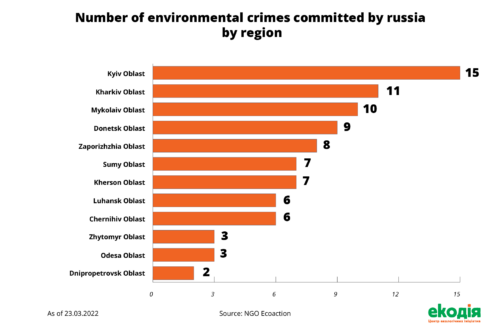 Over the past month, armed attacks on energy infrastructure took place as well resulting in the flooding of the Zolote mine, there were “Grads” firing at the Avdiivka coke plant, and the bombing of an oil refinery in Luhansk Oblast took place.

Military activities themselves pose no lesser danger: spilled fuel, destroyed equipment and spent weapons, as well as exploded missiles all contaminate the soil and groundwater with chemicals and heavy metals. Even after the war, some environmental effects will take years to emerge.

More than 1,100 missiles were already launched on Ukraine, about 4,000 units of military equipment of various types were destroyed. This will lead to an accumulation of carcinogenic debris.

Russian troops create technogenic and environmental disasters. They destroy natural areas that provide habitat for rare species and endangered settlements. According to the Ukrainian Nature Conservation Group, 44% of the most valuable natural-reserve territories are in the war zone, under temporary control of Russian invaders, or inaccessible to Ukraine.

The information gathered is only the first step in assessing environmental crimes committed by Russia. Amid hostilities, it is difficult to see the accurate scale and level of environmental pollution. There are already more than a hundred recorded crimes in just one month under these conditions. We will be able to make an accurate assessment after the end of active hostilities. Ukrainians will feel the consequences of this war for years. Therefore, it is vital to stop the war as soon as possible. Russia must pay for all crimes against humanity, the destruction of businesses and infrastructure, and crimes against the environment.

This article was first published in Ekonomichna Pravda (in UKR) here epravda.com.ua

Read the article in Spanish on the website of Ukraїner