Ukrainian environmentalist: ‘To stop the war, start moving away from fossil fuels’ 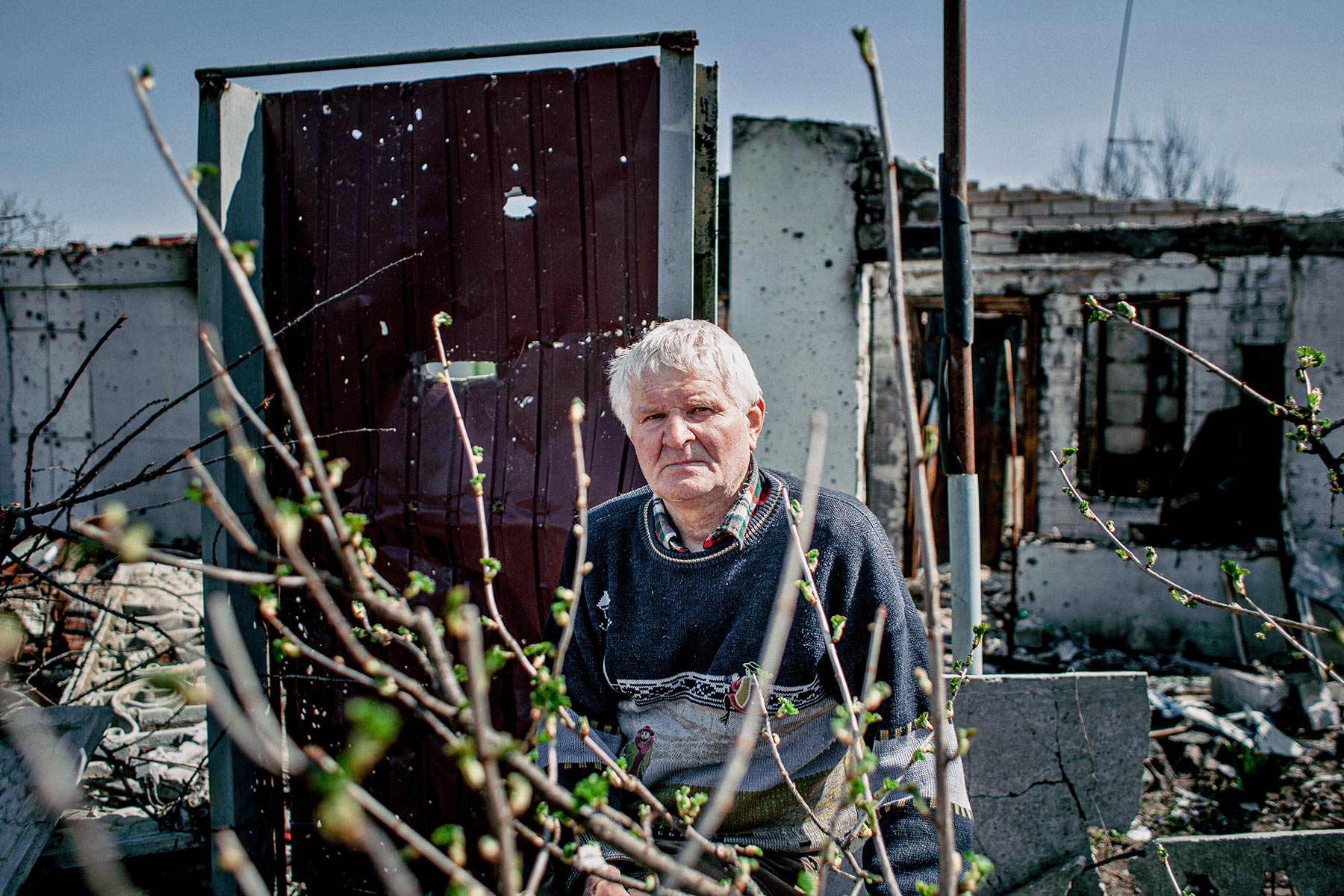 Russia’s invasion has reaped untold devastation on Ukraine’s critical agricultural sector, leading to severe disruptions on the global food market and exacerbating global hunger. Green Left’s Federico Fuentes spoke to Mykhailo Amosov, an agricultural expert at the Center for Environmental Initiatives “Ecoaction” about this situation and the link between the war and fight against climate change.

What can you tell us about the agreement signed between Ukraine and Russia on July 22, whereby Russia lifted its blockade on ships carrying food exports from leaving Ukraine’s Black Sea ports?

Ukraine is a large agricultural country. It has a huge capacity when it comes to grain exports, which is an important source of income for Ukraine’s budget. Agriculture represents about 12% of the country’s GDP, most of which comes from export sales, so Ukraine is dependent on its sea ports to receive this income.

Before the war, Ukraine had plans to export about 6 million tons a month via its sea ports. But once Russia blockaded these sea ports, this became impossible.

In the first months of the war, exports dropped to around 500,000 tons a month. This meant grains had to be stored in silos, as there was no way to get them onto the world market.

The recent agreement has given us the opportunity to export Ukrainian grain once again but, unfortunately, not on the same scale as before the war. We are only dealing with small doses of grain export, which is not enough to free up grain currently being stored in silos, much less deal with future harvests.

The agreement will at least help Ukraine earn money from sales that our government can use to help Ukrainian citizens who have lost everything.

We hope it will also help agricultural enterprises that are considering closing, given it is impossible to continue operating if your only source of income is cut off.

Beyond the blockade of Ukraine’s sea ports, how else has Russia’s occupation affected Ukraine’s agricultural sector?

I cannot find the words to truly describe its impact, but it has been terrible. Many agricultural farms have been completely destroyed and livestock animals killed due to indiscriminate shelling by Russians troops.

In monetary terms it is estimated that the war has caused about $30 billion worth of damages to Ukrainian agriculture: this includes damage caused by the blockade of about $25 billion, as well as direct damage to crops, infrastructure and farms, which is estimated to be about $5 billion.

And the war has not ended.

Already, about 10 million hectares of land has been lost for agricultural activities due to landmines, shelling, bombardments, etc. We will need a lot of funds to de-mine these territories and restore them for cultivation, but also for conservation.

Currently, 70% of Ukrainian territory is agricultural land, but we need to reduce this number to reduce greenhouse gas emissions from agricultural production and increase the amount set aside to protect biodiversity.

It is important to add that some see Russia’s attacks on Ukraine’s agricultural sector as deliberate, because of its importance to Ukraine in economic terms but also because of the role agriculture, and in particular small farmers, plays in social life.

Unlike big agricultural corporations, who have their offices in Kyiv, small farmers live, work and communicate with local people, helping others when they need it on a day-to-day basis. These same farmers are very patriotic people. Many of them have now joined the resistance.

There have been stories circulating on social media claiming Ukrainian President Volodymyr Zelensky has used the war to sell off the country’s agricultural land to Western multinationals. What can you tell us about agricultural land ownership in Ukraine and Zelensky’s policies?

The reality is that, last year, Ukraine launched its land market. Prior to 2021, there was a moratorium on the sale of land plots. From July last year, Ukrainians have the right to buy or sell land.

According to this law, only private individuals can buy or sell plots of land. Legal entities will only be allowed to participate in the land market from 2024.

There are still limitations on land sales: an individual can only buy up 100 hectares. Of course, if you belong to a large and wealthy family, you can concentrate some farmland, but it’s still not a big amount.

Once legal entities are able to enter the market in 2024, the limit will rise to 10,000 hectares, but this is only for Ukrainian legal entities, not international companies.

What international companies are allowed to do is lease land from the government or individuals for agricultural activities. In fact, this was already the case before Zelensky.

What are environmentalists in Ukraine calling for regarding the immediate situation at the Zaporizhzhia Nuclear Power Plant, and more broadly with regards to nuclear power plants?

Ecoaction was pushing to decommission Ukraine’s nuclear power plant reactors even before the war, as they already posed a danger then, given most of them are obsolete.

Now, due to Russia’s invasion, they have become an immediate danger not just for Ukraine, but for Europe and even Russia. Russia’s use of Europe’s largest nuclear power plant as a military base is a serious and irresponsible breach of nuclear safety rules.

Russia is blackmailing the world with the threat of a large-scale nuclear disaster at Zaporizhzhia — one larger than Chernobyl.

What can you tell us about the discussions regarding Ukraine’s post-war reconstruction and proposed the idea of a “Green Reconstruction”?

Ecoaction participated in the recent conference on Ukraine’s post-war reconstruction, which was jointly hosted by Ukraine and Switzerland in Lugarno on July 4‒5.

Meanwhile, concrete environmental actions are limited to small projects such as ecoducts, or wildlife bridges. Ecoducts might make for an interesting media conference and be easy to sell as taking action on the environment, but it is not what we want or need.

Instead, we need more systemic change.

What we have seen to date is disappointing, but we are focused on improving this reconstruction plan and hope we can achieve changes.

We hope at some stage, the government will organise roundtables with representatives of civil society to discuss these issues, where we can provide our vision and principles for sustainable reconstruction.

Now, we face the difficulties of war and martial law, which makes it impossible to access and disseminate information freely. This makes it harder for us to campaign.

The reality is that even before the war, the environmental movement in Ukraine was quite weak. So support from other environmentalists around the world is important.

We will have a lot of work to do when it comes to rebuilding a better Ukraine, so we will need support for this process. Of course, for now, the best help you can give is to support Ukraine win this war.

Ecoaction argues that climate change and the war against Ukraine have a direct link. What is this link?

The answer is fossil fuels. Russia has a lot of fossil fuels it can sell to finance its war machine. At the same time, there have been a lot of discussions at the United Nations level regarding the need to move away from fossil fuels.

Moving away from fossil fuels is a means to stop the war in Ukraine, prevent future resource-based conflicts and build more sustainable economies based on renewable energies.

Despite the stated support of European countries, EU imports from Russia have grown in monetary terms. What does this tell us about their support for Ukraine and their interest in moving away from fossil-fuels?

They are trying to avoid any disruptions at home; I can understand that. And we are very thankful for their financial support. But if they really want to help us, they should move quickly to close the gas pipelines from Russia.

Globally, we need to speed up the deployment of clean energy to replace fossil fuel imports and ease the high fuel prices which are driving up Russia’s revenues.

Our main request to European countries is to move faster. I can understand how difficult it is to break links with Russia, but this needs to be done to stop this war and save Ukrainian lives.