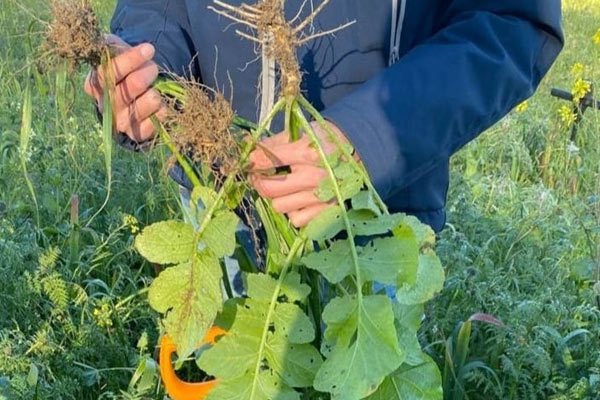 ‘A farmer’s shoes can be new no more than two hours after he leaves the office,’ Viktor Filatov wrote on his Facebook page. Viktor is the head of Kharkiv Seeds LLC, an agricultural company located in the Kharkiv Region. It produces and sells seeds under the FDseeds brand in Ukrainian and foreign markets.

Viktor was 25 when he founded the company together with his partner. The enterprise specializes in the cultivation of grain crops and implements eco-practices to improve soil fertility with so-called ‘green’ fertilizers. Viktor popularizes this method in the country, because he is sure that it is much more efficient than the use of mineral fertilizers.

The entrepreneur personally told us about siderates (green fertilizers) and his experience of using them.

Victor’s agricultural enterprise cultivates land in the Kharkiv and Valky districts of the region. By education, Viktor Filatov is an agronomist and Candidate in Agricultural Sciences.

‘My parents were connected with biology. I worked as an agronomist at one of the enterprises of the Dnipropetrovsk region, and at the same time consulted other agricultural companies. However, this was not enough for me, and at the age of 25, together with my partner Andrii Diakov, I established my own business, an agricultural enterprise with a niche focus (author’s note: they grow crops that are in demand on the market, but the volume of their production is small),’ the agrarian says.

Kharkiv Seeds LLC has been operating for 11 years. It is engaged in the cultivation of grain crops (except rice), leguminous crops and oilseeds and seed production: the cultivation of alfalfa, Sudan grass, flax, and seeds of cover crops (‘green’ fertilizers). 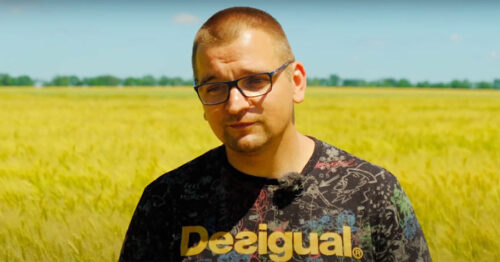 Ecological Practices in the Fields

10 years ago, Viktor got acquainted with the works of Brazilian and American scientists. They claimed that the cost of mineral fertilizers in the world would increase (which we are seeing now). They also mentioned that the soil has a much higher potential if used correctly.

The concept is to have living plant roots present in the soil that is continuously cultivated, except in the wintertime. That is, it is necessary to use the so-called ‘green’ fertilizers or siderates. They are grown as intermediate plants between harvesting and sowing the next crop. In this way, it is possible to level the fall in yield and improve the fertility of Ukrainian soil.

For the first two years after the establishment of the Kharkiv Seeds enterprise, the farmers experimented with different mixtures of plant seeds, with different crops and their cultivation. They learned from their mistakes and improved. This gave positive results. 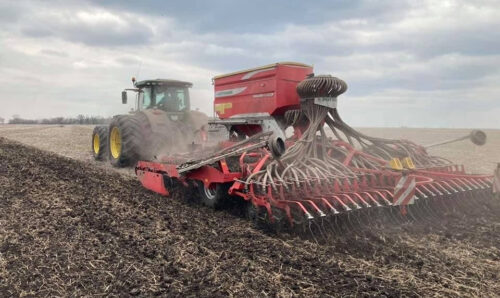 ‘When we started implementing our method, the soil had 1.8-2 % humus. Over the 10 years of sowing these fields with cover crops, it was possible to increase the content of organic matter by 30-40 %, and accordingly, the quality of the fertility of these soils increased.

‘On each hectare, we have 10-12 % of what lies in the form of nutrients and is available to plants here and now. Everything else is poorly available or practically unavailable. Over millions of years, plants have learned to release the necessary useful elements. Therefore, after all crops that are cleared from the field early, if possible, we sow mixtures of certain plants. They make it possible to accumulate vegetative mass and release some of the inaccessible elements of the soil,’ Viktor says.

In addition to everything mentioned above, ‘green’ fertilizers contribute to biodiversity. For example, a mixture of 7-8 crops is sown after wheat. These grasses bloom and smell, some of them attract predatory insects, and entomophagous parasites, which, in turn, create a biotic barrier of protection for the farmer’s crops.

According to the agrarian, on any field in the Kharkiv region, the soil is in average or poor condition. Viktor Filatov is sure that this situation can be changed for the better in an ecological way.

‘We provide siderates of the farms interested in this. In Europe, this is the practice enshrined at the European Union level. Abroad, farmers are not allowed to leave fields fallow for more than a month after harvesting certain early crops. They must sow cover crops. It is not necessary for us yet. But little by little, our farmers are beginning to understand that this initiative allows improving the soil, significantly increase productivity and profitability of agricultural production,’ Viktor Filatov says. 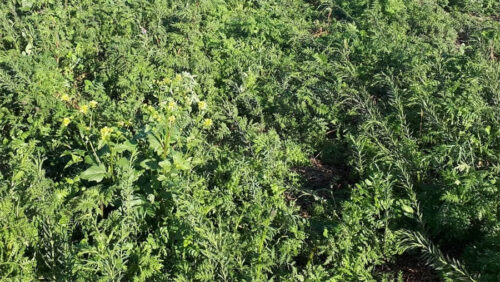 The Importance of Agriculture in Ukraine

Agriculture in Ukraine is one of the key sectors of the country’s economy, especially in rural areas. The agro-food system of the country became one of the targets of the aggressor in the war. This period has forced a new appreciation of the work of farmers, as well as a rethinking of how we produce food, and how we will restore our agriculture and create truly sustainable food systems.

Why is it important to pay attention to the topic of ecological practices in agriculture? Why should they be one of the priorities now, when the issue of food security is particularly acute?

Green reconstruction of the agricultural sector and rural areas is a way for sustainable development of communities and the country, full-fledged development and integration into the European community.

The issue of a healthy environment is the issue of food security, access to food and the key to a healthy life. After all, agriculture needs a clean environment: healthy soils, accessible and unpolluted water, favourable weather conditions and a variety of sustainable ecosystems. 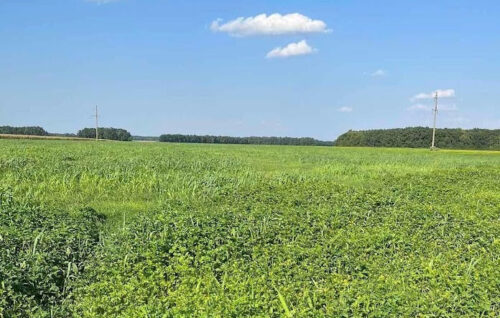 Special Equipment Is Must

By implementing ecological practices, the Kharkiv Seeds agricultural enterprise managed to reduce the use of mineral fertilizers in the production of agricultural products by 70-80 %.

Growing and collecting siderates seeds is very difficult. Harvesting the seeds of ‘green’ fertilizers has its specifics. To do everything without mistakes, farmers spent a lot of time studying various processes. As a result, it was necessary to buy special rather rare harvesters and specific equipment for cleaning the seeds of various crops.

‘An average farmer does not need this, as he can simply buy ready-made mixes, sow and get the result,’ Victor says.

Lack of Support for Eco Practices in Ukraine

The difficulty of implementing ecological practices in Ukraine is that such initiatives are not supported by the state. This is what hinders all farmers in the territory of our state. Besides, universities do not teach the application of these methods.

‘The practices we introduce are not new. They are 40-50 years old. Everyone and everywhere used to know what siderates were. However, the fact that they need to be sown permanently is currently not mentioned in the educational programs of our universities. It helps that a number of farm owners and very successful agronomists travel to Europe or the USA, see the practices there, read articles in foreign publications and implement this experience in their farms. These are little-known and little-discussed initiatives at the state level in Ukraine,’ the farmer says. 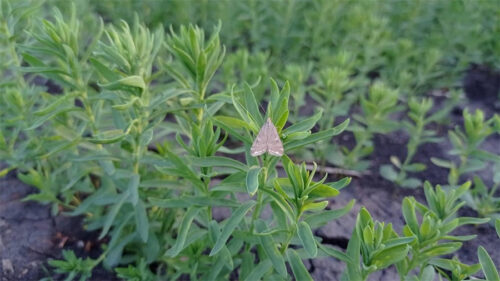 The Main Obstacle Is the War

As for climate change and its impact on the surrounding world, currently, according to the farmer’s observations, periods of drought and periods of heavy rainfall are increasing.

‘If we analyse climate data for 40-50 years, we can say that it is getting warmer. For example, in the Kharkiv region, winter barley is now sown. Previously, it was a rarity for our region because it is a culture sensitive to frosts. It cannot be said that weather conditions have a very negative effect on agricultural activities. And yet, we have to adapt to climate change,’ Viktor Filatov says.

What negatively affects the agricultural sector is the war. Currently, there are problems with the sale of products, with logistics, the cost of mineral fertilizers and power outages.

According to Viktor, the fighting took place at a distance of 8-9 km from the fields of his enterprise. Then the enemy was driven away. The company managed to sow almost 99 % of its land. However, enemy shells left craters in the fields. In some areas, 5-6 shells were found. They were removed and disposed of by sappers. 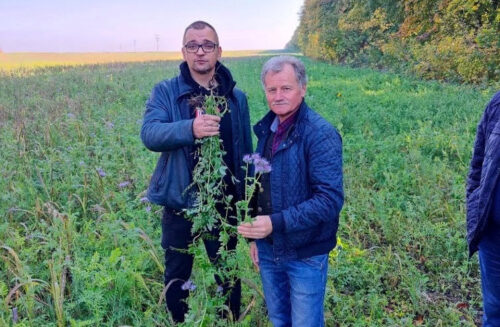 ‘Artillery shells do not harm the environment as much as missiles that are fuelled by various dangerous types of fuel. This can have a very negative effect on the quality of the soil. These factors require study and analysis. Fortunately, no missiles landed on our fields. But there were a lot of artillery shells,’ the businessman says.

He emphasizes that it is difficult for any agricultural business to work in the conditions of war, but for now, it is more or less realistic.

Viktor advises his fellow farmers, who want to implement eco-practices similar to his, to learn, think and not be afraid to try.

The material was prepared within the framework of the Perspectives for Sustainable Development of Rural Areas project with the financial support of the Ministry of Foreign Affairs of the Federal Republic of Germany.