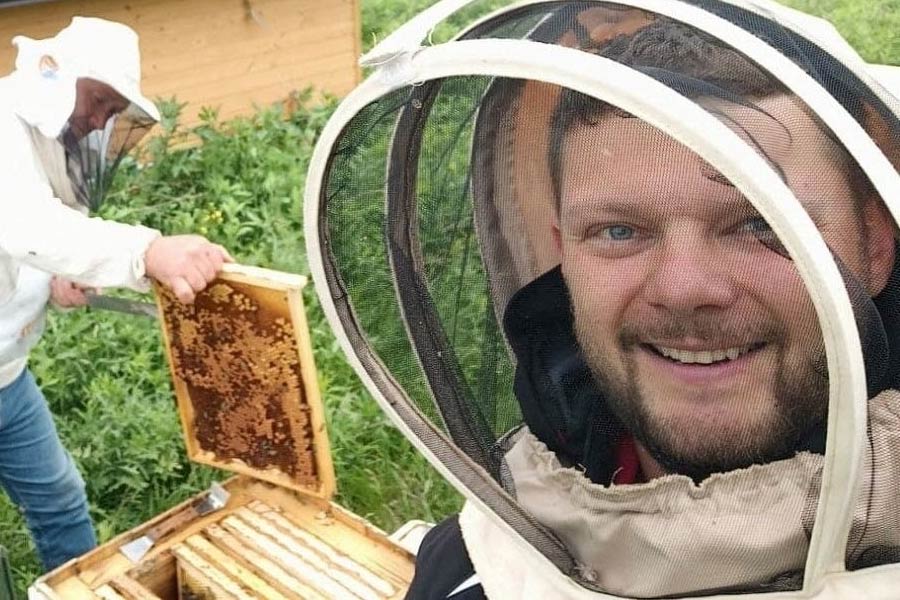 Not far from the field where the Yak Bdzhola (‘like a bee’) farm grows organic berries, there is a forest with an oak tree. They say, if one rubs the tree and makes a wish, it will certainly come true. This year, during the tours, all the guests touched the trunk of the oak tree and made one wish for all of us — our victory.

Oleh Bachynskyi, a co-owner of the Yak Bdzhola cooperative, told our journalists this story as well as how to farm ecologically.

To Benefit both Man and Nature

Oleh says he had never been engaged in farming before. His main speciality is geodesy and land assessment. His colleague, Taras Balandiuk, grew berry seedlings and landscape crops near the house.

Once the men met for coffee, chatted, and from that conversation, the idea was born — to create a farm.

‘Our idea was to grow ecologically clean berries. It came into being after I saw the results of using pesticides on other farmers’ fields. We did not have much experience growing on a large scale. That is why we started studying and consulting with specialists. And we are still learning,’ Oleh Bachynskyi says.

It was decided to grow alpine strawberries, strawberries, blackberries, rose hips, raspberries, elderberries, and roses. All these cultures are characteristic of the Lviv region.

Recalling how they started, the farmer admits they were not worried. On the contrary, it was very interesting and exciting. Even now, when it has become very difficult, they are not worried.

‘We were interested in doing it ourselves. I came to the fields of farmers who used intensive technologies, that is, used pesticides and nitrates as part of fertilizers, and I saw that even bees did not fly there. I did not like it much and I often debated with them on the topic. We wanted to do it differently,’ the farmer says.

Differently meant that there should be benefits for nature, for the soil, and for man. Farmers decided to grow organic products without the use of harmful products so that children could consume food without harm to their health, as well as to reduce damage to the environment, in particular to land and water.

Oleh Bachynskyi says that consumers are now interested in where the berry is grown, whether chemicals were used, and whether its cultivation harms the land and water. 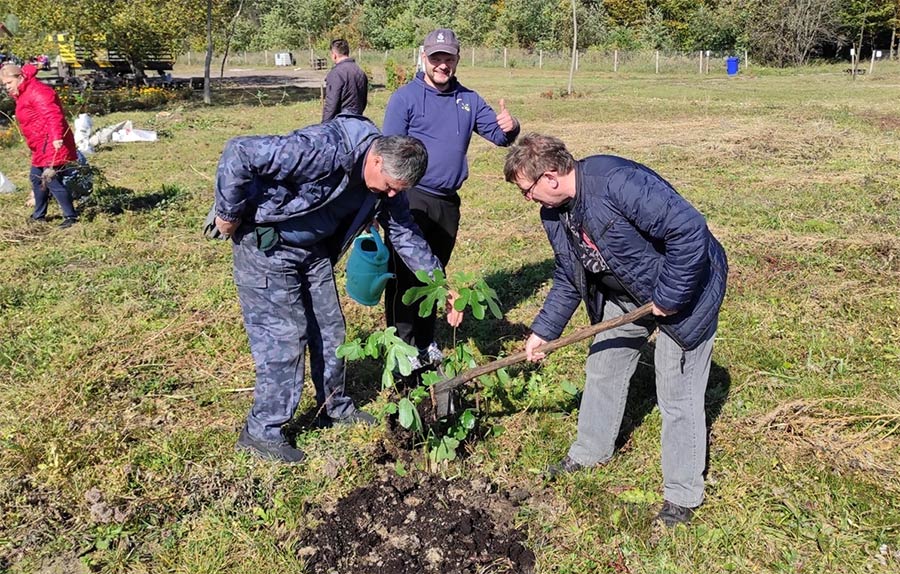 Oleh says that, before planting berries, they consulted with agronomists about what and where it is better to plant, and how to care for the plants. They also conducted water and soil analyses. Just before planting, they applied for the Organic Standard certificate.

After all, an organic product is one grown without using toxic chemicals, synthetic mineral fertilizers, or genetically modified organisms. All conditions that must be met by organic production and products are set in Law No. 2496-VIII. That they are complied with can only be confirmed by a certificate. Without it, it is impossible to apply for a logo and position the product as organic.

Since the field where berries were to be planted had not been used for many years, it was certified immediately. Along with the certificate, Organic Standard provided manuals and a list of protection and fertilizers that can be used and in what proportions.

Now, two years after the first berries were collected from the field, Oleh admits that many mistakes were made in the process of formation.

‘We seem to have approached the choice of culture and field preparation in detail, but today I would have paid more attention to it. Some berries should not have been planted exactly where we planted them. Even though we made the analyses, even though the agronomists gave advice. However, this place still didn’t suit the berry. And on the field next to it, it grows fine,’ he says.

Yak Bdzhola Is Not Only About Bees

The farmer says the name of the farm came along with the idea. To match the name, beehives were placed in the fields where the berries were planted. 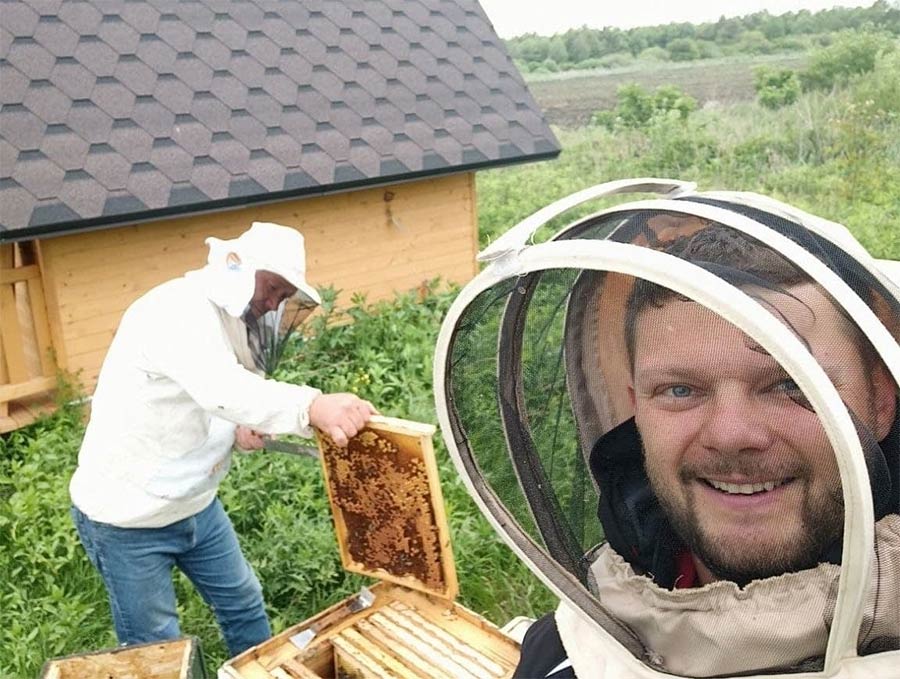 Photo 3. If I wasn’t stung by a bee, the day passed in vain, Oleh Bachynskyi jokes

Now, there are 41 beehives. It was calculated that for one hectare of raspberries, for example, you need 3-5 beehives. The farmers could not expect someone else’s bees to fly to the flowering of berries.

‘Pollination makes it possible to have a bigger harvest. Besides, if pollinated correctly, the berry develops correctly. We also have our own honey,’ Oleh says.

The farm is open and happy to show how it works and how it grows its products. 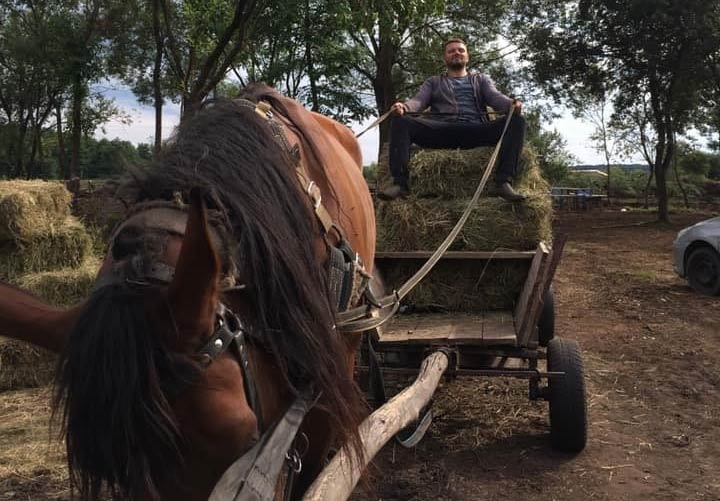 Photo 4. At the farm, one can have a ride on a cart with hay. Photo courtesy of Oleh Bachynskyi

Yak Bdzhola is even engaged in agricultural tourism. One can come here and make sure that strawberries and raspberries grow not on the shelf in the store but in the field. And this is a long process.

For farmers, agricultural tourism is an additional income. However, this service is free for vulnerable categories — orphans and forced migrants.

This year, in the summer, the main agricultural tourists who came to the berry field were children. These are children who were driven out of their homes by the war. Among them are both forced migrants with their parents and orphaned children who left the war zone as part of orphanages. 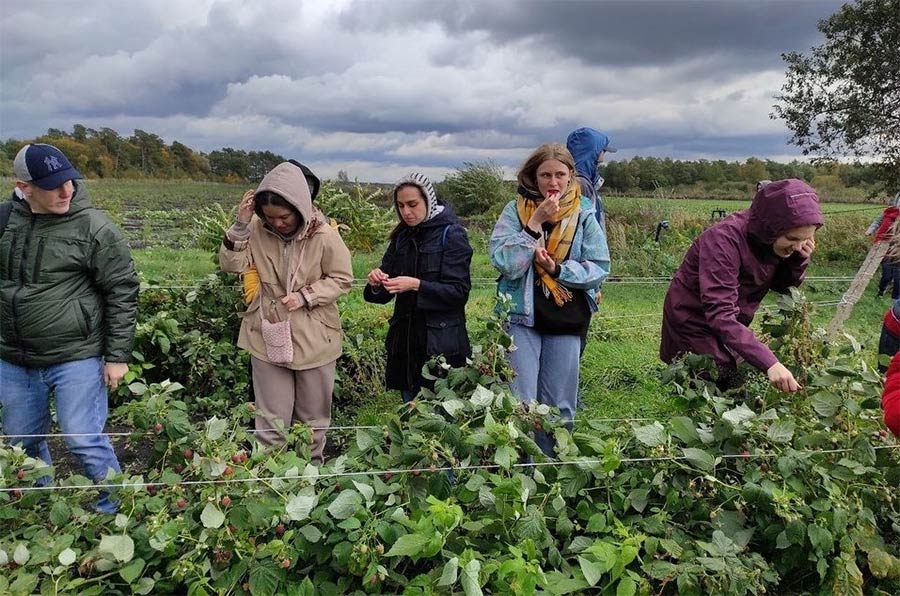 Children have a chance not only to see what grows here and how but also to eat berries from the bush. And, in the forest, there is an oak, which we have already mentioned. Farmers assure that if one hugs the oak and makes a wish, it will surely come true. The children made very grown-up wishes: for their relatives to remain alive, and for them to return to their homes. And for the quick victory of Ukraine over the invaders. 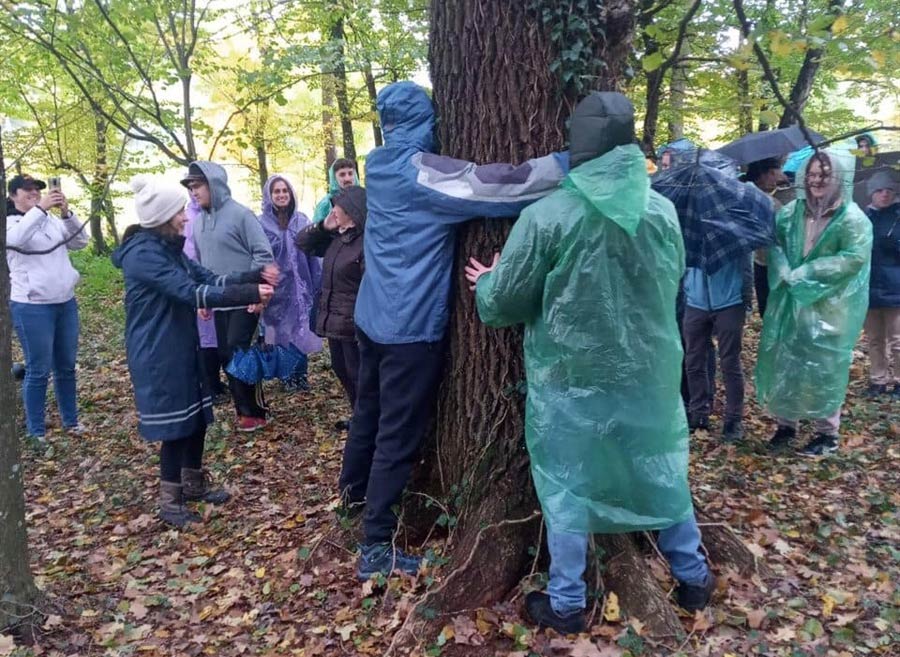 ‘This year we had 36 such groups. And when you see how sad and unhappy they come, and here they have a chance to forget about what they experienced for a day, this brings me the greatest satisfaction,’ Oleh Bachynskyi says.

The Field Is a Virgin Land, Instead of a Tractor There Are Pigs

The fields where the farmers planted berries were left untouched for over 30 years. After the collapse of the collective farms, no one used them, planted or harvested anything. This is good for growing organic produce. However, it increased the work of the farmers.

‘The field was overgrown. We had to do uprooting. We also planted siderates to suppress the growth of weeds. Both rye and rapeseed can be used as siderates,’ Oleh says.

That is, they planted, for example, rye. It grew to maximum greenness and muffled the weeds. Then the field was ploughed over: greenery adds microelements to the soil and suppresses weeds. This is how each new field was prepared for planting. 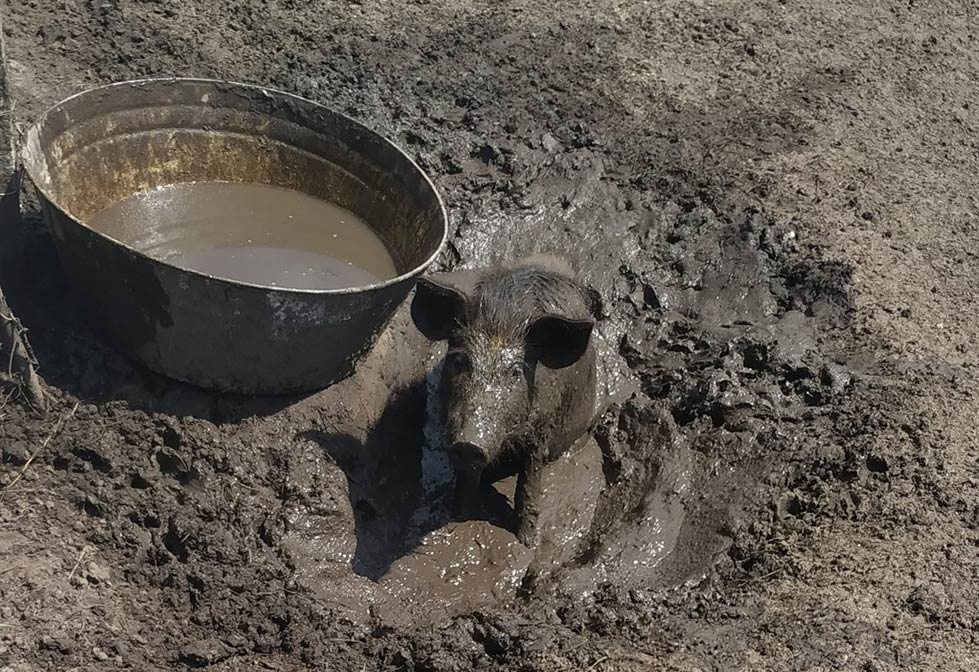 For the fields to be ploughed well, Mangalica pigs were settled here.

‘Part of our territory was still forested. So we got little pigs there. Mangalica is a semi-wild pig. They lived in the fresh air and had a whole hectare of the fenced field with trees. They loosened the ground, ate roots and larvae of pests. And when you go to the field after them, you already have prepared land,’ Oleh says. 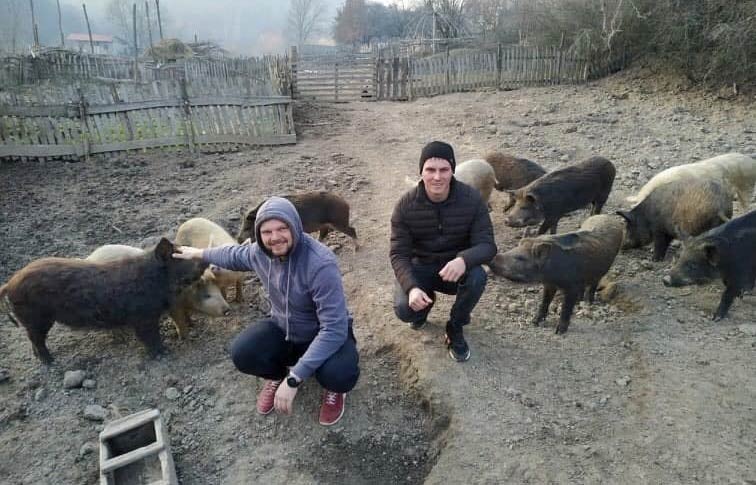 Photo 8. The herd of 21 pigs. Photo courtesy of Oleh Bachynskyi

This technology was recommended by one of the members of the cooperative. Pigs felt and reproduced well. After they processed the fields, the latter were planted with strawberries. Now, this idea has been abandoned as there is no such need.

When asked by the journalist, how the Yak Bdzhola farm differs from other berry farms, the co-owner noted that they grow roses. 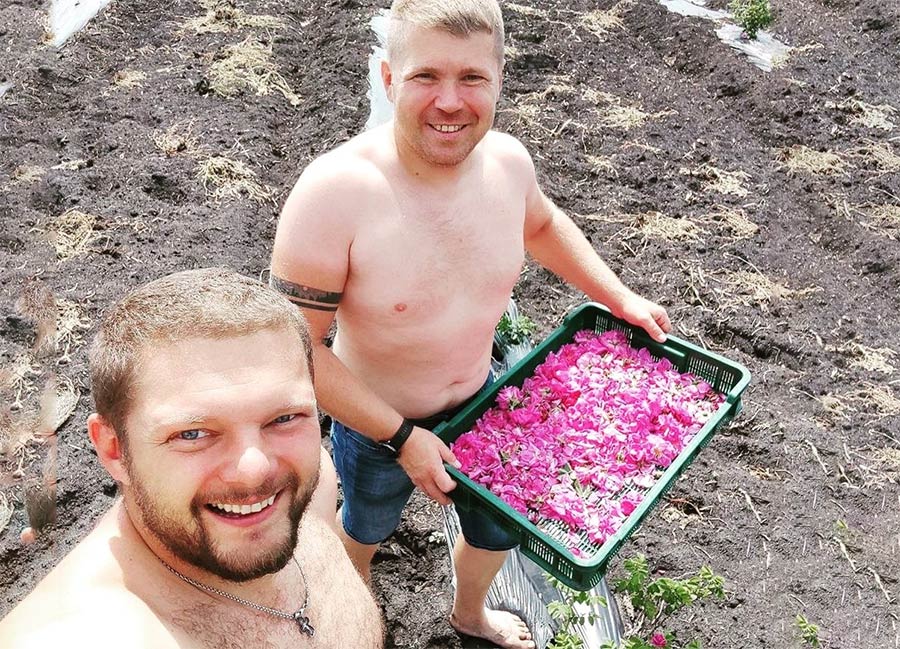 Oleh remembers his grandmother making rose petal jam doughnuts for Christmas. He really wanted to reproduce this taste and emotions.

‘We planted part of the field with roses. We pluck these petals and make jam from them. This year we had our first harvest. We made jam and already sold everything,’ the farmer says.

Summarizing, Oleh Bachynskyi admits that the implementation of ecological practices is expensive and does not always pay off.

‘People say: let’s eat organic and healthy products. And yet, when they come to the market and choose between strawberries for UAH 60 per kilo and ours for UAH 80, they say, “they are the same.” It is difficult to explain to people that our product is different both in terms of taste and health benefits,’ he notes. 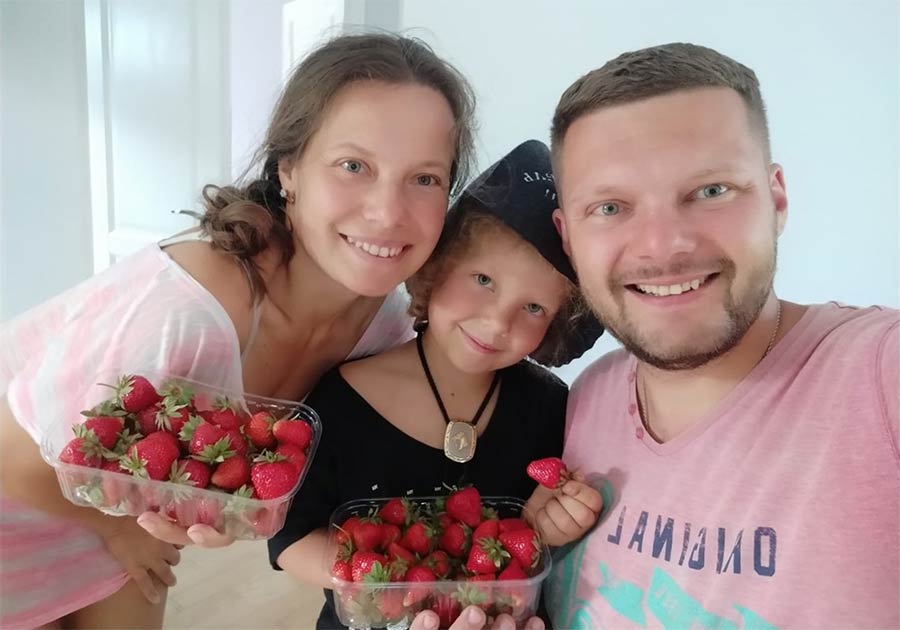 The farmer noted that when starting the work, they immediately planned that it would be organic. However, the business plan, drawn up by them and experts with decades of experience, needed supplements and clarifications during implementation. It turned out that the costs of growing organic products are ten times higher than for non-organic ones. Also, business plans drawn up for peacetime need correction in times of war. Oleh Bachynskyi says that not a single Russian missile fell on their field. However, due to Russia’s shelling of Ukraine, the entire supply chain was broken. That is, what farmers expected to receive in a certain time frame, arrived several weeks later, when it was already too late to use it on the farm.

Organic agriculture is one of the approaches to ecologically balanced food production. The issue of a healthy environment is the issue of food security, access to food and the key to a healthy life. After all, agriculture needs a clean environment: healthy soils, accessible and unpolluted water, favourable weather conditions and a variety of sustainable ecosystems.

However, organic farming is not the only approach to more sustainable farming.

The material was prepared within the framework of the Perspectives for Sustainable Development of Rural Areas project with the financial support of the Ministry of Foreign Affairs of the Federal Republic of Germany.