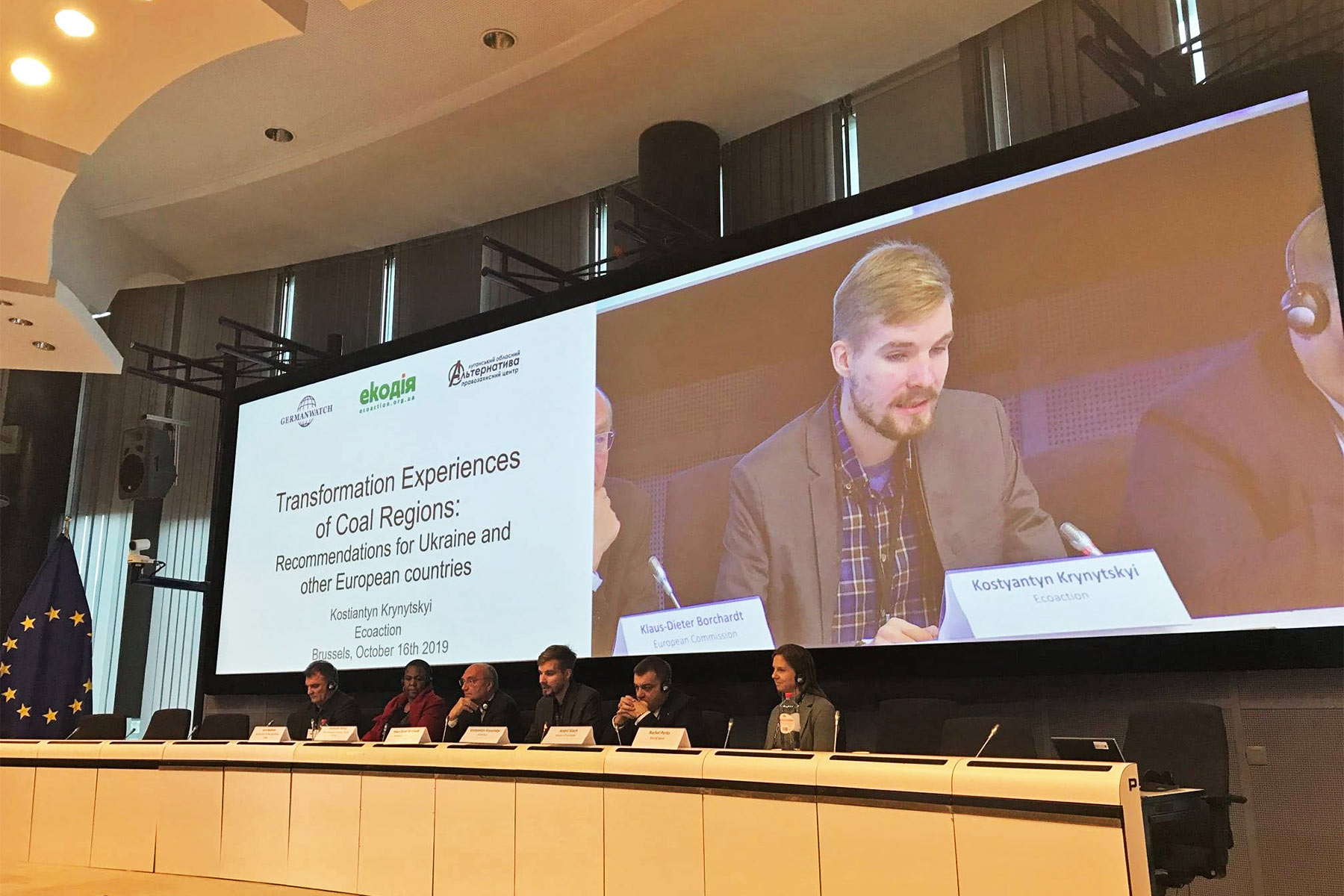 At the 6th Working Group Meeting of the Coal Regions in Transition Platform, which was held on October 16th in Brussels, Ecoaction has presented the full version of the study “Transformation experiences of coal regions: Recommendations for Ukraine and other European countries” to the representatives of the European Commission, financial institutions and coal regions of other countries.

Independent experts from 4 European countries, after analyzing the processes of coal companies’ closures in Germany, Romania, the Czech Republic and some towns in Ukraine, have compiled a list of specific recommendations for the Ukrainian authorities on how to manage coal mines’ shutdowns with less negative social and economic consequences.

What is the relevance of the study?

Ukraine is gradually closing down unprofitable and outdated coal mines. According to the Ministry of Energy and Coal Industry 68 state-owned mining companies have closed since 2004, another 19 are in the process of liquidation or are preparing for it. Between 1991 and 2018 the number of employees at state mines decreased from one million to 42,000 people. The purpose of this study is to initiate a discussion on the future of coal miners and the economic restructuring of the region.

During a meeting in Brussels, Kostiantyn Krynytskyi presented a list of recommendations for the national authorities that сan help manage the process of mines closures keeping it sound from an economic perspective, as well as having minimal negative social consequences:

“It takes several steps for a Just Transition of coal mining regions. The first is to set up a Commission for Structural Changes, which will include representatives of all stakeholders and local population. This institution must develop recommendations for further restructuring plans, taking into account the interests and needs of local residents.

The second step is to set a coal phase-out date in the energy sector and to stop any and all subsidies to the sector. Also, special funds for diversification of the economy, infrastructure development, pensions, education, etc. must be created”

Andriy Silych, mayor of Vuhledar (Donetsk region), also spoke during the plenary session of the Coal Regions in Transition Platform. He presented the creation of the Platform for the Sustainable Development of Coal Towns of Donetsk Region and future projects that will help with the decarbonisation of coal mining regions. One of them is in the field of RES. It is expected that PV power stations and collectors will be installed on the roofs of municipal buildings to produce clean energy. Therefore, the project will demonstrate that it is possible to move away from coal combustion.

Other plans include creation and introduction of new programs to local educational institutions and their overall adaptation to new opportunities in business, innovation and the labor market.

We would like to remind that on May 21st, 2019, representatives of local authorities and civil society of Vuhledar, Dobropillia, Myrnohrad, Novohrodivka, Pokrovsk and Selidove signed a Memorandum of Partnership and created a Platform for Sustainable Development of Coal Towns of Donetsk Region. Such cooperation will help to implement the principles of sustainable development; strengthen partnership through social and economic development of the communities; transform the image of territories; reduce greenhouse gas emissions and raise the level of well-being of the population.

Executive Summary of the study “Transformation experiences of coal regions: Recommendations for Ukraine and other European countries” was presented on June 12th in Kyiv with the participation of members of the public, ministries, coal mining towns and the expert community. The research was carried out within the framework of the project “New Energy – New Opportunities for Sustainable Development of Donbas” implemented by NGOs Ecoaction (Kyiv, Ukraine), Luhansk Regional Human Rights Center “Alternativa” (Kyiv/Donbas, Ukraine) and Germanwatch (Bonn/Berlin, Germany).